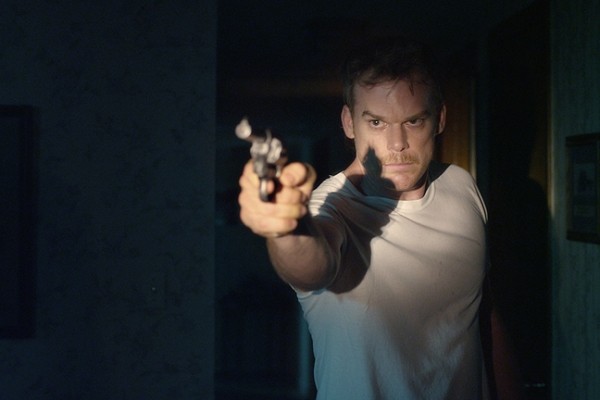 Mention Joe R. Lansdale to someone familiar with his books, and watch the crooked grins start to form. First identified as a member of horror fiction’s short-lived ’90s “splatterpunk” movement, the author quickly separated himself from the shambling, zombie-dependent pack with a deceptively folksy style that straddles the fences between mysterious and overt, Western and weird. Think Jim Thompson crossed with Harper Lee, topped off with a gift for darkly comic escalation that would make Wile E. Coyote raise the white Acme flag. He’s got chops, is the point I’m trying to make.

Cold in July, an adaptation of one of Lansdale’s leaner and meaner books, feels almost sedate when compared with a previous cinematic example of his work, 2002’s gonzo-by-grand-design Bubba Ho-Tep—though, granted, that statement could also apply to 99 percent of the known universe. When judged against most other movies, however, the narrative feels thrillingly unhinged, hotplate skittering between bad and worse scenarios with an absurd, assured ease.

Director Jim Mickle and co-writer Nick Damici—whose earlier Stake Land and We Are What We Are showed a definite knack for the genre mashup—successfully translate the novel’s shaggy-dog storytelling muscle to the screen, fashioning a terrific small-scale suburban noir that scores some cogent points about the bonds between fathers and sons as it hurtles along. When a movie’s final act can pull off a trick with a lightbulb that would shut up Tarantino and make the lyrics to a song by the cheeseball band White Lion seem momentarily profound, you know that all cylinders are firing.

Set in 1989, the story opens with small-town Texas family man Richard Dane (Michael C. Hall) awakened by a bump in the night, with violent consequences. As he struggles with the aftershocks of his act of self-defense, a series of not-quite-right events bring him into proximity with the vengeful ex-con father (Sam Shepherd) of the man he killed. Then things change. And then they change again.

John Carpenter gets a shout-out in the end credits here, as the film is positively filthy with his fingerprints, ranging from the assuredly minimalist camera moves, the deeds-not-words actions of the main characters, the font used for the opening credits, and the pulsing, almost parodic electronic score; the presence of Kurt Russell’s son Wyatt in a secondary role is most assuredly not by chance. Mickle may make his influences easy to spot, but he also brings a lot to the table that’s distinctly his own, utilizing his slow-burn horror experience to keep the screws turning until the final sprint downhill. When the climactic gunplay does occur, it’s of the messy, unchoreographed variety that some filmmakers take a lifetime to figure out how to stage.

He’s also got a way with his actors. Hall, rocking a bewildering combination of mullet, mustache and brushpopper shirt, is a compelling audience identification figure, one both rational enough to realize when he’s out of his league and not quite sharp enough to get out when the getting’s good. Shepherd, meanwhile, makes for a fantastically laconic sounding board, shifting between menacing and tragic without ever losing sight of the character’s other dimensions. He’s a man of few words, but they all have an impact.

The true corker, though, proves to be Don Johnson as one of the least inconspicuous private eyes in recorded history. The actor, always distractingly self-conscious as a leading man, here seems to truly relish his third-banana status, going big with an infectious glee; he’s also been gifted with Lansdale’s most quotable lines of dialogue, which definitely helps. Together, they keep the narrative tenaciously on the rails, even at its most potentially preposterous.

Well-crafted genre films can be easy to over-praise, especially during a time when efficiency and originality seem to be arts lost by the majors, and Cold in July does definitely have a few off-putting bumps as it approaches its destination, most notably in the near-to-total lack of female characters. It’s a man’s world, even more so than in the novel. What does work, though, feels fresh and unpredictable enough to seek out as soon as possible. Whatever weird dimension Lansdale and Mickle’s collective mojo hails from, the movies could stand a whole lot more of it.