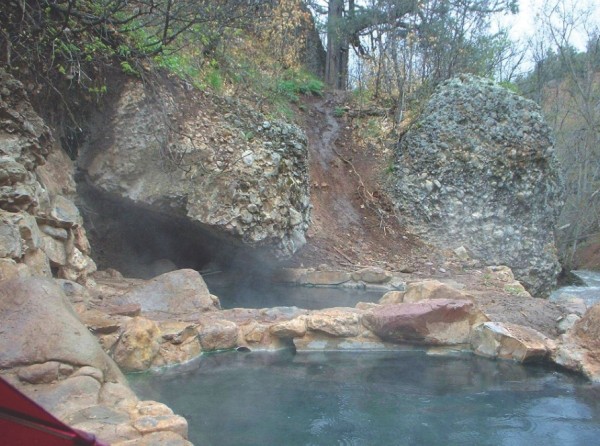 Going to Diamond Fork Hot Springs in Spanish Fork Canyon is a rite of passage for all those who live in Utah.

At the time I was inducted, I was certainly younger than most people you find hiking into the springs these days. I wasn’t young enough to be carried in on my parent’s back, but I recall the backs of people’s knees, the sound of adult voices mixing with the rush of water and the sight of a fast-flowing river that looked dangerously close to the trail.

A few years ago—but long after my first trip, after graduating high school, moving away for college, then returning to work for the National Forest Service—these memories of Diamond Fork called to me. Nearly hidden in the cloud of childhood memory, the place seemed distant and hushed, like a well-kept secret. I needed to find that magical place again.

And so I went, in the dead of winter, with a single companion. We followed the scent of sulfur up the narrow canyon, over a bridge. We found that the steaming pools—each contained by carefully placed stones and concrete—were clear and empty and hot, just as we had imagined.

These days, I’d hardly call Diamond Fork a well-kept secret. When I pulled up to the winter-closure gate with a small group of friends early on a recent Sunday morning—we hoped church might keep some people away—dozens of cars lined either side of the road. Along with Utah plates were a few from Washington and Idaho. And as we stood around collecting our backpacks and skis, a small SUV with Illinois plates pulled up and rolled down the window. “Is this the trailhead to the hot springs?” asked a young woman.

Winter makes access to the springs a little complicated. The Three Forks Trailhead—10 miles down Diamond Fork Canyon, a turnoff from Highway 6 out of Spanish Fork—is where cars normally park in the summer months. From there, the pools are only a 2.3-mile walk. But when the Forest Service closes its winter gate, that distance doubles. There was a time when that seemed to deter the crowds that flock to the pools in the summer—but judging by the line of cars, it no longer does.

A thin sheet of trodden snow, nearly as slippery as a hockey rink, covered the road behind the closure fence. We set off at a fast pace. After quickly passing a handful of groups that had set out just before us, the trail seemed remarkably empty.

Two hours later, climbing up the last incline, we found the pools already inhabited, except for one. It was a large pool, more than enough for our group. Through the clear water, tinted green like old glass, the pebbles on the bottom looked smooth and inviting. Bubbles boiled up from between the stones. We undressed, and someone broke the surface with a toe.

A half-minute later, we had invited ourselves into the smaller neighboring pool, disturbing a man who had been enjoying the quiet and solitude. He didn’t complain. He too had tested the waters of the larger pool and found them nearly hot enough to melt skin—a consequence of winter, when the cold river isn’t high enough to flow into the hot pools.

By the time the groups we passed on our way in had finally caught up with us, we’d finished our cheese, pears, whiskey and conversation and were ready to dry off and head home.

There are times that I have hiked to Diamond Fork Hot Springs alone at the break of morning. There are nights when I started the trek well after dark. I have left the pools under the light of the moon. I have slept out in the canyon overnight. There is not a single trip that I don’t remember fondly—and this one, I knew as we slid back down the icy trail, was no different.