Comics | Blinded With Science: Doktor Sleepless serves up a densely plotted vision of a bleak future.

Warren Ellis—one of the most prolific writers in the comic industry—has written just about every kind of book imaginable, spanning genres with the greatest of ease. The one thing he’s been threatening to do for years but just never got around to was a “mad scientist” story. With his affection for science fiction and technology (he writes a monthly column for SFXDoktor Sleepless was born—only it wasn’t the campy story with a so-crazy-it’s-funny lead character most people expected. The book turned out to be a dense, complex tale starring a sympathetic villain—and a lot of times, one that came across as too smart for its own good. magazine), and his status as a self-proclaimed “futurist,” it seemed like his take on such a character would be a sure thing. Last year, his threat became a promise and


The story centers on brilliant scientist John Reinhardt, who mysteriously disappeared from his hometown of Heavenside three years ago. He has since returned, having reinvented himself as the mad scientist Doktor Sleepless. He controls the airwaves of the town with random speeches about how the future that the people were promised is never going to happen. He’s planning something in retaliation, but no one is quite sure what it is—and with Ellis in charge of things, it probably isn’t good for anyone.

Ellis has said in an interview that the story of Doctor Sleepless came to him as he was thinking about our own future. He posted the following quote on his Website before the release of the series: “You are never going into space. You will never own a jetpack. Your car will never fly. Someone stole your future. Don’t you ever wonder who?” From this statement, it was clear that Sleepless wouldn’t be just another mad scientist. 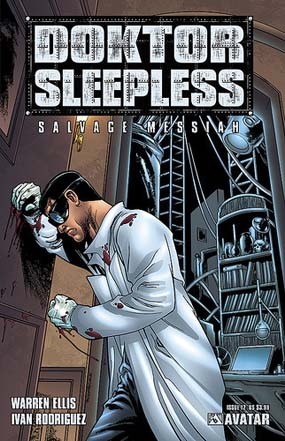 Ellis is obviously more influenced by H.P. Lovecraft, Nikola Tesla and Aleister Crowley than by Victor Frankenstein, and he goes into great detail explaining why. The town of Heavenside is littered with characters like Contract Police (private security firms whose services are available to the public for a fee) and Grinders (lower-class citizens who engage in extreme body modifications and look at Sleepless as their newly returned messiah). Grinders and Contract Police are just a couple of things that Ellis has decided are more futuristic—and realistic—than flying cars. The world that Doktor Sleepless inhabits is very much grounded in reality, and there’s a lot going on at once in the book. The pages are text-heavy, and a lot of information is dispensed—much of it requiring careful (and on some occasions, repeated) reading to understand.

Artist Ivan Rodriguez handles the task very well, with clean art that makes the visual part of the story easy to follow. And every once in a while, when Ellis does unleash his own version of Lovecraftian monsters, Rodriguez shines, showing off an understanding of the story that most readers will miss.

It’s not to say that Doktor Sleepless isn’t an entertaining book—because it is. The story and characters are both well fleshed out. But the concept leaves little room for the craziness that Ellis is so capable of throwing around. With taglines like “Bastard of Tomorrow” and “Engineer of Your Future Doom,” it’s clear that Ellis has a bleak outlook on things to come. Hopefully it will translate into a great payoff—one that requires only a single reading.

IN BRIEF
Final Crisis: Rogue’s Revenge
DC Comics golden boy Geoff Johns made his name with one of the best runs (over 60 issues) ever on The Flash. In the mind of most fans, he left before he really got a chance to tie up everything he started. In a tie-in/spin-off that’s more satisfying than the main series, Rogue’s Revenge reunites Johns and collaborator Scott Kollins on The Fastest Man Alive—and it’s everything anyone could have hoped for. (By Geoff Johns & Scott Kollins; DC Comics)