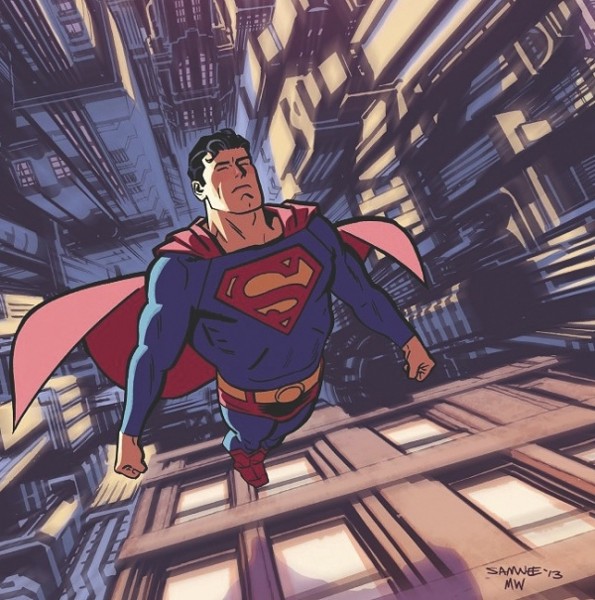 A foofaraw has been brewing in the world of comics, and it involves our great American comic hero, Superman, and former local boy, science-fiction author and well-known opponent of the rights of same-sex couples, Orson Scott Card.

DC Comics hired the outspoken Card to write the first two issues of a new, digital-first comic starring everyone’s favorite Kryptonian. Unsurprisingly, there has been an outcry over the cognitive dissonance of the thing. Superman represents the ideal in American culture, fighting for the underdog. Card, on the other hand, has attached himself to the National Organization for Marriage, which is inappropriately named for how much marriage they work hard to prevent. As a board member, he has helped oversee things like Proposition 8 in California and the defense of the inappropriately named Defense of Marriage Act.

More than that, though, he has written in scathing and hurtful ways about the LGBT community and has prophesied the doom of the world if they’re allowed to marry.

It’s not exactly a mainstream position. And as most comics fans are laid-back and supportive of their LGBT brothers and sisters, a boycott has ensued.

I’m conflicted about this. While I agree that Card’s opposition to equal rights is despicable, I have an easy time separating artists from their art if I like it. It’s why I still love Roman Polanski films. I’m doubly conflicted as I took many a creative-writing seminar taught by Card in my school days, and he was always a perfectly wonderful, charming guy and a reasonably good writer.

To help me sort through my disgust with Card’s medieval views on love and my much more modern love of Superman, I turned to Troy Williams, public affairs director for KRCL and fellow rabid comic nerd, for perspective.

“Orson Scott Card reminds me a lot of Superman’s archnemesis Lex Luthor, who is also absolutely obsessed with Superman,” Williams says. “Luthor is so consumed by jealousy of Superman that he ultimately spends his entire life fighting against him. Card is also so obsessed with gay people that he works tirelessly to ostracize us from the institutions of American culture. Superman, on the other hand, does not discriminate. He risks his life daily to defend all of us.”

To my mind, it’s a fair assessment. Who else but a sociopathic super villain would fight against someone or something that is so clearly good for the world if it weren’t from a deep-seated personal fear?

Will a boycott of his comic change Card’s mind? Would it change Lex Luthor’s? I doubt it. But anything that rallies people against homophobia and outdated modes of thinking is a good thing, right?

Williams is even more optimistic about the outcome. “In Grant Morrison’s All-Star Superman, Lex Luthor drank a vial that temporarily gave him Superman’s enhanced powers so that he could ultimately destroy him,” he says. “But, unexpectedly, Luthor began for the first time to see the world through Kal-El’s all-inclusive and all-loving eyes. Luthor, for the first time, saw the harmonious structure of everything. Superman’s worldview ultimately offers redemption for his longtime adversary.

“So, who knows?” Williams continues. “Perhaps if Card spends a few hours inside Superman’s head, thinking his thoughts and writing his words, something powerful will happen. Perhaps Card, like Luthor before him, will have his irrational jealousy and xenophobia annihilated by the pure love and super-enlightenment of Kal-El of Krypton. We can hope.”

We certainly can. And we can still skip those two issues of Superman. Boycott notwithstanding, if you’ve read Card’s run on Iron Man, you’ll know you’re probably not going to miss much.