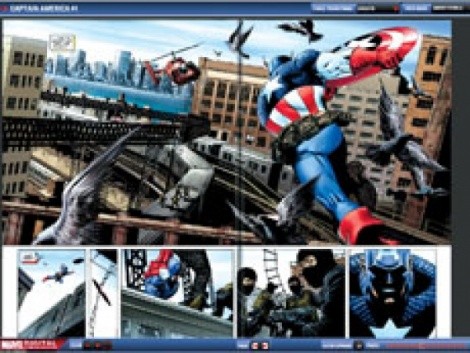 Minutes after opening the door, Black Cat Comics is already full of customers eager for their weekly fix of comics. It takes three employees to keep things running smoothly, but owner Greg Gage handles it like a seasoned veteran and is sure to greet everyone the moment they set foot through the door.

Shop owners could be hard-pressed to see a scene like this in the near future, as Marvel Comics took a bold step earlier this month by releasing a massive amount of its comics online. While users aren’t currently able to download any of the books, they are still able to read through over a thousand titles for a small monthly fee. Just as traditional record stores have had trouble competing with iTunes and a slew of other music sites, comic shops could find themselves in a similar situation sooner than they’d like.

“I think it’s a good idea, but I’ve still got mixed emotions about it,” Gage says. “It’s aimed at younger kids that spend a lot of time on the Internet. And if they can read all this stuff online, they won’t need to leave the house. But those are the kids that come in to my store.”

Right now, Marvel is the only company offering a significant number of comics online, and the company sees it as a way to reintroduce people to the X-Men and Spider-Man by offering up early issues in which they appeared. And, as is the case with most good ideas, if it makes them money, others may be right behind. Publishers Dark Horse and DC both currently offer a few titles for free online, but most are just previews of new series or first issues of a current ongoing series—which is what most shop owners would prefer.

“The Hood is huge in the Marvel Universe right now,” Gage says. “They should put up the first issue of The Hood miniseries, and if people like it, they can go out, pick up the collection and jump onboard. It all depends on how they advertise it.”

Marvel’s current focus is on older issues and says that nothing will appear on the Internet until it has been in print at least six months. But even that’s something that Greg feels might not be the best idea.

“If someone gets online to read Amazing Spider-Man No. 1 from the ’60s, they might get through it and say, ‘Wow, comics were lame!’” Gage says. “I’d rather them put up newer stuff to avoid that. Because, if you didn’t grow up knowing that’s how comics were written back then, it might turn people away real quick.”

The retailer fear is justified with record stores and major labels struggling to keep up with the wide reach of the Internet. But, most comic fans see the collecting part as a bonus to the stories being told and still love being able to have something they can hold in their hands. That doesn’t mean things can’t change, though. People used to say the same thing about CDs.

The Unfunnies
Back in 2003, Mark Millar said The Unfunnies would be a nontraditional horror story and catch a lot of people by surprise. The first two issues shipped and then the title disappeared. The writer said it was due to a series of legal and contractual issues and that things would be resolved in no time. Four years later, the final two issues are out—but not quite worth the wait.

Trying a new approach to horror, Millar used Hanna-Barbara-type cartoon animals and set real-world scares such as pedophilia, abortion, rape, murder and prostitution in their safe little world. It seemed that Millar was trying to comment on the adult-oriented subject matter through characters he loved as a kid and used it as a device to throw in some crude jokes. It’s uneven all the way through, and maybe a sign that Millar should have made use of the downtime to rework things a little. (By Mark Millar and Anthony Williams)