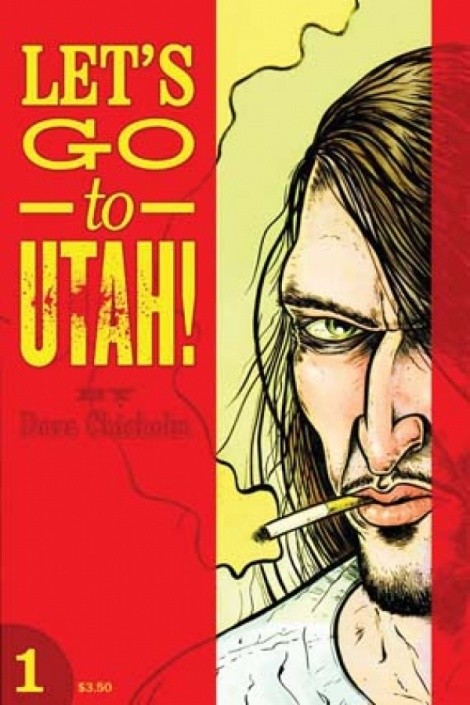 A comic book is so much more like a song or an album than it is like a painting hanging up on the wall,” says Dave Chisholm, a Salt Lake City musician best known for his roles in Salt Lake Alternative Jazz Orchestra (SLAJO) and Let’s Become Actors. “When done right, the artist controls how fast you read it. The artist controls the pace. You can’t see the whole thing at one time. You have to sit down and take it in how he wants you to take it in.”

Chisholm—a classically trained multi-instrumentalist with a degree in jazz composition from the University of Utah—should know. After spending much of his life playing gigs, recording and engineering albums, he recently hit a wall. He needed a change and so he—quite literally—went back to the drawing board.

“I guess I was just really bored with music for a long time,” Chisholm says, adding that his split from The Brobecks—three out of four original members bowed out last year—left a particularly sour taste in his mouth. “At that point I looked at my life and I was like, ‘What am I going to do? I know I can write songs, but the goal of being a big rock star is just kind of [unappealing].’”

Chisholm caught a whiff of mainstream success with The Brobecks, but quickly lost interest in its supposed perqs. “We got invited to parties in Hollywood and stuff like that. I realized your talent has nothing to do with it at all. It’s all about how you look, and networking and schmoozing and being willing to sell out,” he says.

So he decided to return to school this fall to pursue a graduate degree and get on track to fiscally responsible “adulthood.” Along the way, however, he rediscovered a significant part of his youth through comic books. Inspired by news of Heath Ledger’s Joker role in the upcoming Batman movie, he picked up a pen and started sketching. Much to his surprise, the drawings weren’t half bad. He began frequenting Black Cat Comics, and stumbled on the work of Paul Pope. Suddenly, the wheels started turning at warp speed.

“It was like the first time I listened to Miles Davis and really kind of understood it. Or, the first time I heard [Radiohead’s] ‘Paranoid Android,’” he says of his key musical inspirations. “It was kind of that same moment where you’re like, wow, this is really amazing.”

He considered collaborating with a skilled writer, but subsequent story pitches fell flat. “I was just looking for something really specific,” he says. “I realized that the only way I could really do that was to do it myself.”

The result is Let’s Go to Utah, an ominous page-turner that dives right in and never lets up. Using a road-trip model to capture the comic book’s episodic nature, Chisholm places his characters in near-perpetual motion. They cruise through a desolate desert landscape with blood on their trail. Some scenes depict nothing but flimsy clouds; others zoom in on a killer’s grizzled mug. The plot unfolds like a gripping TV series—or, as Chisholm prefers, an epic song.

“Too many times when I look at comic books, the artist has put too much time into every panel. It screws up the pacing. Some panels should look almost incomplete, where you want the reader to zoom right through those panels and then you want them to stop and look at them. That’s your money shot.”

Let’s Go to Utah opens on Dave (loosely modeled on Chisholm’s 18-year-old self, only less ambitious) in a holding pen, explaining how he wound up riding shotgun to a murderous psychopath named Leif (based on one of Chisholm’s friends, minus the blood-thirst). Most of the characters are based on people he knows, with the exception of a crazy trucker from the movie Breakdown.

Turns out, it all started with a recurring nightmare, which means Chisholm had to map out the entire series before printing issue No. 1. “I had to figure out clever ways to integrate the dream sequence into the story in multiple ways so it’s not just this one instance of this cowboy with no head,” he says.

Once the work was completed, Chisholm posted it on comic book Websites to generate interest. “I didn’t want to submit it to publishers yet. … I just wanted to do it on my own terms, on a small level, so when I do go to a publisher I can go ‘Look, I already sold x copies of this without any marketing. It’s something that can totally sell,’” he says.

Chisholm’s first run of 40 issues sold out within weeks. Keep an eye out for copies around town. Or just visit LetsGoToUtah.com.