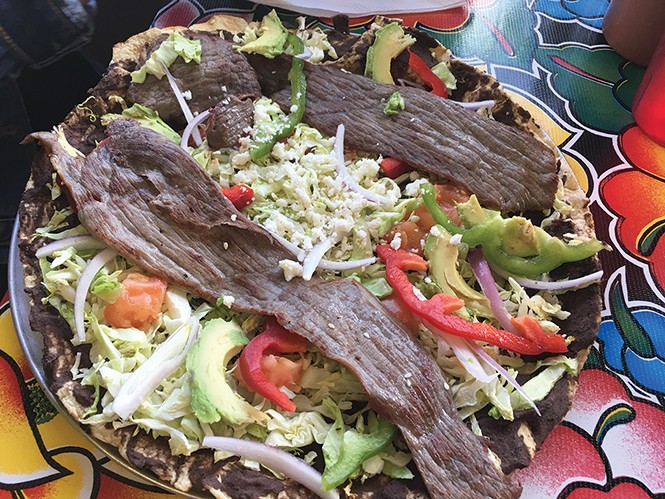 As Mexicans—but not all Americans—know, Cinco de Mayo is not Mexico's Independence Day, which falls on Sept. 16. May 5 commemorates the Mexican Army's against-all-odds defeat of French forces at the Battle of Puebla in 1862. In the U.S., Cinco de Mayo—like so many holidays—has largely turned into an excuse to party and overindulge. I'd rather use the holiday to remind ourselves of the abundant breadth of regional Mexican cuisine that local restaurants serve, and to salute the many immigrants who keep those restaurants running.

During my time in college and graduate school, I spent a fair amount of time in Mexico, especially in Oaxaca. Some of my favorite memories are of walking out of bars or clubs late at night and buying tlayudas from the women whose cooking carts lined the streets. A tlayuda is a regional treat—a crunchy, thin, pizza-sized tortilla that's been toasted or fried, usually over coal or wood, smeared with a base of refried black beans, lard, shredded chicken, beef or pork, and topped with cabbage or lettuce, avocado, Oaxacan cheese and salsa. Resembling a tostada, it's perfect for late-night noshing.

Until recently, I'd never found one in a Utah restaurant. I have come across tlacoyos, but that's a different animal altogether—a thick, stuffed, toasted cake made from masa. Who'd have thought my quest for tlayudas in America would end in mid-town SLC? La Oaxaqueña is a small, inexpensive eatery that serves up not only tlayudas, but other specialties from southern Mexico such as mole. Here is an excellent spot to visit on Cinco de Mayo, or anytime.

The most expensive item on the menu is a grilled carne asada steak ($13.75), which comes with rice, refried beans, salad and two housemade tortillas. About those tortillas: They are other-worldly. Thick, piping hot and hearty, they're among the best I've ever eaten. House specials include a cheese-covered cactus dish called nopal Zapoteco ($12.99) and molotes ($7.99), which are croquette-shaped, corn-based pastries stuffed with potatoes and chorizo. A plate of Oaxacan-style tamales is a mere $5. The restaurant also serves breakfast, with dishes like chilaquiles, entomatadas, eggs with ham, chorizo or sausage, and enfrijoladas—a type of enchilada smothered in creamy black bean sauce and Mexican queso fresco. You get the idea: This is the real deal.

The tlayudas ($9.99) brought me back to my college days, and the love of biting into those crisp, smoky tortillas. There are several topping options, but I like the most traditional, which comes with the aforementioned standard toppings, plus thin strips of cecina (dried beef). On the table are bottles of fresh green and red salsas. The m0le is another reminder of my days spent in Oaxaca. The eatery offers five classic takes: negro, rojo, Coloradito, amarillo and verde. I haven't worked my way through all of them yet, but based on initial impressions, the moles here are as delectable as you'll find anywhere. Mole negro is the prototypical Oaxacan mole, a blend of rich, dark chiles such as ancho, pasilla, guajillo and chipotle, plus a slew of additional ingredients that typically include raisins, Mexican chocolate, dried avocado leaves, cinnamon, plantains, onion, garlic, nuts and cloves. It's an incredibly complex and layered taste experience, and the mole negro here, sprinkled with sesame seeds, is wonderful—two mole-smothered chicken leg-and-thigh quarters served with rice and those heavenly tortillas. I defy you to find another dish for $12.99 that is so satisfying.

Small piñatas hang from the ceiling, and Mexican foodstuffs and imported goods are for sale at La Oaxaqueña—everything from huaraches and serving vessels to cheese-bread and toys. Sadly, no beer is available, but beverages range from Mexican Coca-Cola to milkshakes, sweet corn with milk (atole de elote), horchata and fruit drinks with flavors like guava, passion fruit, mango and tamarind.

But wait, there's more! This is actually two restaurants in one. Adjacent to La Oaxaqueña—and separated only by a doorway—is a Salvadoran eatery called Café Guanaco. Pupusas are the main draw here: Traditional thick corn tortillas are prepared with any number of stuffings—such as chicharron (fried pork), revuelta (pork, beans and cheese), chicken, shrimp and steak, among others—and range from $1.99-$2.99.

Tempting appetizers include chicken, pork or corn tamels (similar to tamales), fried yucca with pork ($7.50), empanadas (three for $6.50) and fried plantains ($3.50). The woman who runs the restaurants and does most of the cooking is from Oaxaca, but it's not surprising that she would also excel in Salvadoran food, given southern Mexico's proximity to El Salvador. She is also super friendly and can help out with any language barriers you might encounter.

Bonus: The recently opened Taco's Blanquita in Layton (55 N. Fort Lane, 801-544-5741) is so new that I'm not ready to fully review it yet, but it looks very promising. The restaurant grew from a taco cart that resided outside the La Favorita Mexican market in Layton. In the new digs, the menu is expanding to include tortas, quesadillas and full meals in a well-lit, sit-down eatery complete with a salsa bar. The tacos ($1.50 each) are among the best I've had anywhere, and include carne asada, carnitas, pescado, cabeza, al pastor, tongue, fish and chicken. Stay tuned for more on Taco's Blanquita, and until then, ¡felíz Cinco de Mayo!