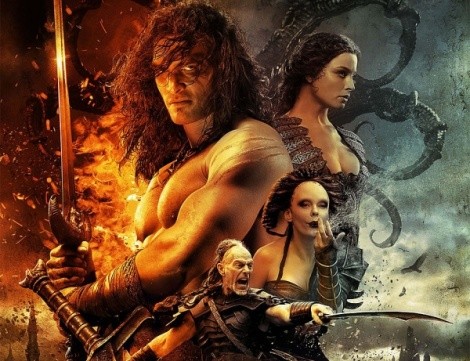 Conan the Barbarian
Jason Momoa (Game of Thrones) stars in the remake no one asked for, about a Cimmerian warrior battling supernatural evil and the custom of shirts in the land of Hyboria. Also starring Rose McGowan as a scary skull. (Lionsgate)

Helldriver
A meteorite hits Japan and turns half the country into zombies, and only a woman (Yumiko Hara) and some ragtag misfits can stop it by killing the Zombie Queen, who also happens to be her mother. Why Helldriver, not Zombie Mom? (Well Go USA)

Moist Fury
In the best faux-’80s revenge-sploitation flick since Hobo With a Shotgun, kung-fu street gang The Queafs are out for vengeance with the help of a mysterious warrior and a terrible/hysterical heavy-metal soundtrack. Is it my birthday? (MVD)

ThanksKilling
Just in time for the holidays: A cursed, homicidal Thanksgiving turkey is killing idiot college students one by one, and apparently no one can or even wants to stop it. Believe the sticker: “Warning: Boobs in the first second!” (MVD)