Condiments with a Side of Condoms 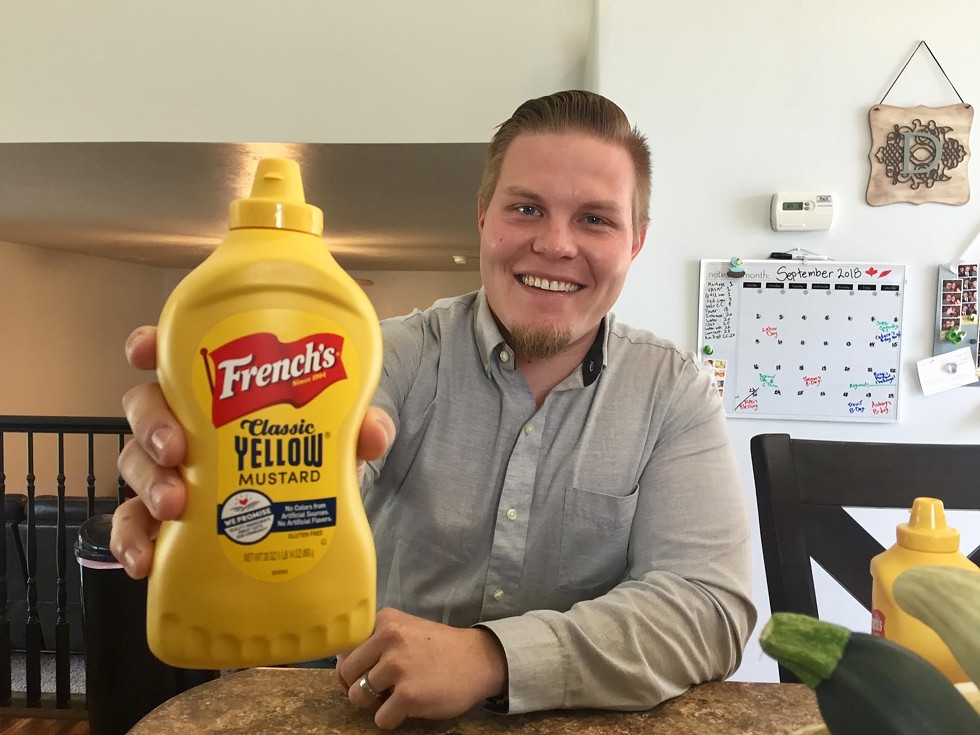 Magna resident Braxton Dutson is planted at his kitchen table, setting the timer on his phone for 30 seconds. The ballcap on his head gets turned backwards—shit just got real. He's all pumped up and ready to ... 1, 2, 3, go.

Dutson punches the phone. The clock is ticking. He grabs a 16-ounce plastic bottle of yellow WinCo mustard, throws his head back, opens his mouth wide and makes like a human shot glass, chugging the thick condiment down as fast as he can, his Adam's apple rolling with each gulp.

Trouble. He can only squeeze the bottle so tight and has to jiggle it to shoot more mustard. Time is wasted.

But it's just a training session for the big show. At noon on Saturday, Sept. 22, in Liberty Park, Dutson will attempt to break the current Guinness World Record for mustard drinking—yep, a real thing that exists—currently held by André Ortolf of Germany, who set it last November.

Ortolf's record is a bit more than 18 ounces in 30 seconds. If he doesn't puke all over himself in the attempt, Dutson thinks he can shatter it.

"The first time I did 16 ounces, my stomach was a little upset. But I had also eaten," he says.

From this practice round, he now knows to try out different bottle caps so he can push mustard out faster. Cold mustard won't do, either—room temperature works best. And no brown mustard or Grey Poupon, just plain yellow.

It turns out Dutson has a more altruistic motive. The potential mustard-chugging champ is also a certified family therapist who's using his record attempt to get parents to start talking to their kids openly and honestly about sex—to "mustard" up the courage, as he puts it.

"I was looking to do an awareness event about sexual health," Dutson says. "And I really like mustard. Growing up, it was kind of a joke where I would pull out mustard from the back of the fridge and go 'I'm so hungry,' and drink it and gross people out for fun. So one day, I decided to look up what the record was. Then, I wondered if I could actually drink a lot."

Stunts aside, the lack of sex education in a state dominated by a strong religious culture has always been a touchy topic, and Dutson sees the fallout first hand.

"It's really causing a lot of problems with teenagers passing around STDs and getting pregnant. They don't know about positive sexual health for when they get married," he says. "Newlyweds in my office tell me their parents never talked to them about sex.

"So I want that to end. I want parents to feel comfortable when they talk about sex with their kids, just a little bit at a time, and that will make a world of difference for their children."

It's become a frequent topic on Dutson's podcast, "Birds and Bees," where he specializes in discussions not usually heard in many Utah homes.

"There are so many parents, especially new parents, who tell me they don't know how to talk to their kids about sexual health," he continues, "so they just put it off until they're teens, or sometimes don't talk at all. I really want to end this taboo."

And what better way to get his message out than in a busy public park with lots of strangers shooting destined-for-viral video?

"If I can dominate a bottle of mustard, then parents can 'mustard' up the courage to talk to their kids about sexual health," Dutson says, unable to resist dropping his favorite pun again.

There's an obvious question here if Dutson manages to pull off the record mustard drink—will he go Full Utah and try to set a fry sauce-chugging record next?

"I don't think so," he says, "but I could probably do pickle juice."