These beers may be just the things you need to make it through anti-social times. 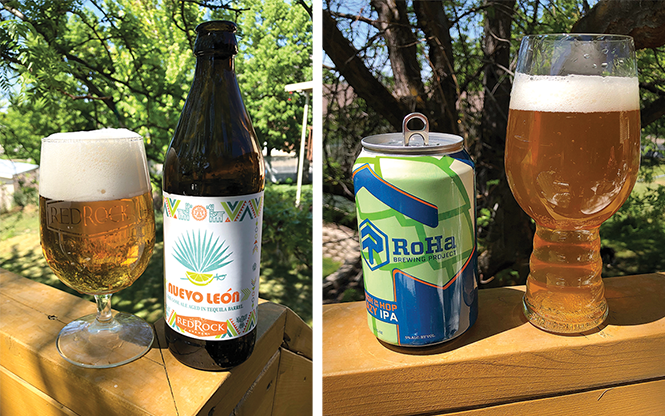 I'm a social drinker, always have been. I love to be with friends or strangers in neutral territory to simply decompress together. Cloisterfuck 2020 has robbed me of this somewhat, but it's also given me a better appreciation of the homefront side of things. This week's selections turned out to be excellent confinement aids to help take your mind off of that ass groove you've created on the couch.

RoHa High on the Hop: At first, I thought this beer was a bit of a fail when I was taking photos of it. For a "hazy" IPA, this wasn't very cloudy. Then I took another look, and found that it's a "lazy" IPA—which has "me" written all over it. The nose is somewhat tropical—there's some pineapple and mango—before it slides into melon with some vague berry notes. It's not pungent, but fruity and herbaceous comes to mind.

As I swig away, everything the nose hints at becomes fulfilled. I get the pineapple and mango briefly, then the melon kicks in—something like a green cantaloupe—before some yellow grapefruit. Those vague berries again begin to make themselves known; I wish I could nail them down, but the citrus peel bitterness keeps them out of reach. This is indicative of very little late hopping, a practice geared more towards the west IPA style or even the emerging mountain style IPAs. There is a lot of flavor here, and I am very surprised that this was achieved in a 5% ABV session IPA.

Quarantine Desirability Rating: Unless you prefer your beer to taste like more of a breakfast drink, this one may not be your thing. I enjoyed this while quarantined with a pot of boiled crawdads. High on the Hop took me from down in the dumps to having a cool time. Its cloistering factor is medium to low, and it took me on an adventure with one of my new boiled crawdad buddies. I subsequently made friends with said crawdad and hung out with him. Man, I miss Crawford.

Red Rock Nuevo León: The aroma suggests lime very clearly, along with some white oak and what I believe is tequila. That's a pretty impressive start, and if they can pull off the flavor, this will be a winner. It's tart, but not overwhelmingly so; you get some lemon-lime twang with just a touch of sweetness from the malt. There's a nice balance, and it ends dry but not too acidic, as just a touch of residual sweet malt lingers. What's missing, however, is the tequila. There's a touch, mainly showing up in the aftertaste, but not nearly as much as you might expect given the aroma. Still, I can live with that given the overall flavor. The one thing that this beer isn't lacking is the oak from said tequila barrel. It adds a nice vanilla character that changes the character entirely. In the mouth it's acidic, light-medium in body and gently crisp. The lingering lime note is very nice. Had the tequila come through more in the flavor, it actually might not have worked as well for me as it ended up. I'm finding the woody vanilla flavors to be very complementary to the salt and lime.

Quarantine Desirability Rating: When this beer was born, it was 4 percent, but its time in the barrel has boosted up to 5.1 percent. Thus, its cloistering factor is also in the medium-to-low territory. However, it did give me a head-swirling dream of being locked up in a Mexican jail with Carl Sagan. I still find myself talking like him when I order Taco Bell: "Star Stuff."