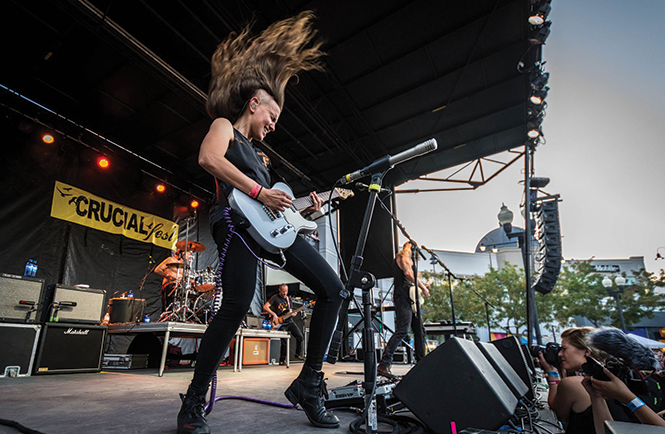 It takes guts to consider what a well-worn Salt Lake City tradition will look like after a pandemic—even more so to wonder if it's even possible to revamp it in the year 2021. But who better to tackle that question than SLC's toughest fest around?

Crucialfest founder Jarom Bischoff is considering just these questions as he eyes launching Crucialfest 10 at the end of the summer. "I wouldn't do it now, I wouldn't do it next month, I probably wouldn't do it in June. But I think the end of August ... I'm optimistically hoping that that's gonna work," says Bischoff, echoing a hope that everyone seems to be clinging to of late, that at least part of this summer can be salvaged for a return to the things we've missed. "The only thing that's gonna stop Crucialfest is if a variant gets out of control and a vaccine is unable to dampen it," he says. "I don't want to do it if we all have to wear masks and social distance, I'd rather just put it off until such a time that we don't have to do those things."

This line of thinking makes sense if you know Crucialfest, which is historically home to heavy music from around the state and country—the kind of music that has pits, a fair amount of sweat and isn't really conducive to social distancing. "There's definitely an excitement in the air about it," Bischoff says, since announcing on March 16 the tentative, Metro Music Hall-based dates of August 26 - 29 "I honestly think people want to show up to a place where they can just hug everyone. That's what I want Crucialfest to be."

He's probably right. Many SLC shows are famously small, much of a night out's atmosphere hinging on seeing half the people you know, embracing them and crushing into the crowd together. But Bischoff also wants Crucialfest 10 to be other things—namely simpler, and more diverse.

"The first thing about this year is that I'm totally changing the business model. We're going to do a free festival this year," he says. The fest was never particularly expensive—past single-day tickets hovered between $12 and $75 dollars—but juggling ticket fees and stressing about attendance revenue made Bischoff a "nervous wreck." "I honestly didn't even enjoy the last few Crucialfests, the ones that have been the big, huge outdoor ones," he says. "I think back to Crucialfest 2, 3, 4 and even 1 as being my favorite ones because they were more about connecting with people I don't see very often, getting the bands that people around here were friends with from out of town to come."

By making it free, and funding Crucialfest with grants, sponsors and fundraisers this time around, shows become more accessible to people from all income brackets, and bands can be paid up front. "I want bands from here to tour, and I want to be able to support bands to do that," he says.

Bischoff is also trying to strengthen the scene by turning to women, who are especially underrepresented in heavy music. "I would like to see attendance for Crucialfest be 50/50, instead of 70/30, which is probably about what it is now," he says. So far, he's turned to Facebook posts asking the women he knows to tell him what would make them feel "more represented and more comfortable," as well as what bands anchored by women they'd recommend. Comically, lots of local men responded to that women-targeted post.

"I just feel like I want to make some kind of an effort to do more on that front, and I don't know exactly what that means ... I'm just asking the community for ideas. I'd like to book bands where at least half of them have at least one woman," Bischoff continues.

And while Crucialfest has always had all-ages inclusion, Bischoff worries that not enough youngsters are interested in rock 'n' roll—hence his hopes to connect with local orgs like Rock Camp, which foster youth interest in music. "It would be cool to do something where it's focused on youth, and [we can] raise a new crop of people to be into independent music," he says, adding that his personal love of this music scene is why he wants its legacy to survive into the next generation.

Whatever kind of lineup he ends up with, some things are certain: The fest will be one of the first post-pandemic efforts of its kind, and it will be scaled back to its more intimate roots. Any emphasis on bigger, famous touring acts will be left behind. "I'm still gonna get at least one really exciting headliner per night to headline each show," he explains. "But that doesn't mean a huge band. Part of the trade-off with making the show free is that I can book a band based on how badass I think they are, how fun they'll be live, how cool they are as people."

For anyone who misses modest shows and unknown bands more than their opposites, it sounds like a fair trade worth looking forward to. Keep up with Crucialfest 10 by RSVP-ing to their Facebook event, which can be found at facebook.com/crucialfest.