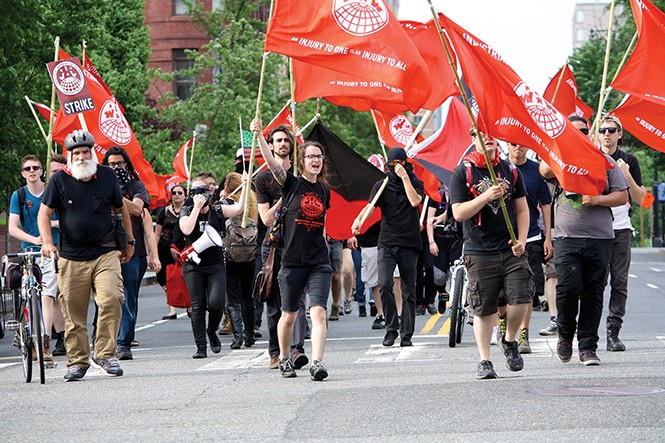 A year ago, after the presidential election, Dylan Petrohilos hung an Antifa flag in front of his house.

"I had [the flag] flying outside my home because Trump was elected and there was a belief he was a fascist ... so we had this idea that we needed to bring back the moniker of anti-fascism," Petrohilos says at a bar while discussing the Washington, D.C., Riot Act case with other protestors arrested during Trump's inauguration.

When D.C. police Petrohilos' home in April, the flag was the first thing they confiscated. They also took seven small black flags, copies of The Nation and In These Times magazines, as well as a banner emblazoned, "Kiss Capitalism Goodbye."

These items are now evidence in the so-called J20 case. The first mass trial began this week.

Most defendants were arrested Jan. 20, when a protest (which the government has deemed a "riot") resulted in several broken windows. Officers threw more than 70 "non-lethal" grenades, sprayed dozens of canisters of pepper spray and cordoned off around 200 people in a "kettle," flanked by riot police and walls on all sides.

And though the Department of Justice claims that Petrohilos conspired to plan the riot, he wasn't arrested that day. In fact, he says he wasn't even there.

But, the fact that the government claims he discussed the J20 protest on a podcast—and was recorded at a planning meeting by undercover police and the far-right sting video site Project Veritas—has put Petrohilos at the center of what could be the most important political-conspiracy trial of a generation; one that could change the way we think about our data and other records of our actions.

Almost any statement made by Petrohilos about the day's protest was at play in what was to be the final hearing before the trials. The Nov. 9 hearing was intended to establish the fact of the conspiracy—a move that would make co-conspirators' statements admissible in court, despite hearsay rules.

Prosecutor Jennifer Kerkhoff cited statements made on the "It's Going Down" podcast as evidence of conspiracy. At one point, District of Columbia Superior Court Judge Lynn Leibovitz surmised that appearing on a podcast required planning. Thus, if Petrohilos was planning to talk about the protests, perhaps the existence of the podcast was evidence of conspiring, the judge theorized.

Paul Hernandez, a member of the It's Going Down editorial collective says the call is suspect as best.

"Saying that coming on a podcast recorded for public consumption to talk about a public demonstration is evidence of conspiracy, is like saying that someone writing a column in High Times is proof that they are in a drug cartel," Hernandez writes in an email. "The State is trying to make the case that anyone that attends a demonstration or protest is thus involved in a conspiracy."

All the prosecution needed to establish was a conspiracy to commit any crime, including "conspiracy to disrupt public congress." This could apply to any protest at any time.

"This is a fundamental attack on the right to organize," Petrohilos says.

Petrohilos is not among those who stood trial this week. The prosecution classed all of the defendants into four categories based on their alleged involvement in planning or participating in the riot. He is in Category 2, which Kerkhoff has referred to in court as "planners."

"Dylan Petrohilos said, 'Come with me if you want to talk about black bloc. I am black bloc,'" Kerkhoff said in court, citing the infiltrated planning meeting.

"Black bloc" is the essence of a large part of the J20 case. It is a political strategy in which wearing identical clothing and face masks allows a group to move collectively through the city in protest, mimicking the black flag of anarchism and making it harder for police to identify individuals, which is why the government is using clothing as evidence of conspiracy.

Isaac Dalto, Petrohilos' friend who is also included in Category 2, says the government is using his affiliation with Industrial Workers of the World union, for whom he organizes, as evidence of conspiracy.

"Because they went to legitimate, above-ground union meetings about forming a union in their workplace, their Google calendars say IWW, and that's being used against them to prove membership in this criminal conspiracy that we're alleged to be part of," Dalto says.

"Conspiring to commit lawful acts is not a crime. It's not a conspiracy. It's called organizing," he adds. "That's the real danger of this case to democracy and dissent in this country—that any form of organizing or civil resistance stands to become a crime."

The threshold for conspiracy is so low that two journalists, Aaron Cantu and Alexei Wood, are still facing charges after being arrested while covering the protest. Wood is part of the group who demanded a speedy trial and so goes to court this week.

Sporting long hair, all-black attire and a leather wide-brimmed hat, Wood might have looked a bit like an outlaw at the hearing, but he was arrested and charged with conspiring because he was livestreaming the protest.

"The chilling effect is obvious," he says. "It took me months to go document another protest. Even the most, like, 'Grannies Against Trump' thing, I didn't want to go to. I was traumatized. Absolutely traumatized."

Come May Day, he says, he reached a breaking point.

"I was like, 'Fuck it, this is what I do. This is my beat. This is what I've done for years,'" Wood says. "I didn't do anything wrong. I live-streamed myself from beginning to end, and the entire world can decide whether I incited a riot ... it's out there for the whole world to decide, and I'm glad it is."

Baynard Woods is the founder of Democracy in Crisis and a reporter and editor at The Real News.