Contagion, Don't Be Afraid of the Dark 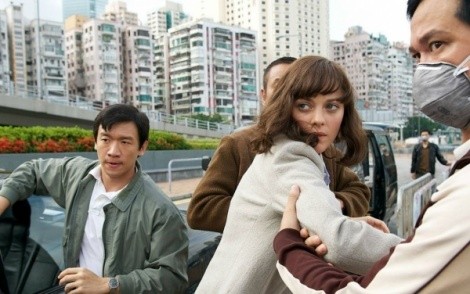 Contagion
A deadly worldwide virus may kill, but is not limited to, these stars: Gwyneth Paltrow, Matt Damon, Kate Winslet, Jude Law, Bryan Cranston, Demtri Martin and many, many more. If only New Year’s Eve had a virus. (Warner Bros.)

I Don’t Know How She Does It
A woman (Sarah Jessica Parker) attempts to balance a career, a husband, kids and a boss (Pierce Brosnan) we’re supposed to believe actually wants to tap “that.” Upside: Also starring Christina Hendricks and Olivia Munn. (The Weinstein Co.)

Red: Werewolf Hunter
When a human/werewolf peace pact is broken by a group of rogue ‘wolves, it’s up to Red (Felicia Day) and her band of militaristic hunters to stop a full-blown Lycan takeover. It’s almost as funny as Day’s The Guild. Almost. (Sony)