Chilling realism and an A-list crew 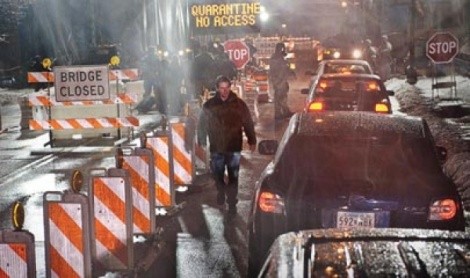 Comfort food of a very peculiar sort, the all-star disaster-movie cycle of the 1970s derived no small amount of guiltless fun from an ironclad formula: large-scale bloodless apocalypse at the end of the first reel, followed by a series of over-the-hill, easily recognizable actors biting it in increasingly baroque fashion. My personal favorite: Henry Fonda shooting himself up with giant killer-bee venom—in the name of science!—in The Swarm. Majestic Tonka-quality effects aside, what registers most strongly about these movies today is the heavy dose of pre-reality-show schadenfreude: No matter how bad your life may be, viewer, know that Robert Wagner and Charo have it worse.

Times have changed, of course, with widespread carnage no longer on the theoretical level for most audiences, a fact that Hollywood movies seeking to ape the genre have often struggled to absorb. Case in point: 2006’s woeful Poseidon, which attempted to marry retro spectacle with mounds of realistic corpses, resulting in a mess that worked on exactly zero levels. Simple escapism ain’t what it used to be.

Contagion, Steven Soderbergh’s remarkably clinical, quietly terrifying virus thriller, pulls a polar 180-degree shift from those earlier films, utilizing its easily recognizable cast to heighten the grim reality of its scenario, rather than distance itself from it. Intelligent, measured and firmly fact-based, it plays on our fears without ever tipping over into exploitation. While the skill of the film is really something to behold, it’s a valid question as to whether general audiences will want to shell out big bucks to have their worst-case scenarios verified, if not heightened—in IMAX, no less.

The script by Scott Z. Burns (The Informant!) lays out the premise with a minimum of padding, setting up a world whose population is being swiftly decimated by a constantly mutating bat-pig virus. As a multinational assortment of scientists attempts to suss out both a cure and the disease’s origin, the narrative splits to follow a series of barely connected characters, including a grieving survivor (Matt Damon), an immunologist exploring the believed starting point in Hong Kong (Marion Cotillard), a team of government workers struggling to contain the outbreak (Laurence Fishburne, Kate Winslet, Jennifer Ehle) and a muckraking blogger (an uglied-up Jude Law) exploiting the situation for hits.

Pacing has always been one of Soderbergh’s strong suits—think The Limey’s masterful backward tracking toward future vengeance—and Contagion’s early sections depicting the spread of the infection serve as something of a master class in propulsive storytelling. Without ever showboating, the film’s sure-handed rhythms give the viewer ample opportunities to check out every inch of the frame for possible vector points, fueled by a pounding John Carpenter-ish 1980s score (between this and the trip-hoppy Tangerine Dream flair of the upcoming Drive, composer Cliff Martinez is having a banner year). While the second half throttles back on the intensity somewhat, the cerebral tone persists.

The serious-minded vibe behind the camera extends to the cast, as well. For such a smart actor, Damon excels at playing a regular schlub, while Winslet and Fishburne both quietly key into the panic lurking just beneath their federally mandated protocols. The film could have used more Bryan Cranston as the military man in charge of quarantine, but what movie couldn’t? Best-in-show honors, however, go to Ehle, a fairly unknown actress (best known for playing Elizabeth Bennet opposite Colin Firth in the seminal 1995 Pride & Prejudice miniseries) who underplays beautifully as a research scientist whose eggheadedness masks a deep humanism. If the film has a hero, she’s it.

Contagion’s insistence on playing things straight, however admirable, may very well have an off-putting effect for viewers; at a preview screening, nervous titters abounded for the first third of the film, until the severity of the situation sunk in. Soderbergh and company’s anti-sensational storytelling never lets up for a second, from the first frames through the freakily simple coda that shows the disturbing ease with which fictional scenarios like these could become fact. Rather than the joyful catharsis of tap dancing on the end of the world that figures into most disaster movies, the tag line from the director’s earlier Traffic very much applies here: No one (including the audience) gets away clean. You may want to Purell those Raisinettes.