From cruciferous veggies to pork chops in 1,392 pages.

Anybody remember Mollie Katzen’s Moosewood Cookbook? As a teenager in the 1970s, I read Watership Down and the Foxfire books, practiced Transcendental Meditation, wore bellbottoms, grew ferns and ate a lot of grains, legumes and veggies—the latter mostly prepared using Moosewood Cookbook recipes. I also marched on Earth Day and was the local chapter head of an organization called Science for the People. Our goal was to save the planet and—perhaps just a lucky by-product—also have clear, peachy skin tone and pristine colons. Well, judging from this year’s spate of “conscious eating” books, the more things change, the more they remain the same. Except today, my needs are more likely to involve Firefox (the browser) than Foxfire.

Like Michael Pollan’s books—In Defense of Food and The Omnivore’s Dilemma—before them, three newer books tackle the topic of, and attempt to make the case for, eating righteously. In a nutshell, that comes down to eating healthy, wholesome food that also doesn’t kill the planet. Sounds simple enough, right? Well, not so fast. It took three authors—Mark Bittman, Terry Walters and Nicolette Hahn Niman—three books and a lot of trees to tell us, essentially, “Hey! Stop eating garbage!” 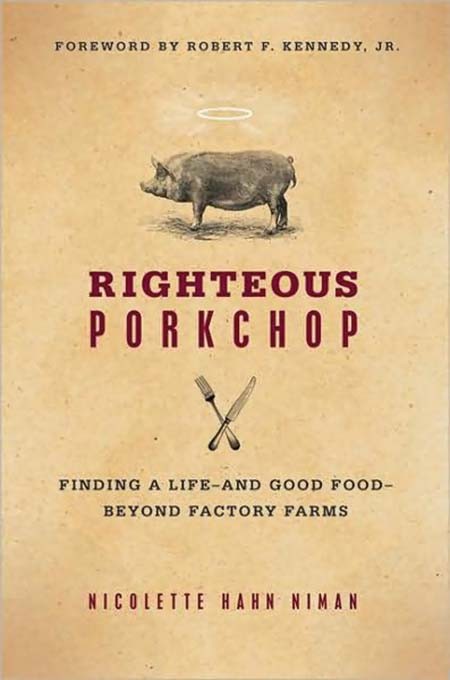 rse, our culture runs on garbage: trash TV, trash magazines, trash movies. And, fueling all the rest is trash food. And so, it takes a book like Righteous Porkchop: Finding a Life and Good Food Beyond Factory Farms, by Nicolette Hahn Niman, to instruct us that the “Certified Angus Beef” rib eye at the neighborhood supermarket isn’t really all that great for you or the planet, and really isn’t good for the cow who produced it. Not that Hahn Niman wants to make you a vegetarian.

In case the name Niman sounds familiar, this is Niman, as in Niman Ranch—a network of 650 farmers and ranchers producing natural hogs, beef and lamb. The author of Righteous Porkchop is married to the founder of Niman Ranch. But before that, she was an environmental attorney fighting the good fight and working for Robert F. Kennedy Jr. who wrote the introduction to Righteous Porkchop.

Nicolette Hahn Niman isn’t the first writer to warn us that the mega-industrial farms and ranches create massive environmental and health problems, but she’s one of the best. I actually found Righteous Porkchop a riveting read, even though I pretty much knew the ending: “Do not thoughtlessly eat foods from animals. Know the source. Question the methods.” Oh, and expect to pay a bit more for a Niman Ranch pork chop than you will for the mass-produced chop. I suppose one of the things I like most about Righteous Porkchop is that it makes the case for sustainable ranching, farming and eating based on actual facts. Hahn Niman is, first and foremost, a lawyer, and she makes the case for an overhaul of the way we produce and consume food in this country that is iron-

On the other hand, Terry Walters’ Clean Food: A Seasonal Guide to Eating Close to the Source, reminds me of the 1970s that I referred to before. Given the blurb by Alice Waters— “Terry Walters is fighting the good fight! Clean Food is a must-have for any advocate of good, clean, and fair.”—I had high hopes for Clean Food. But, frankly, I found this book annoying: too much belly-button-gazing and too few hard facts.

Walters, who runs a mini-industry based on “inspiring, healing and empowering” (look out, suckers!), in Clean Food threads together a hippy-dippy cosmology—“Eat … all the colors of the rainbow …”—with a gaggle of recipes that, essentially, are vegan. Some of them are pretty good. And there is some useful, if obvious, advice, such as “chew, chew, chew!” your food, and stop eati

ng three hours before bedtime. Other instructions, such as “make peace with your food and your choices,” just creep me out. Wanna save yourself $30? Here’s what Clean Food comes down to: Eat unprocessed, organic food, preferably cruciferous vegetables.

It’s ironic that Alice Waters wrote that cover blurb for Clean Food since Waters, herself, made a much stronger (not to mention, tastier) case for revolutionizing the way we eat in her own The Art of Simple Food. But, with Waters, we get to indulge in food that would probably gag Terry Walters … like chicken, albeit natural chicken. I, too, want to eat healthy, eat sustainably and eat close to the source. But, I also want a piece of fish or chocolate cake now and then. With Waters, not Walters, I can have my cake and save the planet, too.

the core of Mark Bittman’s book Food Matters: A Guide to Conscious Eating is this question: “Could improved health for people and planet be as simple as eating fewer animals, less junk food and super-refined carbohydrates?” I think you already know the answer.

As for personal health goals, Bittman himself has trimmed down considerably since discovering legumes, whole grains and veggies. His manifesto for saving ourselves (while also saving our planet) is based simply on what he calls “sane eating.” That pretty much boils down to moving away from the typical American diet— loaded with animal fats, refined sugar and empty calories—toward the traditional cuisines of the Mediterranean, Middle East, India, France, Asia and North Africa.

Not exactly cutting-edge stuff, but it’s a hell of a lot more appealing than Slim-Fast. And, Bittman makes sane eating sensuous, with 75 flavorful recipes such as his paella, which includes chorizo and shrimp, or a delicious roasted chicken and chickpea stew. Just because food matters, doesn’t mean it has to be dreary.