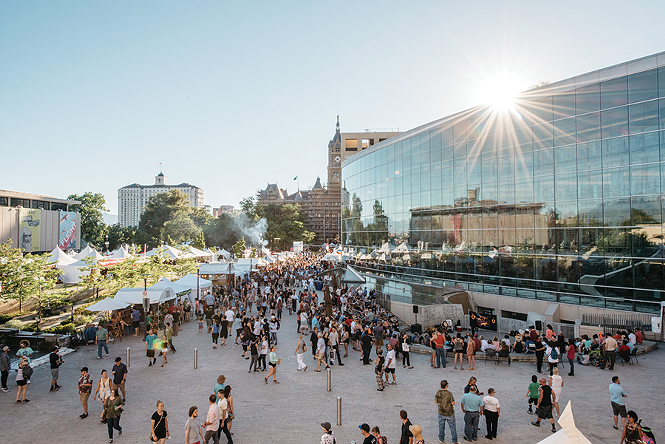 For more than 40 years, the Utah Arts Festival has hosted thousands of local residents, and long-tenured leaders like executive director Lisa Sewell, volunteer coordinator Kaye Wankier and artist marketplace co-coordinator Matt Jacobson provide tremendous stability. But every once in a while, staffing turnover allows for an injection of fresh perspective into the festival. Here's a look at three new area coordinators for the 2019 Utah Arts Festival, including the road that brought them to the festival and their ideas for shaking things up a bit.

It's something of a misnomer to suggest that Dayna McKee is new to the Utah Arts Festival, since she has spent most of the last 15 years running the sponsor and hospitality area on the festival grounds. But for 2019, McKee made the transition to overseeing the performing arts program, including the live music performances.

"I'm sort of obsessed with live music," says McKee, who also serves as a member of the Sugar House community council. "Every year, I'd take an hour off the patio [at the festival] to see someone. They just knew I've always been enthusiastic about live music. I got real lucky that they'd take me on to kind of my dream job."

McKee stepped into a role where there's already a foundation of other people involved, including community members who serve as jury members in a variety of specific musical genres to help decide the lineup. While she did look to bring in some new jurors to provide a fresh perspective, she says, "with limited time, and never having done the process before, I didn't want to start from scratch. I did what I could in terms of including those who wanted to be included."

She was able, however, to launch one new initiative that became a huge part of the festival's Friday programming. McKee suggested a theme of "Women Who Rock"—inspired by the KRCL 90.9 FM radio program—for all the music performing artists on Friday. She was then thrilled to find that many of the other area coordinators were interested in taking that concept and applying it to their own programming, including literary arts and the Fear No Film Festival.

McKee acknowledges that there has been a learning curve in moving from an area where the primary focus was on-site logistics to one that required months of preparation. But for her, the focus is on the experience of the artists and the attendees. "I hope people come and have fun," she says. "That's my No. 1 goal."

Trish Hopkinson is no rookie in the Utah literary scene, having co-founded Rock Canyon Poets in 2015 and performed her work at the Utah Arts Festival multiple times. But she wasn't necessarily looking for a role in the festival when Sewell reached out to her to take over the literary program. "I was really excited," Hopkinson says, "not just to be asked, but to take it on, because I'm fairly involved and connected in the literary arts community, but I know there are some corners I haven't touched or been connected to. So I was excited to extend my own literary community beyond poetry. It was a good reason to push me to make other connections."

Considering how much of the festival's literary program has focused on poetry in the past, Hopkinson seems like a natural fit, yet she was also determined to take that goal of expanding her own area of expertise and applying it to the festival programming. "In the past, there's been a larger focus on performance poetry," she says. "It was important to me to expand that further, not just to different genres of literary arts, but to all the different communities of writers we have in Utah: cowboy poetry, more fiction and non-fiction writers, reaching out to the Latinx community, disabled community, storytelling."

For Hopkinson, new programming ideas—including adding a high-school poetry slam and a poetry component to the Kids' Art Yard—has a pragmatic side beyond the philosophical goal of greater representation. "The more of the diverse communities we have in Utah that are represented," she says, "the more interest we're likely to have from different groups of attendees."

As part of the Utah Film Commission, and a film technician himself, Derek Mellus brings plenty of background knowledge to overseeing the Utah Arts Festival's resident short film festival. Still, he had plenty on his plate when previous Fear No Film coordinator Topher Horman approached him about the possibility of taking over. "I looked at it as an opportunity to have a creative outlet," Mellus says. "As an artist, I always work best with a deadline."

It was a surprise to Mellus, then, when the opening of the submission process for Fear No Film didn't result in the deluge of films he was expecting. "At first, I didn't feel like I was going to have the numbers to have 60 films in the program," he says. "But one of the things I did was proactively reach out to some filmmakers I knew, and whose work I'd seen, and asked them to submit. And some of the best of the Sundance Film Festival, I couldn't not have some of them."

In terms of programming the accepted films, Mellus did choose to take a different approach from Horman's. He introduced a "midnight movies" program of genre films. Also, where in previous years a shorts program might include a variety of narrative, documentary, animation or even music videos, Mellus says, "I went more traditionalist in that respect and grouped them by type. As an audience member, if I want to go watch documentaries, I want to go watch documentaries."

The resulting program includes 28 first-time filmmakers and 42% of the films are directed by women—all important numbers Mellus says, for someone in the role of gatekeeper helping showcase these works. The effort, for him, has been worth it—even if, like some of his newcomer colleagues, there have been time challenges along the way. "Once you set up your acceptance emails to the filmmakers, I thought I'd have this thing all tied up with a bow months ago," he says. "I probably underestimated the amount of time it would take up. It's definitely a labor of love."

It's also labor that art-lovers throughout the state enjoy the benefits of.