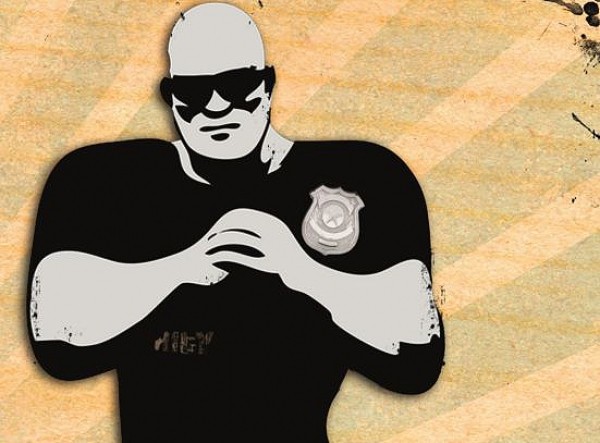 A few men walk into a bar and get into a fight. The fight spills out the bar until the police show up.

What’s the punch line? One of the men in the fight, Jason Nicholes, is a captain with the Utah Department of Corrections who moonlights as a bouncer. When a responding Salt Lake City Police officer criticized Nicholes for interfering with a police investigation by telling those involved in the fight to leave, Nicholes tried to start a fight with him.

The drama unfolded in September 2011, when a SLCPD K-9 officer responded to a brawl outside a downtown Salt Lake City nightclub. The barpatron brawl evolved into a near fight between UDC Captain Jason Nicholes and Salt Lake City Police Department Officer Cale Lennberg, after Lennberg called Nicholes a “jackwagon” for telling fight participants and witnesses to leave.

The Salt Lake City Police Department decided to handle the matter internally, rather than filing charges or issuing citations. City Weekly obtained documents from Corrections regarding the result of that discipline investigation only after the department denied the request for more than two months. The documents indicate that Nicholes was suspended for 48 working hours without pay—a little over a week—as a result of his “unprofessional” behavior.

While emotions can run high in a bar brawl, advocates still say the incident is emblematic of the kind of disparities that exist for those who enforce laws and those who have laws enforced upon them.

For interfering with a police investigation and trying to start a fight with a police officer, Nicholes’ treatment was very different than what the average citizen would experience, says Kent Hart, director of the Utah Association of Criminal Defense Lawyers. “If this were a member of the public, they would have been charged with multiple felonies,” Hart says. He says that by deciding from the very beginning to handle the issue through department discipline immediately showed preferential treatment to the UDC employee.

According to a Sept. 17, 2011, police report, Officer Lennberg caught sight of a brawl outside the Hotel Bar & Nightclub involving as many as eight individuals. One of the first individuals Lennberg approached was Nicholes, who at the time had one individual in a chokehold from behind. As the two men wrestled to the ground, Lennberg spotted a badge hanging around Nicholes’ neck. The officer spotted another “four to five other males, some covered in blood” who were part of the brawl and asked them to remain at the scene.

“While I was attempting to collect these individuals, Nicholes was yelling for everyone to ‘go home’ and to ‘get out of there,’ ” Lennberg states in the report. In the ensuing chaos, multiple individuals the officer believed to be involved in the fight were able to slip away from the scene.

In the report, Lennberg expressed surprise to discover Nicholes was a peace officer, since his badge was obscured, and he was not dressed like club security, simply wearing a T-shirt, jeans and a jacket. The report indicated Taija Marcus was “knocked to the ground” by Nicholes, according to a witness, but neither Marcus nor the individual who was being choked by Nicholes had any idea Nicholes was law enforcement.

The report noted that Nicholes defended clearing the crowd, saying he was speaking to only one person, not the entire crowd. Apparently, it was over this point that Nicholes lost his composure. When other officers responded to the scene and asked what had happened to the missing witnesses and suspects, Lennberg reports, “‘That jackwagon sent everyone away,’ referring to Nicholes. This apparently angered Nicholes and he began to call me on (wanted to fight). Nicholes pulled off his jacket and said something to the effect [of] ‘Let’s do this.’ ” According to a letter describing the incident from Nicholes’ supervisor, Steven Turley, the director of UDC’s Division of Institutional Operations, Nicholes had told Turley he’d called the SLCPD officer an “idiot” and had “postured as if [he] were going to fight the officer.”

“Your behavior toward the officer was unprofessional and will not be tolerated,” Turley wrote in the letter.

Another SLCPD officer, Jon Wallace, reported on the incident and noted that Nicholes argued he had told only one individual to leave the area because that person was continuing to agitate. Regardless, the individual Nicholes told to leave, according to Wallace’s report, was “one of the parties that had started the fight.”

Since the SLCPD decided to handle the issue administratively bet ween the Police Department and Corrections, no arrests or citations were made. During the incident, SLCPD simply talked with Nicholes about not being easily identifiable as a peace officer and for not filling out paperwork when the bar security used force in breaking up a fight. Ironically, while identification was an issue for the SLCPD, Nicholes was also reprimanded for having his UDC badge on him, a violation of its policy.

“The department would not want someone to attempt to gain legitimacy or espouse some authority using UDCissued credentials when they are filling a third-party employment role,” writes UDC spokesman Steve Gehrke via e-mail. In the report, Nicholes also said the bar’s policy required him to not dress like law enforcement or security.

While SLCPD kept the investigation open more than a month after the incident, Nicholes was never charged. On Oct. 7, 2011, Turley suspended him without pay for a little more than a week.

While the case is closed as far as UDC and SLCPD are concerned, the antics of Nicholes give Hart pause. As the director of the state nonprofit association for criminal-defense lawyers, Hart says it’s human nature that law enforcement would be able to relate with one another. Once the heat of the moment passes in such a fracas, he says, fellow peace officers would naturally be more lenient on one another— certainly more lenient than on an average citizen who interfered with an investigation, obstructed justice and threatened a police officer.

“I think we should have a higher standard for police and law enforcement,” Hart says. “They know the law, so we should expect them to be better than the average person.” While Hart acknowledges that law enforcement can be subject to incredibly challenging and stressful working conditions, those circumstances shouldn’t be excuses for breaking the rules—and potentially the law.

“They have to make difficult decisions and they do so under extreme, violent and intense situations—but we would expect them to be able to handle that because they are trained to do so,” Hart says. “They have to uphold the law, in other words.”