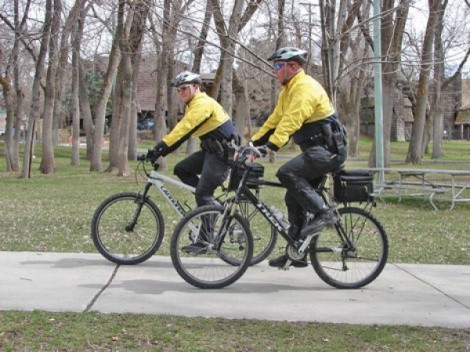 Technically speaking, it was more mischief than vandalism when it came to describing the penises that appeared on the storefront windows at downtown’s Mid City Salon in December 2010. The hair salon was participating in the city-sponsored holiday decorating competition and had flocked its windows with temporary fake-snow paint. Staff opened shop one day to find that somebody had traced penises onto the paint. It’s not exactly the kind of concern that would warrant calling the police—however, if a shop owner is in friendly contact with police, it’s something officers want to hear about. Sgt. Andrew Oblad, of the Pioneer Park Bicycle Squad, was happy to lend an ear to the salon owner as he made the rounds recently talking to businesses about their concerns.

“We also get guys that come and urinate on this corner here,” the salon owner told Oblad.

“We want you to call when that happens,” Oblad said.

This new “friendlier” model of policing gives business owners a glimmer of hope when it comes to ridding the sidewalks of vagrants. But some low-income advocates worry cops could use the friendly connections to abuse those who live on streets.

While the officers have always checked in with downtown businesses, recent changes in the department have reinforced the idea that officers need to be more neighborly. That’s why the department has created two new bike squads that are tasked solely with investigations and community policing in the downtown area. Unlike existing squads, these units will not respond to patrol division calls for service in other parts of the city but instead will just work on community policing downtown.

“It gives them a sense of community, rather than being tied to the radio,” says Lt. Mark Scharman of the Salt Lake City Police Department’s Fusion Division. “This way, [officers] can get off their bikes, get on their feet and actually go talk to people. See what the concerns are, address them and be available.”

With the Salt Lake City Council recently shelving a proposal for an ordinance against aggressive panhandling, low-income advocates have questioned whether the new resources aren’t meant as a compromise to downtown businesses that feel the city has not done enough about panhandlers.

“Is the goal to make everybody feel more safe?” asks Bill Tibbitts, director of the Anti-Hunger Advocacy Project at the Crossroads Urban Center. “Or to just make some people feel safe?” Tibbitts, like other advocates, says it’s too soon to say what the increased police presence will mean for the city’s homeless and low-income population, but he is encouraged that the department has indicated that it wants to have better contact with all downtown citizens—from business owners to street kids and panhandlers.

The new squads got their official orders as of Jan. 9, in a reorganizing of department resources that deputy chief Michael Brown says won’t impact other departmental needs. Under previous structuring, the department utilized four seven-man bike squads for the city. All of these squads, however, were “tied to their radio,” which meant they would respond to complaints and calls for service that might take them anywhere in the city—and off their assigned beat, sometimes all day. Two of those squads have now given two of their full-time officers to the patrol division, leaving two five-man squads tasked solely with working three general downtown areas: Main Street, The Gateway and Pioneer Park area and the Salt Lake City Main Library. The two other bike squads police the entire city, and are also relieved from responding to calls for service. The bike squad restructuring can now help to provide a full week of downtown policing where previous shifts only worked those beats weekend evenings and some day shifts during the week.

“We expect them to stop by all businesses,” Brown says. If officers keep in regular contact with businesses and downtown citizens, they will know an officer personally they can reach out to instead of calling dispatch, Brown says.

“We want to shorten that response by intercepting that call to the police department,” Brown says. The new bike squads hope to improve efficiency by also being under the purview of the department’s Fusion Division—which integrates resources from different divisions and federal counterparts under the same roof. That way, the new downtown bike cops will have direct access to narcotics agents, vice and other departmental resources if they need it.

Keeping things neighborly ideally also allows the department to address problems before they get unmanageable. In October 2010, the department conducted a week-long blitz on Main Street between 200 South and 300 South, where officers cited violations that ranged from littering and drug dealing to smoking and skateboarding on the sidewalk. The sweep resulted in 10 felony arrests and 130 misdemeanor arrests, but the operation might not have been needed at all had the area received more attention to begin with.

“We should have been able to take care of this [sooner],” Lt. Mike Ross says.

Ross, whose command includes narcotics and vice, as well as the two new bike squads, says the genesis of the new squads had more to do with the drug activity on that area of Main Street, than with any other issue, including panhandling.

Juggalos and street kids, more than panhandlers with cardboard signs, are often considered greater nuisances by downtown shops and restaurants.

Chloe Noble, a founder of Operation Shine America, a resource and advocacy group for homeless youth, will be the first to admit homeless youth in Salt Lake City have faced more harassment from authorities than other homeless individuals—but she’s also excited about the new bike squads.

Noble, along with other low-income advocates, recently met with Salt Lake City Police Chief Chris Burbank to talk about the community-policing emphasis downtown.

“What Chief Burbank is doing is having a presence where [police] can actually get to know the youth,” Noble says. “It helps both sides come to creative solutions faster,” Noble says, adding that if officers truly reach out to the youth, they’ll be invested in helping them out by referring them to drug treatment or other services. “Then, it won’t be just as cut and dry as you’re standing in the sidewalk, here’s a ticket. ”

Lt. Ross is hopeful the new squads can help out all downtown residents.

“I think a society is judged by how it treats its lesser [members], I really believe that,” Ross says, speaking of the new squads’ mission. “And I think this is going to bring us closer to them now.”