Activists, relatives of shooting victims and the SLCPD seek a blueprint for law enforcement reform. 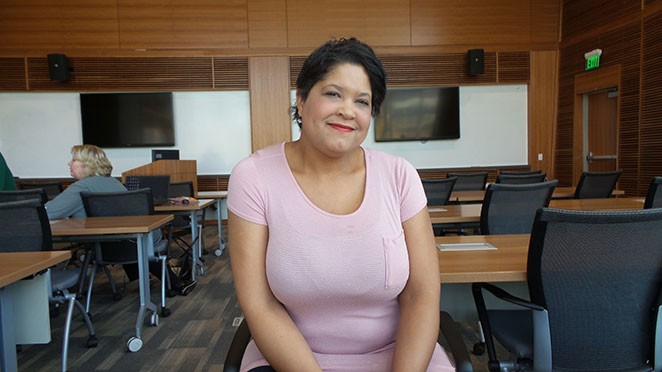 In the glass and steel fortress that is Salt Lake City's downtown Public Safety Building, an experiment in interaction between two typically opposing forces is unfolding.

On the law enforcement front, it can range from Chief Mike Brown, who first suggested sit-downs after the shooting of a 17-year-old outside the Rio Grande shelter in late February 2016, to rank and file officers. Each meeting, a different part of the department educates people from groups such as Black Lives Matter, CopWatch and Utah Against Police Brutality, about what they do and answers questions.

SLCPD spokesman Detective Greg Wilking says Community Activist Group (CAG) meetings have broken down numerous barriers. "You generally think of activists as sitting on the outside, on the fringe," he says. "We're inviting them to have a place at the table and be heard."

Along with city officials and community leaders, on the activist front it's a mix of people critical of the police's use of force—and policing in general—and the relatives of those shot by cops. On the table are numerous contentious issues underpinning use of force and modern policing.

Lex Scott is a vocal leader of Black Lives Matter in Utah and the founder of civil-rights group United Front. What she and other activists are doing through CAG, she says, "is groundbreaking." Scott, American Civil Liberties Union of Utah's strategic communications manager Anna Brower and former city councilwoman Deeda Seed are among those who have hosted CAG meetings.

Scott praises Brown. "It's hard to be one of the leaders of Black Lives Matter and say, 'I like the police chief,' but then it's rare to see the police chief come out and actually try to reform the department. He risks so much doing this and he doesn't have to." In other parts of the country, she says, people argue over if there even is a police brutality problem. "We're beyond that. We're just going to solve the problem," she says.

Jacob Jensen, however, isn't as convinced about what CAG can deliver. He's part of Utah Against Police Brutality and has attended three CAG meetings. "It seems like the activation or use of this is completely up to Chief Brown," he says. "He could dissolve it at any point."

Jensen doesn't see CAG leading to the empowerment of the community to hold the police accountable. "It's just him politely listening," he says.

Among the reforms CAG seeks, according to Scott, is body-camera footage released within 24 hours of a shooting. "We want officers punished if they don't turn [their camera] on and we want more de-escalation training," she says. "They only get a few hours in a 30-year period of time." The group also wants to see more diversity training and recruitment, and a community-controlled civilian review board with the power to bring charges against police officers, as opposed to the current Salt Lake City Police Civilian Review Board, which, according to the city's website, "has no independent disciplinary power."

Jensen and Scott point to several U.S. cities that have set up community-controlled review boards with significant oversight. In May 2015, Newark, N.J., Mayor Ras J. Baraka signed off on a board that could pursue independent investigations and have the power to summon officers to formal hearings and seek punishment by Newark's police director.

Wilking doubts whether such a transfer of power could happen. "How realistic that is remains to be seen," he says. Salt Lake City Community Relations director Jennifer Seelig describes the city's current civilian review board as "an interesting animal." She says that Utah state code relating to the role and responsibility of the police chief, civilian commissions and the rights of public employees means that "trying to navigate the matrix of state law doesn't allow us a lot of breadth." While there are also barriers relating to city policy as well, Seelig doesn't completely rule out change. "You never know," she says.

During a mid-October CAG meeting it's clear there are both remarkably candid conversations going on between activists and the police, and also tensions and frustrations bubbling on both sides.

For that meeting, Chief Brown's promised presence does not materialize, and plans to discuss concerns about minors being arrested at high schools are postponed. Instead the activists view a revamped SLCPD website, which is to include a button for complaints about officers.

Close to half of those attending have lost loved ones in police shootings. "What we'd like to do is change the law and the description of what is excessive force because it's so vague," says Jana Tucker, whose son Joey was shot dead in 2009. "Right now, the way it's written, all an officer has to say is, 'I feel threatened,' for his or somebody else's safety," she says, for the shooting to be ruled justified by the District Attorney.

One issue attendees brought up, including Scott, was racial profiling during traffic stops. "What we're trying to look at, and see, is, are black people pulled over at five times the rate of white people? And if there are certain officers doing that," Scott asked.

Sgt. Brandon Shear at the meeting said that he would "get with" their records department to see "how easy it is to extrapolate that information."

Gina Thayne, aunt of 7-Eleven shooting victim Dillon Taylor, said at the meeting she'd like to see more resources for people affected by a shooting. "When a family is hit with a traumatic issue, they don't know where to go."

"Would it be helpful to have resources on the website?" Shear asked. Tucker said the last thing she would have thought of was to go there. "I was worried about when I would get the body back, where I would get a burial plot," she said.

After the meeting, Wilking says collecting and publishing data on law enforcement websites is a White House initiative, but Jensen questions whether SLCPD will grant CAG access to all the data it seeks.

Jensen thinks there are "small things to be won by CAG. I think Brown for all his efforts, even though he's not giving us exactly what we want at CAG, I think he's trying. He's just not going to give the reins over to the community as to who gets to be called a murderer and who gets fired."

Both Wilking and Scott, however, see the CAG meetings as offering a direction for community interaction with law enforcement that other states could benefit from. Scott says she's been contacted by NYPD seeking information. She just hopes word spreads and more people attend. Much like the other regular attendees at CAG, "I'm just trying to change the world over here," she says.