Finding music in unusual places while fighting off the 'rona. 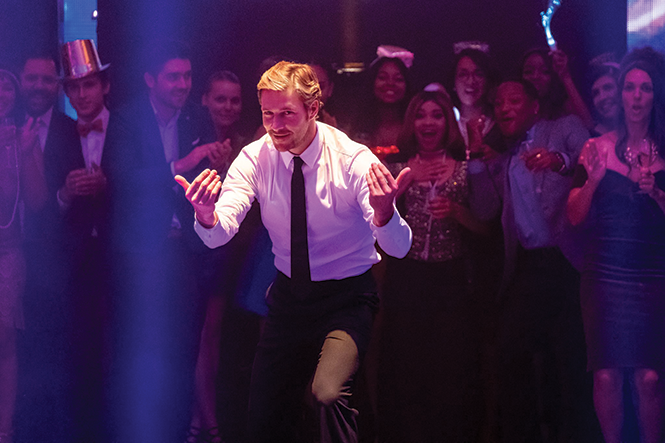 Just like so many other people in Utah nowadays, your music editor has the 'rona. It's been blessedly easy so far, with no loss of taste or smell, but a definite loss of normal habits, like listening to music in my typical fashion. Below is a log of how I've dealt with the uncanny experience of harboring the killer virus while restlessly bobbing around my apartment. Feel more than free to borrow my coping mechanisms.

With Television – If your COVID is mild like mine has been, it's just like having a wicked cold, in that silence buzzes in harmony with your exhaustion, and turning on some television is easier than selecting a record to listen to when it comes to filling the sound void. Just after viewing my positive test result, already on day five of persistently coughing, I was suckered in by one of Netflix's new shitty holiday movies, Holidate. Holiday movies like this one have a particularly soothing quality, the familiar aesthetic and music recalling the simplicity of childhood. Holidate's best musical moment though—which made me look up from my miserable phone scrolling—comes by way of an unabashed copycat moment ripped from Dirty Dancing—the iconic flying lift scene, soundtracked by the sensual classic "(I've Had) The Time Of My Life." The frequency with which that moment is referenced in pop culture—2011's Crazy, Stupid, Love does it too—might cheapen the song, but it's still an enduringly good one to be reminded of, even when you have COVID and you are not having the time of your life. It also calls to mind the song "Nobody Puts Baby In The Corner," by early aughts emo act Fall Out Boy, off the first CD I ever owned, at age 10, From Under the Cork Tree—and my first actual encounter with that iconic Dirty Dancing line.

With Chores – Quarantining with a boyfriend who has lesser symptoms than you, more capacity to do dishes, and the awareness to point out how much TV you're both consuming is quite good for a household in lockdown. When it came time to peel myself off the couch to fold laundry, I turned towards hyperpop to wake me up—specifically, Charlie XCX's pandemic-produced how i'm feeling now, an album my boyfriend and I were reminiscing about listening to back in the early pandemic days. As it turns out, listening to hyperpop while COVID tries its damndest to weigh down your ability to move and function is bizarre. After finally hanging up all the blouses and folding all the pants that had lain for days on my floor, I laid myself out where the pile had been, totally spent. Meanwhile, the trippy track "c2.0" bounced around me, as I considered the possibility of my Corona case taking a turn for the worse, and what it would be like to lay in a hospital dying—but in my COVID-adled brain, it was a vision soundtracked by Charli, which made it funny. Morbid? I have COVID still as I write this, so I maintain the right to relay my stupid, virus-infected fantasies.

With Spotify's Dread Autoplay Feature – With no live shows for enjoying either new or already-adored music, streaming has become my most reliable source of music-eating. And my preferred streaming has shifted too, from Spotify and its odious, never-changing algorithms and repetitive autoplay feature, to the more manual operation that is Bandcamp, which requires more intentional music discovery. However, it's hard to be intentional when COVID has a grip on your brain, so a return to Spotify meant letting autoplay take over. While lounging zombie-like on opposite ends of my big black couch, my boyfriend and I let a Rilo Kiley album end and give way to a Spotify-generated, early aughts-filled queue of songs. In the spirit of passive discovery, I let Bright Eyes songs warble over us, even though I hate Conor Oberst-anything, and we both took guesses at which songs were Jenny Lewis and which Niko Case. It was like bingeing the years 2000 to 2005.

With Radio – When even streaming becomes too much of a choice-burden, community radio has your back. As I wrote this, I chose to slip into the lull of another person's decisions, switching between the tropicalia, jazz, funk and soul inclinations of KUAA (kuaafm.org) and KRCL's Midday and Afternoon shows (krcl.org). The latter programs are often an incongruous mix of genres, delivering surprises that are also blissfully out of my hands and in those of the DJs, with their soothingly familiar voices. Nick Cave & The Bad Seeds ceded to back-to-back tracks by The Verve, reminding me of when my Peruvian ex-boyfriend said that the band gained a tardy popularity there when he was a teen. For its part, KUAA's programming makes me wistful for the DJ pals I knew while working part-time at a party bar last year. Gen X dudes with deep knowledge of the kinds of obscure World music KUAA often favors, their selections on slow nights were always groovy, their conversation always educational. I long for the day I can sip a cocktail in a bar, one of those DJs spinning vinyl from a corner—but in the meantime, KRCL's spinning Big Star, and I'm about to sip some soup instead.