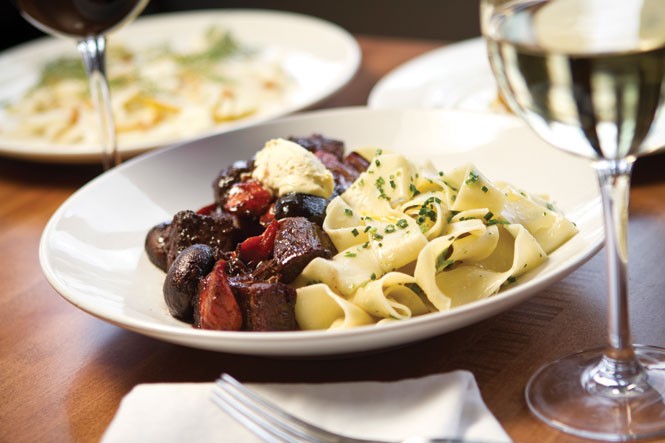 When Ryan and Colleen Lowder moved back to Utah after a lengthy stint in New York City, they couldn't have possibly imagined what their lives would look like a half-decade down the road. In a word: busy.

That's because, in the past five years, they've been painting the town Copper. Their flagship bistro—The Copper Onion, where Ryan is executive chef—has been successful pretty much from Day 1. I recall writing shortly after its opening that "restaurants like the Copper Onion remind me how much I love my job." The eatery celebrated its fifth birthday just last month. My, how time flies.

Then, in spring 2014, Lowder opened Copper Commons, an excellent addition to the downtown bar & bites scene. But he wasn't done yet. Lowder had his sights set on Holladay—specifically, the shiny new Holladay Village complex, which is also home to a new Caputo's Deli, Taqueria 27, Tonyburgers, 3 Cups and other independent businesses. The newest jewel in the Copper empire is called Copper Kitchen, described simply as "an American restaurant."

With Copper Kitchen's large, airy, open space and high, copper-colored ceilings, I think of it more as an American brasserie, featuring a large service island in the center of the dining room, an open kitchen and bar/counter seating in the rear. Thanks to talented designer Rachel Hodson, the décor of Copper Kitchen, while immensely appealing, is also a lesson in restraint. It's not a theme park, but rather a place where the food is front and center: It's not all about the décor. Having said that, the vibe is typically bustling, with frequent table-hopping among customers.

Frankly, I'd expected Copper Kitchen to be Copper Onion 2.0, but I should have known that an ambitious guy like Ryan Lowder wouldn't take the easy way out. The Copper Kitchen menu isn't a photocopy of its predecessor's. In fact, there's very little overlap in the two restaurants' menus. However, Lowder's culinary sensibilities and his dedication to flavor above all else—not cuteness or food fads—shines through in every Copper Kitchen dish.

They are primarily executed by sous chef Justin Nelson, who has a few tricks up his own sleeve. Lowder encourages his cooks to experiment and create, which is one reason why Copper Commons and Copper Kitchen aren't cookie-cutter replicas of Copper Onion. A duo of duck croquettes ($7) as a starter is simple but exceptional: duck confit and pulverized cremini mushrooms are breaded, deep-fried and served with a splendid orange aioli for dipping. It's finger food at its finest. Even better is grilled porkbelly ($13). I know I'm on the record as being so over porkbelly; I see it on far too many restaurant menus—and, far too often, it's not given the respect (nor technique) it deserves. But Nelson presses and grills it, serving crispy porkbelly sticks on a bed of frisee with carrot-ginger vinaigrette and apple-cider reduction, sprinkled with pomegranate seeds. It's a dish that rekindled my lost love-affair with porkbelly.

Copper Kitchen's pear salad ($10) is an example of the sort of dish that has made all of the Copper eateries so popular. On paper, it might look a little "meh." But, when a handful of excellent fresh ingredients are judiciously combined—Asian pear, fresh fennel, celery, Gorgonzola and pine nuts, in this case—what happens is a party in your mouth. In fact, the only appetizer I tasted that wasn't a total bullseye was the chicken brodo soup ($8), and that's only because, although the chicken broth was heavenly, I don't care for ricotta in sage dumplings. What can I say? I'm a dumpling purist.

Speaking of chicken, you'll want to try Copper Kitchen's chicken entree ($24). It's a grilled Mary's airline chicken breast atop a battered & fried Mary's boneless thigh (even though it mistakenly says "leg" on the menu)—which, in turn, is stacked on fingerling potatoes and cubed squash, all sauced with a light, tangy mustard vinaigrette. Mustard shows up again in my favorite Copper Onion item: beef bourguignon ($21). It's comfort food at its best: fork-tender chunks of braised-beef short rib and crispy porkbelly batons mingle with mushroom buttons, glazed shallots and garlic, all in a rich, silky jus on a bed of first-rate homemade pappardelle pasta noodles, sprinkled with parsley. The perfect topper is a dollop of creamy mustard with a mayo-like texture.

Earlier in the month, Copper Kitchen began lunch service with menu items like tuna Niçoise, Philly cheesesteak, fried-egg sandwich and pasta dishes. And, I'd be remiss if I didn't spill some ink on the outstanding weekend brunch. If you never order any other Copper Kitchen dish, be sure to try Mike Richey's Famous Chicken Hash ($10). It's named for ex-Pago Chef Mike Richey, whose chicken-hash recipe is re-created (with his consent), and it's absolutely killer. The "hash" looks more like a crab cake or croquette: lightly breaded and sauteed minced chicken with vodka-mascarpone cheese bechamel (I know, right?), cherry tomato and a light, perfectly scrambled egg on top, garnished with chive. It's a died-and-gone-to-heaven experience.

There's also an inventive take on poutine, called divorciados. It's a reference to the Mexican breakfast of two fried eggs, separated (divorced) by a chilaquiles barrier. At Copper Kitchen, it's poutine with shredded pork and frites, topped with gravy and a fried egg, and sauced on one side with salsa verde and on the other with salsa roja. Simply put, this food is bitchin'.

It looks like the Lowders have another hit on their hands.