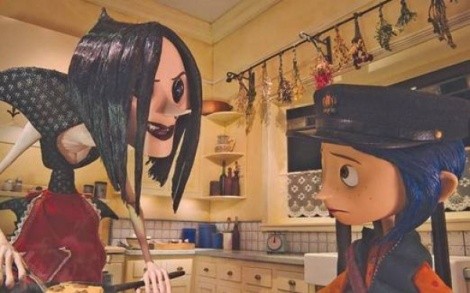 If you embrace movies as works of art, not just as works of commerce, then here’s why you should embrace Coraline: Not a frame of it looks like it was crafted with a thought to who might actually want to buy a ticket.

I mean that as a compliment, and not a backhanded one. In contemporary Hollywood, there’s only one paradigm for selling any kind of feature animation, and that’s selling it to families. But this grim fairy tale—based on an award-winning book by Neil Gaiman (Sandman)—is far more disturbing than it is charming, funny or otherwise kid-friendly. The textures of its stop-motion world make it feel even more physically threatening, especially in 3-D. It may be fair to say that this—far more so than director Henry Selick’s breakthrough feature, The Nightmare Before Christmas—is the first true horror film that will play to theaters full of grade-schoolers.

Perhaps that should scare away impressionable youngsters, but it shouldn’t scare away anyone who would revel in pure creative wonder. Gaiman’s story follows young Coraline Jones (voiced by Dakota Fanning) as she and her parents move into an old house-turned-apartment building. Mom (Teri Hatcher) and Dad (John Hodgman) are busy writing their gardening books, leaving Coraline to explore her new residence and discover a mysterious small door. A passage inside leads to an alternate world identical to her own—except that her parents are more attentive and accommodating to her every desire. And if Other Mother and Other Father happen to have buttons for eyes … well, nobody’s perfect.

It makes perfect sense that Selick—whose previous stop-motion features were inspired by the visions of Tim Burton and Roald Dahl (James and the Giant Peach), respectively— would turn next to Neil Gaiman. Gaiman has always favored exploring the darkest edges of children’s mythologies, including parental doppelgängers in stuff like his 2005 fantasy MirrorMask. At its core, this is a haunted-house story, but one informed by a host of childhood fears: moving away to a strange new place; what your dolls might be doing while you’re asleep; even the notion that your own parents’ love could be twisted into something dangerous.

Selick takes this primal material and gives it an extra push over the cliff into Nightmare Town. The character designs turn Scottish terriers into bat-winged creatures and expose the true form of Other Mother as a lanky fiend with metallic claws.

Destroyed beings in the alternate world dissolve into sand or reveal themselves to be made entirely of rats. Selick rarely makes use of the 3-D technology to send things scurrying or flying out of the screen, but he really doesn’t need to. The simple impression that they’re in the same room with these things could send some kids cowering into a fetal position.

What potential viewers will need to wrap their heads around is that, while Coraline may be about childhood, it isn’t really for children. It’s hard to imagine that a youngster could appreciate the remarkable artistry involved in creating these physical stop-motion sets, or envisioning what it might look like when Coraline’s challenge of her Other Mother begins breaking down the alternate world. Ongoing advances in computer graphics may have dominated the past 15 years of “event” filmmaking, but the hyperbolic determination to impress has ironically resulted in a kind of eye-candy fatigue. Coraline does something few movies manage to do any more: It leaves you simply amazed at what you’re seeing on a momentto-moment basis.

If there’s anything lacking here—as indeed it has been in Selick’s other features—it’s a real sense of connection to his characters. For some reason, the voice performances and physical workings of the characters don’t quite come together the same way they can in the most inspired conventional or computer animation, or even in Nick Park’s Plasticine-animated worlds. The result is a certain vocal flatness, reminiscent of the English over-dubbing of Miyazaki films like Spirited Away and Princess Mononoke. The characters may be bursting out of the screen at you, but emotionally, they remain at a distance.

Then again, fairy tales often result in something more archetypal than embraceable. Coraline employs unique visual spectacle to tell its spooky story—and leaves it to the marketing department to worry about the rest. CW

Other Mother and coraline in Coraline