Elected officials and members of the local Chinese community reflect on the spread of misinformation regarding the illness. 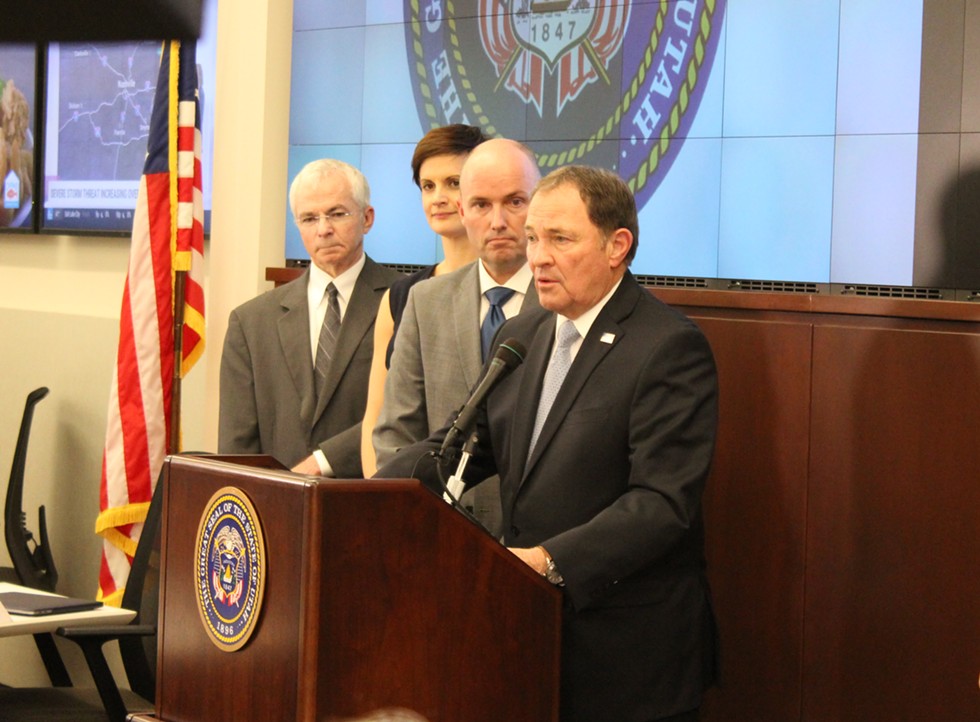 [Editor's note: Since the publication of this article, at least three Utahns have tested positive for COVID-19. For up-to-date information, refer to the Centers for Disease Control. For Utah-specific resources, click here.]

The annual Utah Chinese New Year celebration is normally a time of jubilation among Salt Lake City's Chinese American community. But this year's event, held at Skyline High School's auditorium on Jan. 25, was shrouded in an aura of uncertainty—at least among organizers.

"We almost considered canceling the event," Xiaoming Dong tells City Weekly. "We had just heard the news from China about this brand new virus, so there was a little bit of panic about what to do."

Coronavirus panic would come weeks after. At the time, Dong and a few of the other organizers, contacted the Centers for Disease Control and Prevention (CDC) as well as the Utah Department of Health for guidance, and ultimately decided to move forward.

"They told us to let people know that there's a potential risk, and that any new travelers from China should stay at home," he says. "We put up a big sign outside the performance hall, but most people didn't even know about coronavirus yet. We purchased six boxes of [respiratory] masks and provided them for free, but I believe I only saw two people wearing them. Maybe we were too early."

The evening of the festival, which featured performances by dancers and a choir, there hadn't been any confirmed cases of coronavirus, also known as Coronavirus Disease 2019 (COVID-19), in Utah. In fact, it wasn't until a few days earlier that the World Health Organization (WHO) announced the disease's official name, confirming Dong's suspicion that perhaps some festival attendees were still unaware of it and its rapid spread around the globe. Still, he did see a slight downturn in attendance compared to previous years.

"We did see a drop-off in attendance," Dong says. "Probably about 20% less Chinese people attended this year."

The CDC defines the virus as a respiratory illness that spreads from one person to the next, particularly while they're within close proximity to one another. The first identified case took place last December in Wuhan, in east-central China. The following month, Chinese authorities had placed the city's 11 million residents under quarantine in an attempt to slow the illness from spreading. Common symptoms include fever, cough and shortness of breath, according to the CDC. In some cases, patients have developed pneumonia in both of their lungs. Cut to March, and as of press time, there have been 92,881 global cases confirmed (118 of those in the U.S.) and 3,168 reported deaths.

The rapid spread of the disease—and misinformation around it—prompted Gov. Gary Herbert to call a meeting with fellow lawmakers and prominent members of the business community on Monday, March 2. Held at the Capitol's Emergency Operations Center, "stakeholders [from] around the state" huddled around small tables, each topped with a Purell hand sanitizer dispenser.

"We are hopeful," Herbert said, adding that he'd just had a conversation with Vice President Mike Pence, who is leading national coronavirus containment efforts. "The risk of America right now is low, but that's the current situation. The concern we have is what the future is going to be with the spread of this virus."

Herbert encouraged Utahns to put together a family plan should the need to "self-quarantine" arise and joked that his wife, Jeanette, was among those who'd visited big-box stores over the weekend to purchase bulk supplies, like bottled water. "We don't believe there's a reason to stock up on water, for example. The water supply is going to be OK, just turn on the faucet," the governor assured. "That's the kind of over-reaction that we're talking about we don't need to have."

Previous to the press event, the Utah Department of Health said it was "actively monitoring" any indication of a coronavirus outbreak occurring here, and that "no cases have been confirmed in Utah." (It only counts cases diagnosed in Utah as Utah cases.) But while Salt Lake City and the state remain free of the disease, the threat has rattled many residents. And there's a growing stigma associated with the local Chinese community.

"We are hoping for the very best outcome but we're preparing for the worst ..." Herbert continued. "There is no state better prepared than Utah. We have a culture of preparedness, we have a culture of caring about your neighbors, our spirit of volunteerism is legendary ... and the fact that we have a very fiscally prudent Legislature allows us to have reserves and money and resources available that many states will not have."

This reassurance still hasn't eased concerns among many in the Chinese community. "I have seen some of the effects it has had," says Taylorsville Municipal Judge Michael Kwan, chairman of the board of the Asian Association of Utah.

"We recently had a tour group of 40 people from China that got turned away from dinner [at a local restaurant]," he continues. "It wasn't because they were symptomatic, it's just that people ... had heard that they came from China. The group actually had been here for a while—they were driving through Salt Lake City to get to one of the national parks—and were told, 'Nope, we can't serve you.' There was some fear and really a lack of information and awareness of what the real risks [of coronavirus] are."

Such stories are becoming more common across the country, especially in larger cities. For example, in New York City's Chinatown, The New York Times reports that many restaurant owners have come face to face with near-empty dining rooms as locals and tourists alike have chosen to avoid them. On the other side of the country in San Francisco, the San Francisco Chronicle reports that the city's famous Chinatown has witnessed a huge economic blow with many locals and tourists avoiding this iconic part of the city entirely.

Andrew So, owner of Chinatown Supermarket in South Salt Lake, says he's noticed a dip in customer traffic during the first few weeks of the coronavirus announcement. However, he says that as people are learning more about the illness, business has picked up.

During a recent trip to the sprawling supermarket on a weekday afternoon, it was clear that locals still had a need for frozen dumplings, dried shredded squid and bamboo shoots. The two open checkout lines were several customers deep, and nearly all parking lot spaces were occupied.

"In terms of my business, we did see a slowdown at the beginning about two weeks ago," So says. "Based on the news of this outbreak at that time, I understand that it's human nature for people to be worried about a new, unknown virus, and people would like to protect themselves, their families, and their friends."

Calls to interview owners of three other Asian supermarkets and restaurants went unanswered.

"Right now, we know that there are no known [coronavirus] cases in Utah, and people are starting to learn more about the virus," So says. "I think that Utah is very well contained, and there's a very small chance that people will be exposed to it here. We are optimistic that business will remain normal."


With information from Enrique Limón