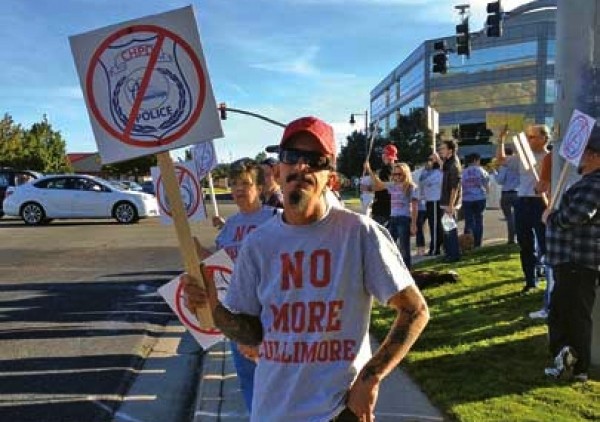 Four times a year, the Cottonwood Heights Police Department conducts undercover alcohol stings on bars and places that sell alcohol, including Lani Roberts’ 7-Eleven franchise on the busy corner of Wasatch Boulevard and Fort Union. Officers send in minors to buy beer to see if employees sell alcohol to them.

Before 2013, Roberts says, her employees passed every year, but in February and May 2013, two separate employees, according to CHPD letters to Roberts, “allowed the undercover minor to purchase alcohol.”

The employees were both fined $600 by Cottonwood Heights, and Roberts terminated them. Typically, she says, that’s where the matter ends.

After CHPD officers started using her parking lot to stake out neighboring bar the Canyon Inn, she had her employees ask them to leave. That resulted in CHPD Chief Robby Russo—who declined to be interviewed by City Weekly—inquiring to a 7-Eleven franchisee supervisor, according to 7-Eleven documentation, as to whether the employees’ “attitude” had to do with “the store being caught selling beers to minors.”

Then, in early September, Roberts was charged by Cottonwood Heights with two counts of selling or furnishing alcohol to a minor by occupant of premises, a class-B misdemeanor. Cottonwood Heights Mayor Kelvyn Cullimore says it’s simply a “code violation” being prosecuted in municipal court and that he is aware of other local business owners that have been cited, although he did not identify them. But neither Roberts, nor three DUI attorneys City Weekly consulted, had ever heard of a municipality prosecuting the owner of a bar or franchise for staff who failed a selling-to-minors alcohol sting.

“How Cottonwood Heights is taking on itself [to prosecute her] is beyond me,” says DUI attorney Tyler Ayres. “It certainly looks retaliatory.”

Roberts was part of a small but vocal group of 30-plus people chanting “no more police state” on a busy corner in Cottonwood Heights on Saturday, Sept. 28, a protest that Russo described on local TV news as being in response to his department’s “aggressive” DUI enforcement.

In Cottonwood Heights, which incorporated as a city in 2005 and formed its own police force three years later, controversy over DUIs, law enforcement and several local businesses has refused to go away. In the April 2011 cover story “In Your Face,” City Weekly looked at Stojack’s claims that the developers of the Canyon Racquet Club behind his bar wanted to close his and neighboring businesses in order to have a grand entrance to their property, and were using what Ayres, who represented Stojack on a traffic issue, terms police “over-enforcement” to pressure him into selling.

Stojack did not sell; Cullimore says the racquet-club development is still going forward and is expected to break ground in spring 2014.

Now, with a mayoral candidate raising questions about not only development but also public-safety issues, this 33,000-population town faces a mayoral race with its police department, for some citizens at least, very much at the heart of the election.

“I don’t have anything to say,” he says. “There’s no targeting going on. ... None of this is founded in fact. All of it is calculated to try and create something out of nothing.”

Cullimore is proud of CHPD’s aggressive DUI policy, which he says averages between 210 and 250 arrests each year. Though Cullimore says “there’s no formal quota,” a few years ago, Russo did put in place a “performance standard” of three traffic citations per officer per week that result in justice-court appearances.

In a July 19, 2011, e-mail to police supervisors accessed by City Weekly through a records request, Russo noted that at a July 2011 council meeting, “the Mayor/council noticed a steady decline in [traffic] citations.” Council woman Nicole Omer then e-mailed the police chief on July 16, 2011, “I believe you told us at one time that you had a quote in place for citations?” Several days later, Russo e-mailed his sergeants, calling his officers’ failures to meet his performance standard “insubordination” and threatening to “send the love on down” if they didn’t give three tickets a week.

Ayres says that a quota system “creates a situation where officers are incentivized to find what they’re looking for.”

In the months after Russo’s e-mail, citations shot up, although the jump in DUI arrests—known as getting “deuces” in cop slang—was due to one officer, Todd Leiendecker, over a series of months pulling in more DUI arrests per month than all other officers combined.

Cullimore praises Leiendecker for his DUI-arrest skills. “What’s the negative of writing three tickets a week?” the mayor asks.

But Cullimore stresses that tickets are not revenue-generators. After the state takes 65 percent of the revenues from fines and forfeitures, he says, the remaining 35 percent goes to help pay for the justice court that Cottonwood Heights shares with Holladay.

He says that the people complaining about police harassment are essentially just Stojack and “his associates,” and that Stojack has no solid evidence to back up his claims, but rather only circumstantial material.

That material is many hours of video footage of cop cars and their red & blue flashing lights outside Stojack’s bar, in his parking lot or pulling over his departing patrons. None of the other nearby bars—The Huddle, Hog’s Wallow and Market Street Grill—have complained publicly about similar issues.

In early 2012, Stojack says, the Utah Highway Patrol joined CHPD in harassing his bar and its patrons. In February 2012, he followed UHP trooper Neil Green, who had been staking out the bar from the 7-Eleven parking lot next door. Green pulled over, let him pass, then stopped Stojack and cited him for several traffic violations that were ultimately dismissed by Holladay justice court’s Judge Gus Chin.

UHP captain Steve Winward rejects Stojack’s theory that Green was working in conjunction with CHPD, but says that he does not want his troopers staking out bars. “That’s not our way of doing business.”

The most recent incident involving CHPD at the Canyon Inn, Stojack says, was the first NFL Sunday game, on Sept. 8, 2013. “The game was in full rage,” at the bar, Stojack says, when two CHPD trucks pulled up in the Canyon Inn’s parking lot in an arrow configuration, blocking traffic entering or exiting the lot for 20 minutes. One witness said it appeared as if the officers were exchanging a prisoner.
Prisoner exchanges, say law-enforcement sources, typically take place away from private property to avoid risks to officer, prisoner or public safety.

Attorney Peyton Robinson, a former police officer and fireman, is running against Cullimore for mayor. Each night that he goes out canvassing, he says, he typically hears several stories from residents upset by heavy-handed policing. Along with 36.5 authorized officers for 2013, CHPD benefits from robust funding of just over $5 million annually—one-third of the city’s total budget—which helps pay for vehicles including a command unit, five motorcycles (including a 2013 Harley-Davidson) and brand-new vehicles for all officers leased every two years. Cullimore says leasing is financially more efficient.

The years of being targeted, Stojack says, by a small group of CHPD officers has taken its financial toll, with Canyon Inn receipts having dropped 50 percent from 2006 to 2012. It’s also taken a toll on the health of Stojack’s wife, Kimmie; regulars at the Canyon Inn say she was once the face of the bar. In September 2012, she had a nervous breakdown.

While expressing sympathy for Kimmie Stojack, the mayor says he’s fed up with the ongoing saga of the Canyon Inn. “This is such a non-issue in my opinion. It’s a personal thing that has blossomed. It’s about two businesses that feel targeted somehow.”

Stojack, Roberts and mayoral candidate Robinson all say that they’ve talked to people critical of CHPD, but that those people are typically too scared of law enforcement to speak on the record about their concerns, thus denying Cullimore an opportunity to address anything beyond Stojack’s complaints.

“How convenient,” Cullimore says. “The people I talk to are very happy. If it is bigger than that, bring the evidence. Right now, I’m not seeing it.” A vendetta, he says, “is not the Robby Russo I know, and I would never tolerate personal vendettas in police work.”

Stojack and Roberts say they have taken their complaints to every authority and organization they can think of, including the Salt Lake County District Attorney’s Office, the Utah Attorney General’s Office and the FBI. “It went nowhere,” Stojack says.

But despite the lack of concrete evidence, Ayres says, “Ultimately, there’s no question in my mind Cottonwood Heights is picking on them. I don’t know why, and at that this point, I don’t know there’s any way to prove it.”

All Lani Roberts wants is to go back to her former life of working long hours and going home. “We just want to be heard, have someone investigate,” she says at the protest, as car horns continue to blare at the intersection. “In all these years, nobody has.”