Saying farewell to the ghosts and grandeur of the Frank E. Moss courthouse 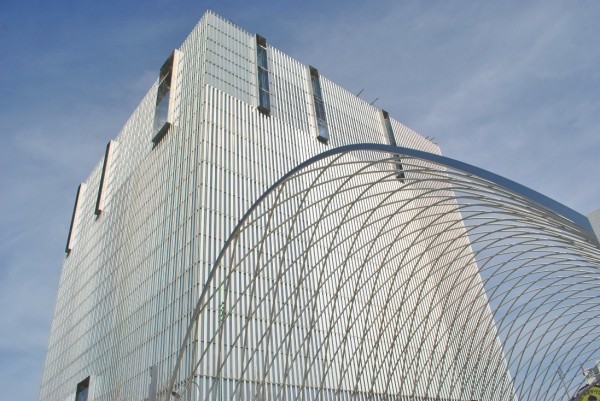 A pair of bullet holes—remnants of a 1927 shooting—can still be seen behind a judge’s bench in the Frank E. Moss Courthouse.

In another courtroom, the ghost of Judge Willis William Ritter—a lion of a man who was both revered for his smarts and ridiculed for his fickle temperament—is believed to still stalk the second floor, flipping on lights and whispering in ears.

Since 1905, the stout granite courthouse anchoring the corner of Main and 400 South has been the epicenter of the federal government’s presence in Zion.

But this proud 109-year history came to an end April 4, when judges, secretaries, librarians, clerks and federal marshals packed up their offices and moved a few hundred feet away into the new federal courthouse at the corner of West Temple and 400 South.

A flashy hulk of glass and metal, the new 11-story courthouse (yet to be named) casts a mighty shadow over its historic predecessor.

The new building acts as a giant solar panel, gobbling up natural sunlight to cut down on energy costs. The lobby, occupied by sport-coat-wearing federal marshals and metal detectors, stretches three stories up and has as a centerpiece a circular staircase wrapped in glass. White oak floors and walls lead to a bank of elevators, where the bottom of an 11-story art exhibit hangs inside a narrow atrium.

The new courthouse is much safer; judges will no longer share elevators with prisoners. And it’s wired like a Silicon Valley tech firm.

Although the new building is lavishly strewn with bells and whistles, the day-to-day business handled there isn’t likely to waver a bit from the century of justice handed down in the older building. And while the new courthouse will be the home to the Federal District Court of Utah long into the future, it remains to be seen if it will ever gain, through its cast of judges and the justice they hand down, the holy mystique attained by the Frank E. Moss Courthouse.

“The building was never foreboding,” says local attorney Jim Jardine, who first became familiar with the old courthouse as a clerk in 1974 for the late Judge Aldon Anderson. “The building just had a sense of fairness about it. When you headed down, you just knew that there would be an overall fairness and a sense of equality.”

The courthouse didn’t earn this reputation on its own. By his estimation, Jardine says, Utah’s judges have consistently been among the finest in the nation. And whenever he fields calls from lawyers around the country asking for insight about what to expect from the Beehive State’s judiciary, he tells them “they can have the highest confidence in the administration of justice for all.”

“When I first started attending, it felt like an old historic building, but one that had a grace and a secular sanctity,” Jardine says. “In a way, it’s been the quality of the judges that have given a halo effect to the building.”

No conversation about the old courthouse goes far before the name of Judge Ritter comes up. At once, Ritter’s tenure, which stretched from 1949 until his death in 1978, can be described as revered, scandalous and even disgraceful.

Ritter’s antics on the bench, including ordering federal marshals to arrest postal workers—who occupied a wing in the building—for making noise, and his love of the underdog and purported disdain for the LDS Church led to an effort by the U.S. Attorney’s Office in the 1970s to have the judge barred from trying federal cases.

Somehow, these critiques—even from one of his harshest critics, former U.S. Attorney Ramon M. Child, who filed the petition that sought to forbid Ritter from trying some cases—didn’t take hold.

As an assistant U.S. Attorney, local attorney Max Wheeler got to know Ritter well. At one time, Wheeler says, he was the only federal attorney Ritter allowed to argue cases in his courtroom.

And it was in Ritter’s courtroom one afternoon that Child, who was on the last leg of his short term as U.S. Attorney, came in and took a seat. Wheeler says Ritter stopped the trial and said: “Ladies and gentleman, I want you to meet Ramon Child, our lame-duck U.S. Attorney.”

Wheeler says Ritter considered the Frank E. Moss Courthouse an extension of his personal property, and “he treated it like it was.” Ritter lived across 400 South in the Newhouse Hotel, and he would amble between home and work on foot each day.

Wheeler recalls a day when a construction worker was running a jackhammer on 400 South. The noise was disrupting court, and Ritter was fed up. The judge had a marshal arrest the worker and, Wheeler says, from that day forward, construction near the courthouse occurred at night.

“It was interesting times,” Wheeler says. “I’m going to miss being in that old courthouse. It has a real history to it.”

When Bauman stood, Ritter asked him to take a seat behind the bench so the judge could keep an eye on him.

Bauman remembers being in Ritter’s courtroom on so-called “rule days,” when Ritter, after long stretches of inactivity, would call dozens and dozens of cases all at once. The courtroom would be packed with attorneys and witnesses. And if someone wasn’t ready to make their case, Ritter was known to flat-out dismiss it.

It was one of these days when Bauman had to go sit behind the velvet rope that separated the judge from the gallery. “Aren’t you that Deseret News boy whose been writing all those articles about me?” Bauman remembers Ritter asking.

Mark Jones, the clerk of the court, says Ritter was also known to approve or disprove the appointment of federal probation officers over a bottle of bourbon. “He poured himself one and one for the candidate and he said, ‘You got the job if you drink this up for me.’ ”

Bankruptcy court will still be held at the old courthouse, but the rest of the space will house as many as 500 federal employees from various departments.

With business just getting underway at the new courthouse, some longtime court employees are already feeling pangs of loss.

And, love it or hate it, the new courthouse, which Wheeler called “ugly,” has a steep hill to climb before it gets its own halo.

“There’s a familiar affection to it,” Jardine says of the old building. “There is a grandeur in old buildings that is difficult, if not impossible, to capture—to retain in a new building.”