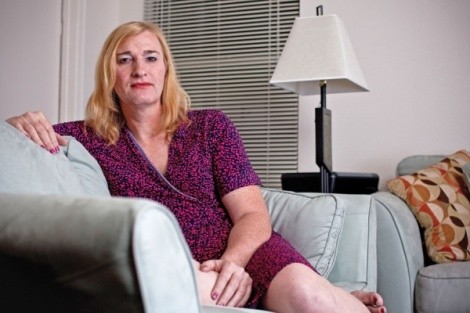 The gender reassignment surgery that Sophia Hawes underwent in May was a life-changing experience. She finally felt complete after years of being caught between identities since she’d started cross-dressing at age 16. After decades of doubt and confusion, lies to herself and her loved ones, a failed marriage and three failed suicide attempts, for the 46-year-old Hawes, waking up from the sex-reassignment surgery was like being reborn.

“The minute I woke up from surgery, I knew everything was right,” Hawes says. “Everything was perfect.” Finally being able to own her female identity—body and soul—Hawes considered the procedure she undertook by a renowned surgeon in Thailand to be a life-saving operation. Her health insurance didn’t see the operation that way, however, denying any coverage of the procedure for which she paid $16,000 out of pocket.

While Hawes had even had a broker agent provided by her employer confirm that SelectHealth policy booklet did not specifically exclude the procedure from partial coverage, Hawes was denied—and then some. SelectHealth also looked back over her file and denied coverage for certain treatments she had received before her surgery in May, arguing that those procedures—which included a test for a blood disorder Hawes has had all her life—were related to the reassignment surgery.

For Jude McNeil, a training director for LGBT advocacy organization the Utah Pride Center, transgender individuals regularly get discriminated against by the bureaucracy of insurance companies.
“People are being denied [medical] service just for being transgender—they get labeled,” McNeil says.

Hawes, a Maine native, has spent her whole life looking for herself. When she was in college in the early ’80s, being a woman meant cross-dressing and growing her hair out and praying that God would change her body. It wasn’t until the late 2000s, however, after years of counseling and eventually hormone therapy, that Hawes made the full surgical transition into womanhood and sought to have her insurance provide partial coverage.

“This is a medical procedure that is neither cosmetic nor experimental,” Hawes says, referring to a recent resolution by the American Medical Association supporting insurance coverage of treatments that include gender-reassignment surgery for treatment of gender-identity disorder (ed. note: this sentence has been corrected to clarify the AMA's position). Without treatment, those diagnosed with GID can suffer “psychological distress” and “debilitating depression” that can lead to suicide and death. Hawes knows these symptoms personally.

In 2006, Hawes was 41 and married with two daughters and realizing her identity was a lie to her wife and to herself. After seeking therapy, Hawes decided she had to change. When Hawes told her wife, however, and began taking hormone therapy, the marriage became traumatic.

“It was like living with my own ghost,” Hawes says. “She grieved the loss of her husband. I tried on three separate occasions to kill myself because I couldn’t go back and get her to see me the way I was.”

After a painful split, Hawes continued on with the therapy and made the final transition with her surgery in May. She knew that she could only even attempt to claim the insurance coverage by following the AMA’s guidelines, meaning that she received an official GID diagnosis, then began hormone therapy a year later and had the final reassignment surgery almost four years later.

SelectHealth, however, has disagreed and is now challenging Hawes’ appeal. According to the members booklet provided to Hawes, reassignment surgery is not listed as an excluded procedure, but as a spokesman pointed out, it’s also not listed under covered services. The booklet does not list all specific covered services, but SelectHealth spokesman Spencer Sutherland says standard plans don’t cover the procedure. While not able to speak about specific clients, Sutherland wrote, via e-mail, “Additionally, we do not treat complications from non-covered services.”

Although Hawes understands SelectHealth’s own booklet is vague about the procedure, she was stunned when, in the months following the claim denial, SelectHealth denied her coverage on medical visits that happened before her reassignment surgery. The denied visits included a genetic testing related to a blood disorder Hawes has had all her life, an emergency room visit related to a urinary-tract infection and a CT scan trying to pinpoint symptoms resembling menstrual pains.

The CT scan, Hawes says, may have been most perplexing to doctors, since Hawes believes she may have been born with female tissue. Throughout her life, she’s had pains similar to menstrual cramps, and through granular tissue had even experienced bleeding in the past. These symptoms of a possible undiagnosed intersex condition became more frequent after she started hormone therapy.

With her doctors still not being able to identify the mass of tissue, Hawes says the CT scan was necessary to make sure it wasn’t a tumor. But now she worries about how she will be able to afford further tests and treatments that might be necessary to ensure the tissue isn’t cancerous.

“I’m afraid that if anything occurs going forward, they’re going to label it as a complication” related to the gender-reassignment surgery and deny coverage, Hawes says.

McNeil says that “100 percent” of trans individuals with health insurance have made similar complaints to her. She points out that menopausal women regularly take hormone therapy without being flagged by their insurance company.

“But it’s only when people take hormones for transgender [issues], then all of a sudden there’s all these risks,” McNeil says. She says the flagging problem affects doctors, as well, adding that she only recommends patients to one trans-friendly doctor in the state.

Matt Wood, an attorney at the Transgender Law Center in San Francisco, says most insurance companies discriminate against transgender members like Hawes by failing to recognize that trans-related procedures are more than “cosmetic.”

“Even ‘cosmetic’ treatments can also be medically necessary when there is strong medical evidence that the treatment is effective,” Wood writes via e-mail. “Insurance policies often cover breast reconstruction for breast-cancer survivors if the patient’s doctor determines that it is appropriate and medically necessary.”

Hawes doesn’t regret her transition even after all her insurance troubles. She now lives the life she wants, splitting her time between her job, her church, running a trans support group and her new passion of belly dancing. Unfortunately, fighting back against her insurance company is something she feels she has to do even if she doesn’t want to, especially after being denied coverage on ailments unrelated to her transition.

“It feels like retaliation right now,” Hawes says. “Whether or not that’s the intent, that is the effect.”