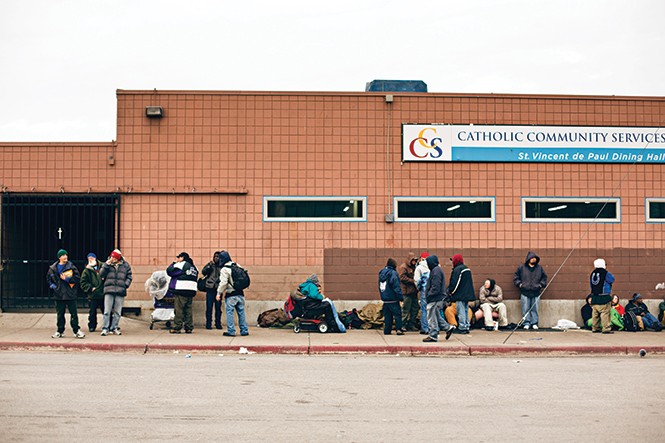 Incumbent officeholders in an election season have to face a veritable firing squad of critical bullet points from their opponents. Salt Lake City Mayor Ralph Becker has faced, ducked, dodged and had to bite various bullet points from his mayoral challengers for months, including the criticism that Becker did not take the downtown homelessness problem seriously.

But in late July, Becker took the ammo away from challengers by announcing a homeless strategy that would include city-funded social workers in the area, a new hotline (801-799-DNTN, for "downtown") to report problems—and, most importantly, a dedicated "beat" of six-to-12 bicycle officers who will stay permanently in the shelter area.

Becker and Salt Lake City interim Police Chief Mike Brown assured media at the press conference that the city can't arrest its way out of the homeless problem, but that it can target serious criminals in order to make it easier for those who need help to get it. This "new" strategy, however, is not very new in some respects; in June, the call for social workers to help out downtown was heralded by Salt Lake City Councilman Charlie Luke, who also led the fight to hire more police officers—against the wishes of then-Chief Chris Burbank. In spring 2015, Burbank told City Weekly new officers hired for the shelter area could potentially find themselves ticketing and arresting people simply to justify their salaries ["Protect and Serve," June 4, 2015].

What is new about the city's approach is, perhaps, exactly what Burbank feared: A new emphasis on "community standards" policing that will step up targeting homeless residents for minor offenses such as jaywalking, public urination, open-containers and public intoxication.

"While those aren't high on the list of serious criminal offenses, they are illegal and they take away from and detract the quality of life for people—not just visiting, but people living there," says police Lt. Josh Scharman, who will oversee the project. Combined with other measures, he says a focus on petty crime will play a role in revitalizing the neighborhood.

Scharman was a SWAT commander before he joined the Metro Support Bureau where he is now tasked with overseeing services and public safety in the homeless-shelter area. Scharman has taken over the bureau from Deputy Chief Fred Ross, who has moved to investigations. Ross' role with the bureau was criticized by some in city hall—not for poor performance, but for the fact that, as head of the Homeless Outreach Services Team, he personally drove homeless individuals to job interviews.

Scharman says that, for the time being, the Homeless Outreach Services Team (HOST) officers will continue to transport shelter clients to appointments, but he's not sure if HOST will continue to fill that function in the future. Eight new social workers will be deployed during the next few months, and Scharman says that role may be passed on to them—although it's uncertain what vehicles would be used to transport homeless individuals to job interviews and appointments.

Scharman stresses that the department is not trying to criminalize being homeless, and that the new approach is meant to target and clear out the hardcore criminal element, a contingent of dealers often distributing drugs for dangerous Mexican cartels. The more visible police presence, Scharman says, will also be augmented by a more stealthy element—undercover officers, purchasing drugs and busting dealers. One week into the new strategy, Scharman says officers busted a dealer who had more than $8,000 on him from a single day's worth of slinging.

"If we can eliminate some of the drug dealing, if we can sort that out, then we can identify the people we can really help," Scharman says. But between drug busts and dealing with other criminal activities, officers will keep busy targeting minor offenses. "It's important to have standards and expectations, and we expect them to obey the law like any other community," Scharman says.

This prong of the new homeless strategy is raising eyebrows with Bill Tibbitts of the Crossroads Urban Center, an organization that advocates for homeless and low-income Utahns.

"Chief Burbank was always very clear that he understood that homeless people have civil rights, and so you don't hassle them just because you hope it will make them go away," Tibbitts writes via email. "It is not clear that the people running things now have that same understanding."

Some are concerned that this kind of nuisance policing could work too well downtown—and simply shift the homeless from Pioneer Park farther west.

Nan Weber, a member of the Poplar Grove Community Council, says over the past couple years, more and more homeless individuals have migrated from the shelter area to camping along the Jordan River trail or in west-side parks. She worries the new police strategy could push more of the homeless away from downtown and its services, and to the west side. "Moving folks from downtown where [support] facilities are and scattering them about in places with no facilities doesn't help them," Weber says.

For Anna Brower, a spokeswoman for the American Civil Liberties Union of Utah, this get-tough approach is highly troubling.

"Salt Lake knows how to reduce homelessness: Give people stable housing," Brower writes via e-mail. "Putting people in jail because they do things outside that the rest of us are able to do in our homes—such as go to the bathroom, go to sleep, have a drink with a friend—is an expensive, ineffective way to keep our communities safe."

Scharman, however, is not a newcomer to the shelter area. He has already established relations with the community, and he hopes they will continue. While Scharman recognizes that targeting minor offenses could alienate some homeless people from helping police target serious criminals, he also believes that the homeless themselves want to see better standards in their community.

Scharman recently held a forum where he polled homeless residents on the idea of standards, and he says, the homeless were overwhelmingly supportive. "They believe the community should have expectations too," Scharman says. "Nobody likes coming into contact with a puddle of urine or a pile of feces on the sidewalk. Even people down on their luck shouldn't be exposed to that—and they don't want to be.

"[It] is a fine line we're walking with maintaining relationships with the homeless," Scharman says, "but we've been very successful so far at maintaining that balance."