Annual celebration of all stuff DIY 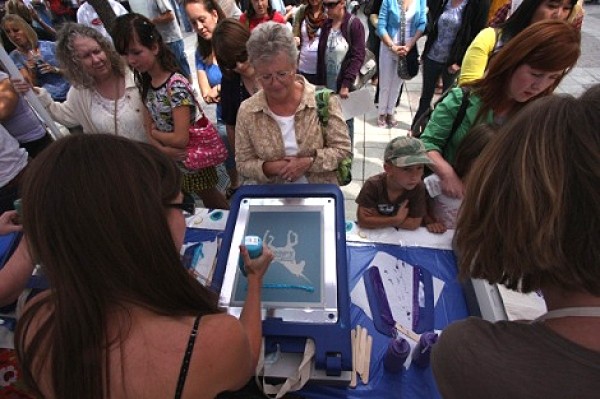 The do-it-yourself philosophy—more commonly referred to as DIY—has a long history. Long before most everything became outsourced and mechanized, DIY was simply necessary for everyday survival.

But the increased popularity of DIY at various points in history can be considered a reaction to other cultural circumstances—e.g. the Industrial Revolution was directly responsible for the arts and crafts movement of the late 19th century. Currently, one could argue that the emergence of modern society into an all-encompassing technological age has once again spurned a quiet revolution and revitalization of a thriving DIY community.

“One of my main goals with Craft Lake City is to redefine the term ‘craft,’ ” says Angela Brown, creator of the festival and editor of SLUG. “It isn’t just dollies that Grandma makes. It is real, original, handmade art—no matter what tools one uses. This is the beauty of the creative spirit—the act of making. It is also important to me to take art out of the gallery and into the streets for everyone to be inspired by.”

Held at the Gallivan Center in downtown Salt Lake City, Craft Lake City is designed to bring together and highlight different facets within the local handmade scene, including music, food and art. In addition, this year, organizers decided to expand the festival’s horizons even further by partnering with XMission to create a science & technology building to exhibit DIY engineering—like circuit bending, robotics, 3-D printing, gaming and computer animation. DIY engineering goes beyond building clocks—now it’s not unusual to construct a nightlight full of LEDs and fiber optics, or even your own set of speakers from old cigar boxes. A similar sensibility for inventiveness and creativity drives both the DIY artisan and the engineer. “Nerd culture is on the rise,” Brown says. “It’s hip to wear black horned-rimmed glasses and read comic books. I believe nerd creativity is understated. Instead of using oil paints and a canvas, DIY engineers are hacking apart old TVs, computer parts, toys and rebuilding what’s in their mind’s eye. To me, this is another form of art.”

One of the engineers slated to participate in this year’s craft-a-thon couldn’t be more excited to show off his vortex canons. James Howard of MakeSLC realizes that “the future has blurring lines. Crafts are getting electronic, and electronics are becoming commonplace in everything we have. Look at Google glasses [a project that allows you to experience the world enhanced by immediate Web interaction through a pair of glasses]. The really interesting stuff happens when you mix biology into the mix as well. So I think in the near future they will all work together.

“We each have our own specialties and that is what makes this an awesome event. We can all learn from each other,” Howard continues. “[Craft Lake City] is a place where people with many different ideas can get together and share their knowledge and learn about something that makes what they do even better.”

That is definitely one reason Brown started the DIY festival in the first place. But it’s also a great space for a younger generation to learn creative ways to unplug from an over-industrialized commodity market.

Allison Harbertson, owner and operator of The Creative Capsule, a 1963 Airstream turned mobile craft studio, sees this aspect as the real energy driving the festival. “Craft Lake City represents a new wave of crafting which we feel is really a reaction against the very mass-produced consumer/product world we’ve all been living in for the last couple decades,” she says. “People crave connection to things and each other. You can definitely see this at Craft Lake City. It is full of people reinterpreting traditions in a new, hip and fresh way. We can’t think of anything better than making or receiving something made by two hands rather than a machine.”

So by thoughtfully creating products with “emotion, time and vision,” Brown says, we ultimately imbue them with a living essence. What was once necessary for survival has become a way to grasp for some kind of traditional rootedness in the modern world.