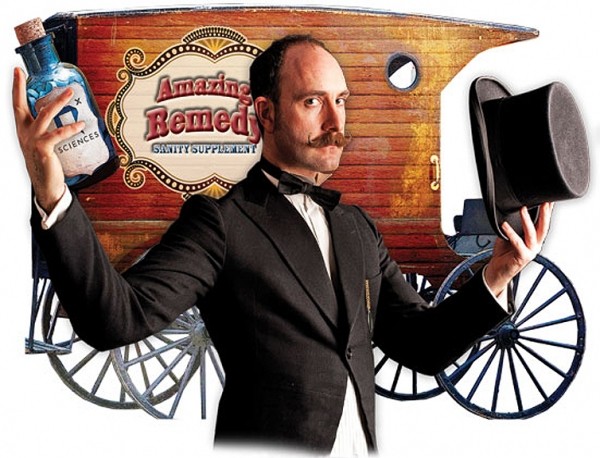 Nearby, kids chase balloons while families line up for hot dogs and cookies. Other tents and tables offer information about mental-health services to attendees of the annual walk, held by the National Alliance on Mental Illness. The event, an effort to fight the stigma of mental illness, is for those whose loved ones are dealing with a mental-health issue or who are living with one themselves—and for those who live only with the memories of those lost to the darkness of depression and suicide.

And at the Q Sciences tent, a woman is holding out a light in the darkness, an all-natural supplement that can treat “any mental illness.”

“It’s a vitamin that you take instead of taking your prescription meds,” the woman says with an enthusiastic smile.

This seeming miracle product is a micronutrient formula called EMPower Plus Q96, designed to provide vitamins that, the woman says, are lacking in the brains of those with mental illness.

She cites her husband as a success story; he went off his bipolar medication, thanks to the supplement.

“My 9-year-old has ADHD and I’ve taken him off his meds, he sleeps better and his behavior is the same as if he was on his prescription,” she says.

Yes, EMPower Plus Q96 supporters—and salespeople—hail it as a revolution that will bring relief to millions and loosen the pharmaceutical industry’s chokehold on the mental-health business.

And critics call it snake-oil quackery of the worst kind.

No randomized, controlled tests have demonstrated the efficacy of the supplement, developed in Canada by Mormon business partners. The product’s founders instead cite a number of informal research studies and powerful testimonials.

But while some have had life-changing success stories, others have seen their lives changed for the worse.

In 2011, in Vancouver, British Columbia, the parents of 27-year-old Jordan Ramsay decided they wanted to take their son, who had a long and troubled history with schizophrenia, off his medication in favor of using the EMPower Plus vitamin formula.

Ramsay also had a history of devolving into crisis when he was off his medication, and that pattern continued when he switched to taking only the EMPower Plus supplements. In November 2011, Ramsay used a wrench to bludgeon his parents while they lay in bed, killing his 53-year-old father and severely injuring his mother.

Ramsay’s aunt later told media outside of a 2012 court hearing that Ramsay had believed his parents were aliens and he had to make sure they were dead.

While the product has been sold in the millions of bottles in Canada and is now being marketed and sold in the United States by Q Sciences, the federal Food & Drug Administration doesn’t have anything to say about the product because it’s a supplement—meaning that it can’t legally be marketed as a drug that can be used to treat mental illness. But that’s exactly the way Q Sciences distributors touted the product at the NAMI event.

Q Sciences CEO Daren Hogge says he was upset to hear that a distributor selling the product was making such a claim. In an e-mail, Hogge said the woman selling products at the Salt Lake City NAMI Walks would be suspended if the allegations were true. “Compliance is a very serious issue to Q Sciences,” Hogge says.

Rebecca Glathar, the executive director of NAMI Utah, says she’s heard from others about the claims that the Q Sciences distributor was making at the Oct. 19 walk. She says the group paid to join the event the day before it occurred and that NAMI is looking into the matter and will likely re-evaluate the vetting process for vendors who apply for future events.

Though the woman selling the supplement at the NAMI Walks was in violation of federal law and Q Sciences’ own corporate policy, she was also just one of the many distributors in the Q Sciences multilevel marketing (MLM) company. As an MLM, the company markets its products largely through face-to-face meetings, with distributors acting as independent business owners (IBOs) who make monthly payments for Q Sciences products that they then sell to others, who in turn may also become IBOs, with a portion of their profits going up the chain to the IBO who recruited them.

Q Sciences’ Hogge says this “word of mouth” business model saves money on traditional retail costs, allowing those savings to be passed on to IBOs and other customers.

For Utahn Jon Taylor, a longtime critic and MLM watchdog, this business model also allows IBOs to get away with making outrageous claims about what their products can do, without risk of getting caught by the FDA, or the MLM parent corporation being liable if the IBO is somehow caught.

“The company is shielded in some degree from legal action because they can just say, ‘These people are making claims they shouldn’t have’; they can just blame the distributors,” Taylor says.

But do overzealous salesmen make for bad medicine?

Though Q Sciences founding distributor Scott Malone’s statement at a meeting of potential IBOs that “this continues to be and is the most researched product in the history of the world” was hyperbole, EMPower Plus is indeed a well-researched micronutrient formula. The product has been featured in 22 studies, but as ElLois Bailey, a psychiatric mental-health nurse practitioner with University of Utah Health Care, explains, “not all studies are created equal.”

Bailey finds the studies that have looked at Q Sciences’ EMPower Plus Q96 to be lacking in many ways. But, that being said, Bailey is a believer in the role of proper nutrition in helping to improve mental health. She’s studied the topic extensively, and completed her master’s synthesis on the effects of nutrition patterns on late-life depression. 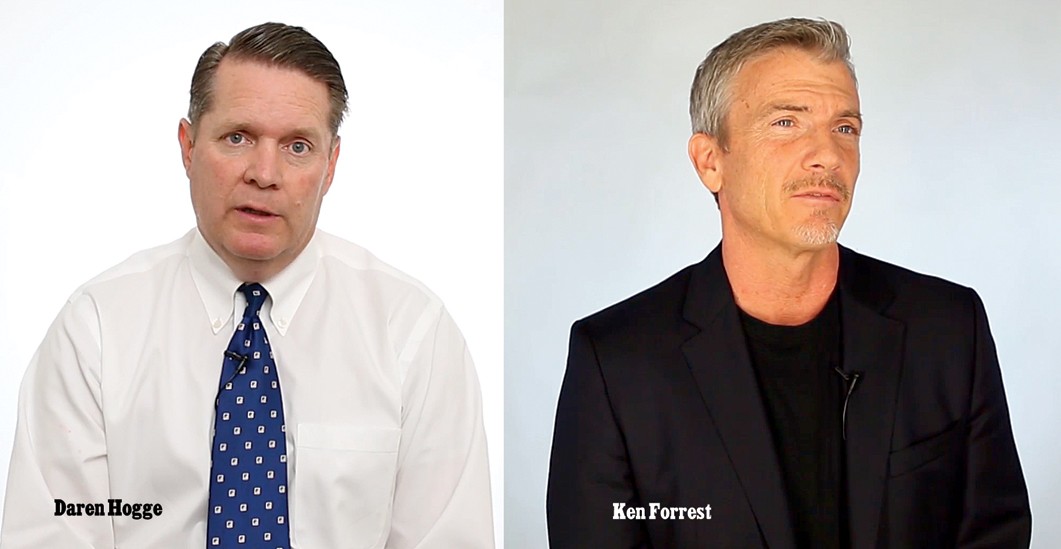 Pain, Pigs and Profit
Depending on whether one is a believer or a skeptic of the EMPower Plus supplement, the origin story of the multivitamin could either be a source of inspiration or the punchline of a joke. For believers, the supplement was the creation of a man desperate to find a remedy to the mental illness that took his wife and threatened his children. For critics, the salient fact is that the design of the supplement was based on a feed recipe given to pigs that were prone to ear-and-tail-biting syndrome. Both stories are true.

Anthony Stephan, a devout member of The Church of Jesus Christ of Latter-day Saints in Alberta, Canada, was away on business when his wife took her life by asphyxiation after affixing a hose to the exhaust pipe of the family minivan. Stephan’s wife had been diagnosed with bipolar-affective disorder, the same ailment that had afflicted her father, who had also taken his life.

Soon after his wife’s death, two of Stephan’s children were also diagnosed with bipolar disorder.

“It was like a nuclear bomb had been dropped right in the living room,” Stephan says on the Q Sciences-produced video The Tony Stephan Story.

Stephan felt that traditional medication didn’t save his wife and wouldn’t help his children. He turned to friend and fellow LDS wardmember Stephen Hardy, whose background was in agriculture as a feed formulator. Hardy suggested a nutritional supplement could be formulated to help Stephan’s children, given that similar symptoms seemed to be exhibited by pigs.

The duo formulated their micronutrient and tested it out on Stephan’s children, who, according to the video, felt an effect and were soon able to discontinue taking their medications.

From there, the duo formed the company Synergy Group of Canada, more commonly known as Truehope, an affiliated nonprofit. Their supplement was a patented, 36-ingredient combination of 34 common vitamins and minerals, including magnesium, zinc, vitamins A, D, E and B, and two antioxidants.

While the product was buoyed by Stephan’s own testimony of the good it had done in his family, it was also supported by a 2001 clinical study that found promise in the supplement’s treatment of mood disorders. Charles Popper of Harvard University’s McLean Hospital tried the supplement on 10 adults, nine adolescents and three pre-adolescents, all of whom had bipolar disorder, and found significant improvement in his patients’ symptoms.

The Harvard approval helped spur greater interest and sales in the EMPower Plus formula, but Canadian health officials were nevertheless concerned that the product was being touted as a drug. In 2003, Royal Canadian Mounted Police raided Truehope headquarters and seized the company’s computer files.

That year, the Canadian health officials of Health Canada also issued the first Health Hazard warning against people going off prescription medicine in favor of the product.

In 2006, Health Canada pressed charges against Truehope, arguing that the product was packaged as a drug without approval. Health Canada dropped all but one charge before trial, and eventually lost the case.

But though Truehope has seized on the court case and a handful of supportive research studies as a victory, even researchers who have expressed support of the micronutrient have sounded a cautionary note.

During the trial, Harvard’s Popper told a Canadian court that he would not recommend the supplement as an established treatment without more rigorous study. It’s a statement that echoed a point he made in that promising 2001 study on his patients: “The possibility of a nutritional alternative to drug treatment may raise hope and carry the risk of igniting public interest beyond reasonable bounds.”