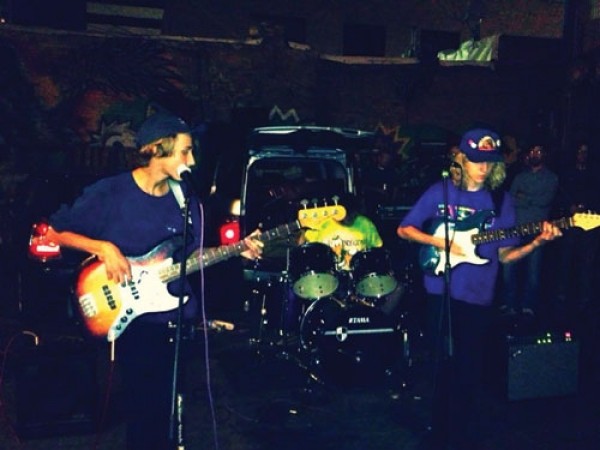 Taking the form of the root of an ancient tree, sinking into the earth beneath the forest and slowly absorbing cool, dark water. Transforming into a beetle and climbing up the stalk of a mushroom to reach the morning sun, the air thick with pollen. Taking the hand of a being that’s old and unnamed but somehow familiar, and following them into the darkness. Moonlit mountain peaks like fangs. Blood.

The images that take form in the mind when listening to Salt Lake City neo- psychedelic band Creature Double Feature are strange and spectacular indeed. Hypnotic almost to the point of intoxication, as spellbinding as an incantation spoken by a honeyed tongue, Creature Double Feature’s music weaves a mesmerizing magic.

Teenage brothers Davis and Mason Johnson are the creators of Creature Double Feature’s strange sonic worlds, filled with invisible forces and cryptic communications. They’re also explorers, probing the barriers between the physical and spiritual realms. Their often nature-centric music documents those journeys into the unknown, as well as the mind-expanding points where humans cross paths with the supernatural and surrender to that power.

“I think of Creature Double Feature as being about a feeling of duality or cognitive dissonance,” says vocalist and multi-instrumentalist Davis. “Like the feeling of other people being in your head and not being exclusively in control.”

In the short amount of time Davis and Mason have been writing music as Creature Double Feature (only a few years), they’ve been astoundingly prolific, releasing a variety of home-recorded EPs and singles as well as six full-length albums, including the new Full Circle Love Song.

They’d already honed their skills in experimenting with diverse styles—from psych-rock to folk to trip-hop—on their many past albums, so on Full Circle Love Song, Davis says, “I feel like we were able to execute something that was a lot more articulate than any of other albums. ... Every album is kind of its own little world, so by making the whole album and exploring that whole world, it’s like a whole new base of knowledge.”

Full Circle Love Song also finds Creature Double Feature discovering their truest sound. “I feel like this is kind of the album that I’ve always wanted to make but haven’t been able to,” Davis says. “I see all our other albums as turning on the lights in different rooms. But now, I’ve illuminated enough rooms that I can settle into the house.”

To say the songs on Full Circle Love Song are detailed doesn’t begin to do them justice. After Davis and Mason “lay out the bones of the song” with guitar and vocals, Davis says, he takes the rough recordings into his basement studio and will “spend hours just finding sounds and making sure everything is right.”

Building up multiple layers of distorted vocals, pitch-shifter guitar pedals, a drum kit and drum machines as well as a kaleidoscopic array of instruments such as glockenspiel and a Zimbabwean thumb piano called a kalimba, Davis lovingly brings the songs to life. “I think of recording a lot like painting,” he says. “When I lay down the basic guitars and the basic vocals, it’s kind of like wash, and there’s not a lot of definition to stuff. So then I like to come through with more sharp instruments to refine certain parts.”

And “since the setup is so lo-fi,” he says, it’s not a rare for some elements of a final recording to blend together and no longer bear any resemblance to earthly instruments.

“I don’t want you to be able to pinpoint every instrument on it,” Davis says. “I like to leave the element of mystery.”

There’s plenty left to the imagination when it comes to the messages contained in Full Circle Love Song as well. One of the most significant themes on the album is a reverence and respect for nature, and several songs advocate veganism (“Shaken”) and mourn environmental destruction and contemplate humanity’s future (“Goodbye”). But instead of these issues being screamingly obvious, they’re addressed “in a more subtle way, so it’s not an overtly political album,” Davis says. On the album, “I wanted to inspire a love of nature and also hint at a couple of issues, to reach people’s hearts and make them care about these things.”

While some of the encounters with nature described on Full Circle Love Song are carefree and sun-dappled, like in the song “Hello,” some are sublimely terrifying and ghostly, such as the climactic “Magic Mirror.” But as an all-encompassing “love song for the Mother Earth,” Davis says, Full Circle Love Song couldn’t shy away from the bleak and destructive aspects of nature.

“I wanted to make it like the whole love song, like a mature love song that’s the whole full-circle picture,” he says. “The goods and the bads, and the happy moments and the really dark moments, and just everything in between.”