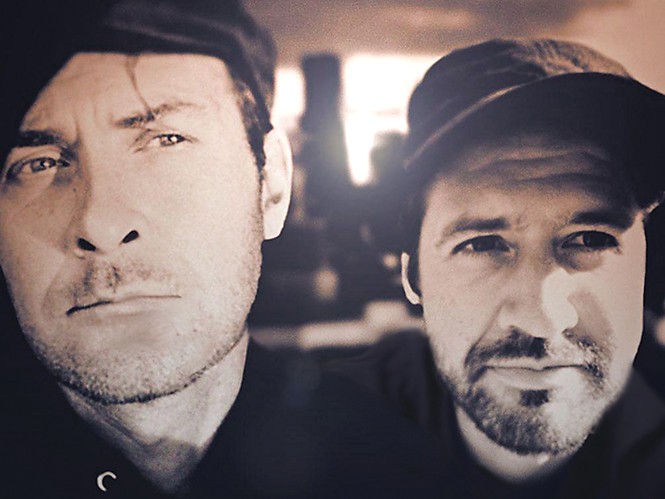 During the day, the beach is a sunny, welcoming place where people feel comfortable removing most of their clothes and throwing Frisbees with strangers. At night, it takes on a more sinister tone. The water becomes hungry and ominous, the sand refuses to yield to your toes and the otherwise soothing sound of the breakers resembles the breathing of an enigmatic stranger who might be following you to your car. A moon-drenched surf on a long-forgotten shoreline is exactly what comes to life on Night Tides (Moon Sounds), the newest album from Lunar Twin.

This evocative, tropical noir sound is partially inspired by the literal ocean separating multi-instrumentalist Chris Murphy and vocalist Bryce Boudreau. Murphy creates Lunar Twin's layered, synth-saturated arrangements locally and sends them to Boudreau, who writes lyrics and tracks vocals from his home on the big island of Hawaii. "We're always messaging—lots of texts and emails," Murphy says on a conference call with his bandmate. "We have a good relationship—we can both be creative without interfering with one another's creativity."

Murphy and Boudreau met in 2011, while the former was playing with Night Sweats (not to be confused with Nathaniel Rateliff & The Night Sweats). The band was headed to the Denver Underground Music Festival, and Boudreau decided to join. "It wasn't until later that we started to work together," Murphy says. "He was in Hawaii and he liked a song that I had made and asked to put vocals to it. From there, we just kept making tunes, and it turned out to be something bigger than we expected." After the pair found the sweet spot for their long-distance collaboration, they released their first self-titled EP (Lunar Industries) in 2015.

With their single "Champagne," the duo was able to reach across the Atlantic and establish themselves. "We didn't have many gigs at the beginning, so we just started checking out other bands who played the same kind of music as we did," Boudreau says. Many of these acts were already established in Europe and they suggested Lunar Twin contact a German label called Emerald & Doreen. The duo sent a demo and, Boudreau says, "they contacted us right away." This led to the release of the EP Champagne (Remixes).

Tonally, Night Tides continues to explore the work that Lunar Twin pioneered on their EP. Images of haunted tropics and coastal neon rise from Boudreau's overcast lyrics, and his gravelly croon ebbs and flows with tidal rhythm. Despite the geographic distance between the two men, Murphy's thoughtful, deliberate arrangements mesh perfectly with Boudreau's vocals. It's not what one expects of music inspired by a tropical island, but it doesn't all have to be upbeat cheeseburger-in-paradise fare. Rather, Night Tides succeeds at capturing a darker nuance of the islands, as well as another irony.

"The more time you spend in Hawaii, the more you get away from beach culture," Boudreau says. "Maui and Hawaii Island, where I live, [are] very mountainous. Lots of back roads and no freeways—it's very different from the Waikiki vibe." Murphy, who visited Maui with his girlfriend while Lunar Twin was recording, had the same experience—one that stuck with him. Night Tides' title track, which closes the album, was created after he returned from the island, he says. "It helped bring the whole album to fruition, and I really like how it turned out."