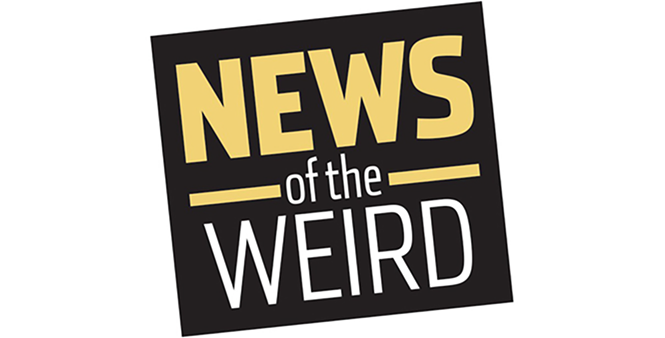 Curious Tradition
Animal Help Now, a group that assists in "animal emergencies," has gathered almost 160,000 signatures on a petition to repeal legislation allowing "Possum Drops" in North Carolina. In a number of communities in the state, the custom of putting an opossum in a transparent box, suspending it in the air and then slowly lowering it to the ground is a feature of New Year's Eve celebrations. Organizers in Brasstown told the Raleigh News & Observer they ended its Possum Drop after the 2018 event because it's "a hard job to do, and it's time to move on," but they maintained that the tradition does "absolutely nothing to harm" the animal. Animal Help Now, however, is continuing its campaign against the state statute that makes it legal for people to treat opossums however they wish between the dates of Dec. 29 and Jan. 2.

Bright Ideas
Maybe they're betting no woman will reveal what she weighs in public, but the Fusion Club in Dubai, United Arab Emirates, is offering women free drink credits based on their weight. For example, a woman who weighs 150 pounds would receive about $18.50 in free cocktails. Anil Kumar, spokesman for the club, told Insider that while they have a scale behind the bar, they will also accept a woman's word about what she weighs. "They can just write the weight on a paper and give it to the bartender discreetly," he said. "Very simple, no strings attached. We wanted the ladies to surprise their partners and friends that it's good to gain weight!"

• A 16-year-old boy was detained by U.S. Border Patrol agents on Nov. 17 after an agent saw him hiding in brush about a mile north of the Otay Mesa Point of Entry near San Diego. Authorities said the teenager had a remote-control car with him, along with two large duffel bags stuffed with 50 packages of methamphetamines, weighing more than 55 pounds and worth more than $106,000. Border Patrol spokesman Theron Francisco told The San Diego Union-Tribune that authorities believe the car was used to carry the bundles across the border, making many trips through the bollard-style fence from the south side and driving to the teen on the north side. The boy was charged with drug smuggling and held in juvenile hall.

Yeah, No
If you're passing through the seaside city of Fukuoka, Japan, here's a tip for a cheap hotel: A night in room No. 8 at the Asahi Ryokan will cost you just $1. And your privacy. In return for the low rate, your entire stay in your room will be livestreamed on YouTube. Hotel manager Tetsuya Inoue told CNN on Nov. 20 that while the world can watch the room's guests, there is no audio, so conversations and phone calls can remain private. Also, the bathroom is out of camera range. And, of course, guests can turn out the lights. "Our hotel is on the cheaper side," Inoue said, "so we need some added value, something special that everyone will talk about."

Crime Report
When Martin Skelly, 41, was arrested on Nov. 16 in a Clearwater, Fla., McDonald's for possession of methamphetamines, he told officers he did not have any other contraband. But during his intake at the Pinellas County Jail, a deputy found a "small bag of crystal powder substance wedged deep within [his] belly button cavity," Fox News reported, which later tested positive for meth. Skelly, who is 5-foot-9 and weighs 380 pounds, received two additional charges for introducing contraband into a correctional facility and narcotics possession.

People Different From Us
Bodybuilder Kirill Tereshin, 23, a former Russian soldier also known as Popeye, underwent surgery in Moscow in mid-November after doctors told him that the petroleum jelly he had been injecting into his biceps to increase their size might result in the amputation of his arms. Surgeon Dmitry Melnikov told Metro News: "The problem is that this is petroleum jelly. [Tereshin] injected this so thoroughly that it spread in the muscle and killed it." In this first of four surgeries, doctors removed 3 pounds of dead muscle and 3 liters of jelly that had formed into a solid lump. The injections were causing Tereshin high fevers, pain and weakness. Following the operations, doctors have told Tereshin, he will have arm movement but his arm muscles will be diminished.

Awesome!
Over the past five years, 12 separate bundles of cash, totaling nearly $45,000, have turned up on sidewalks in the quiet, beachside English village of Blackhall Colliery, posing a mystery for local Detective Constable John Forster. "These bundles are always ... discovered by random members of the public who have handed them in," Forster told 9News, although he did admit he suspects some bundles have not been turned over to police. Officials have no evidence of a crime committed related to the bundles, usually containing about 2,000 pounds apiece. After a period of time, if no one claims them, the folks who discovered the bundles will get to keep them.

Compelling Explanation
Police and firefighters in Liberty, Ohio, were called to the Liberty Walmart on the afternoon of Nov. 16 to find a car on fire in the parking lot, reported WFMJ. Owner Stephanie Carlson, 40, told them there was a can of gas in the trunk and she had lighted a candle to get rid of the smell, but she later admitted she had poured gas on the seats and started the fire with a lighter because the car was dirty and there was a problem with the front wheel. The car belonged to her husband, who said he had been looking for her all day, and also told officers she had allegedly been found huffing mothballs and paint thinner recently. Police took her into custody and found a lighter and mothballs in her purse; she was charged with arson, inducing panic and criminal damaging.

Suspicions Confirmed
After the death of their uncle, Sifiso Justice Mhlongo, in the KwaZulu-Natal province of South Africa, Thandaza Mtshali and Thobeka Mhlongo ran into trouble trying to settle a claim on his life insurance. According to The Daily Star, Old Mutual required confirmation the man had died and delayed payment because they were waiting for "additional assessments." So on Nov. 19, the women went to the funeral home, retrieved their uncle's body and took it to the company's local office. "They said they had paid the money into our bank account and we wanted to be sure," Mtshali said, "so we left the body at their office and went to check at the bank." When they had their money, they returned the body to the funeral home, and Mr. Mhlongo now rests in a family burial plot. Old Mutual pronounced the incident "most unsettling," and promised a full investigation, but Muzi Hlengwa, spokesman for the National Funeral Practitioners Association of South Africa, said the matter was far from over: "The rituals that were supposed to be done to move the body from one place to another were not done. The soul of that man is still left at the Old Mutual, so they will have to cover the costs of performing these rituals."