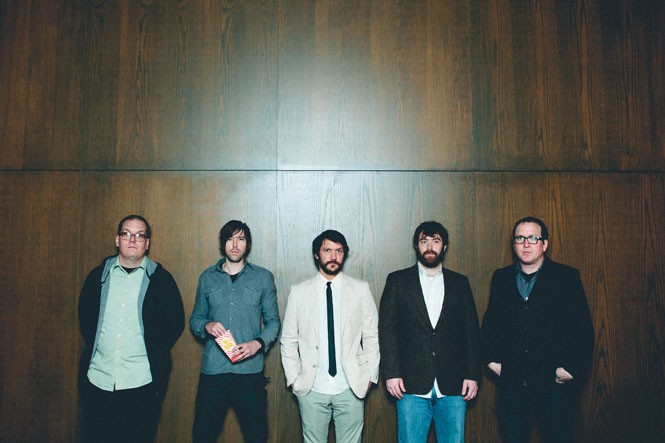 "There's a nostalgic bent to it," says singer/songwriter Tim Kasher of the band Cursive, about his band's upcoming tour in support of the deluxe reissue of their landmark album The Ugly Organ. Re-released this past November, a dozen or so years after it initially came out, The Ugly Organ is Cursive's most successful album to date, having sold more than 170,000 copies since its release.

Despite missing the nice round 10-year anniversary of The Ugly Organ's initial release, the Omaha, Neb.-based indie-rock band still wanted to do something to commemorate their most popular album. "I think that we had every intention for a 10-year anniversary, but we're still putting out albums, and we were busy promoting our album I Am Gemini when it was time for the 10-year," Kasher says. Rather than marking some arbitrary milestone with the release, he likes to think of the reissue and coinciding tour as "just celebrating a successful record."

Originally released in March 2003, The Ugly Organ was a record that helped Cursive rise from relative indie-level obscurity to become one of the top-selling bands on the Saddle Creek record label, earning its place next to much-loved bands like Bright Eyes, The Faint and Rilo Kiley. The success of the album reportedly came as a bit of a shock to the members of the band, who were all but certain that this weird, self-indulgent, meta-concept record would flop.

The Ugly Organ uniquely mixed the soft timbre of a cello with dissonant and angular guitar playing, and is almost completely without what you might call a chorus. This abrasive and unusual combination—along with Kasher's confessional, occasionally off-putting and self-deprecating lyrics ("So rub it in, with your dumb lyrics/ Yeah that's the time and place to wring out your bullshit/ And each album I'll get shit on a little more/ Who's Tim's latest whore?")—really resonated with those of us in our awkward teenage years at the time. Just ask a few of your friends who were in high school when The Ugly Organ came out—I'm sure more than a few will probably tell you it was one of their favorite records.

Salt Lake City is somewhat of a special place as far as The Ugly Organ is concerned. In 2002, Cursive was on tour with Eastern Youth promoting their 8 Teeth to Eat You split EP—which included four songs that appear on the second disc of the reissue—when Kasher suffered a collapsed lung and was forced to spend a few weeks recovering in Salt Lake City after having surgery at LDS Hospital. This unexpected downtime came shortly before the band was to begin recording and allowed Kasher time to work on some of the songs that eventually ended up on the record. "It's a relevant city for the record," he says. "But beyond that, Salt Lake has always been good to us; back when we started playing at Kilby Court, it was one of the first cities in the country that really took us in."

The period surrounding the release of The Ugly Organ, both before and after, was an especially fertile one for Cursive, and saw the band releasing what many fans would consider their best work. In keeping with that idea, the majority of the songs they're going to play on the tour will come from that period of around 12 years ago. In order to fully do justice to that material, Cursive have recruited a cello player to fill out the lineup and re-create the parts that their original cellist, Gretta Cohn, played before she left the band in 2005.

Since this tour is more about nostalgia and celebrating Cursive's past work than it is about promoting a new release, the band is putting effort into re-creating the older songs as they were played when first recorded. "As a musician and songwriter, I really think it's totally healthy and natural for a song to evolve, especially if you've been playing it for 10 years," Kasher says. "That said, that can be counter to how a lot of people feel, and especially with a tour like this, people don't tend to like it when you change the way you sing or play a song; they want to hear something that is a closer replica to the album."

"It's really their album," Kasher says. "They're the ones who have been listening to it."