A look at what the 2019-20 season has in store on local theater stages. 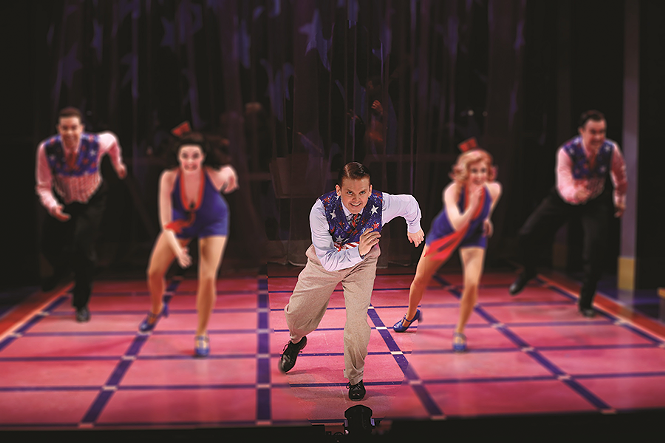 With Labor Day in the rearview mirror, it's time to face facts: Summer is almost over. But along with a change in the weather comes a change in the arts offerings, as local performing arts companies beckon prospective audience members indoors for their new seasons. Here's a roundup of what some of Utah's major theater organizations are serving up, from the latest brand-new locally-created plays to award-winning musicals from the Broadway stage.

Pioneer Theatre Co.: Salt Lake gets the honor of a pre-Broadway premiere when the new biographical musical Cagney (Sept. 20-Oct. 5) comes to town with co-songwriter/star Robert Creighton. The controversy over "fake news" gets a dramatic going-over in The Lifespan of a Fact (Nov. 1-16). The holiday season brings the hilarious meta-murder-mystery The Play That Goes Wrong (Dec. 6-21). Mary Stuart (Jan. 10-25) chronicles the conflict between two possible queens of England, followed by the beloved Lynn Ahrens/Stephen Flaherty musical Once On This Island (Feb. 21-March 6) and a portrait of the artist as badly-behaved man in Ass (March 27-April 11). The season wraps up with a musical about Elizabethan playwrights attempting to write the very first musical in Something Rotten! (May 8-23). pioneertheatre.org

Broadway at the Eccles: Touring productions coming to the Eccles Theater kick off with the often-controversial Vietnam-era adaptation of Madama Butterfly in Miss Saigon (Oct. 15-20). The classic tale of a little boy and his love for a Red Ryder BB gun lights up the holidays with A Christmas Story: The Musical (Dec. 3-8). Tevye and his love for tradition is celebrated again in Fiddler on the Roof (Jan. 21-26). The 2017 Tony Award-winning Best Musical Dear Evan Hansen, from the songwriting team behind La La Land, arrives March 4-14. A spectacular stage version of Disney's hit musical Frozen follows April 15-May 3, and another family-friendly stage version of an animated film with Anastasia (June 9-14). broadwayattheeccles.com

Salt Lake Acting Co.: An American engineer and her Kenyan driver begin a friendship complicated by political turmoil in Death of a Driver (Sept. 11-Oct. 20; see p. 16). A 12-year-old girl's coming of age mixes with dangerous and magical stories in Form of a Girl Unknown (Oct. 16-Nov. 17). The company's annual kid-friendly holiday production features a musical adaptation of the beloved Pete the Cat book series (Dec. 6-30). Lucas Hnath dares to craft a comedic sequel to one of theater's greatest plays in A Doll's House, Part 2 (Feb. 5-March 8). Sarah Ruhl's How to Transcend a Happy Marriage (April 8-May 10) dives into a New Year's Eve dinner party that goes completely off the rails. And, of course, the season concludes with the traditional assault on local conservative sensibilities, Saturday's Voyeur (June 17-Aug. 23). saltlakeactingcompany.org

Pygmalion Theatre Co.: The local company dedicated to women's voices and women's stories goes all-in on its mission with three plays by female playwrights. Utah's own Julie Jensen is showcased in her story of the friendship between two pioneer-era Mormon women in Two-Headed (Nov. 8-23). Sheila Cowley's Flying (Feb. 14-29) tells the tale of a woman returning to "normalcy" after flying military planes during World War II. Body Awareness (May 1-16), by Annie Baker, digs into the lines between "art" and pornography. pygmalionproductions.org