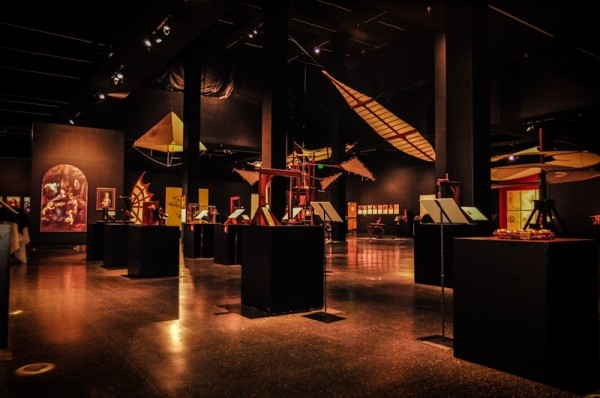 For many people, Leonardo da Vinci represents the stereotypical image of the artist—and not only the artist, but also the “Renaissance man” with knowledge and aptitude in both art and the sciences. A recent examination of his works in both disciplines reveals new facets of his work, and the impact this “genius” has had on art, technology, creativity and the way we view the world.

The current exhibit at The Leonardo, Da Vinci—The Genius, combines more than 200 works, including 75 full-size models of machines he designed, re-creations of his writing in the Codices, and 11 themed areas corresponding to his studies, including flight, physics & mechanics, anatomy, Renaissance art and military engineering. Videos and 3-D animations tell the history of his life and work. Created by Grande Exhibitions, the exhibition has been touring the world for six years, to more than 40 cities.

In his designs for machines, illustrated in numerous drawings, Da Vinci showed that mechanical design can be aesthetically pleasing. Some of the machines built for this show were never constructed during his lifetime. The mockups were constructed by Italian artisans, using many of the same techniques and materials that would have been used during the Renaissance.

The interactive aspect of the exhibit is an unparalleled opportunity for children as well as adults to learn how some of the inventor’s basic machines work. From scuba to submarines, from the first machine gun to a design for a canal system for irrigation, the products of this endlessly inventive mind are on display in a manner that allows them to be experienced in an unprecedented way.

But the climax of the show is in the Secrets of Mona Lisa portion. It presents the insights of French scientific engineer Pascal Cotte, who was allowed by the French government and the Louvre museum to take the painting off the wall and away from its frame and scientifically analyze it with high-tech cameras. The resulting images—displayed at the exhibit on 40 super magnified, high-resolution prints—delineates Cotte’s studies with 25 of his most profound discoveries about the work. Cotte’s patented multispectral camera, capable of 460 million pixels, revealed minute details, including that the woman originally had eyebrows and eyelashes, not visible today, and the famously quizzical smile was originally more pronounced.

“ ‘Mona Lisa’ is well loved because of the mystery surrounding the work,” says Grande Exhibitions exhibit manager Jason Brown. The new revelations provide insight into Da Vinci’s artistic intensity, such as taking 10 years just to paint her lips. The artist carried the painting around with him for 16 years, and the work seemed to take on the quality of a companion to him.

Even though Da Vinci—The Genius doesn’t include any of Da Vinci’s original pieces, the impact of his work is almost more pronounced here, because the viewer can get closer to the pieces in the show than to actual works that would be protected behind glass. Turning the crank on a machine that uses water to create energy is a visceral way of making a connection to one of the greatest minds in history. A replica of the “Mona Lisa” can be viewed from all sides, allowing viewers to muse about details, like a mysterious “H” carved in the wood on the back. And stepping into a booth with eight-sided mirrors, designed to let you view yourself from every side, is a kind of metaphor for Da Vinci’s multi-faceted intelligence.

The show might help to clarify the role of a venue whose purpose has seemed like a bit of a puzzle to local residents. The Leonardo’s executive director, Alexandra Hesse, believes the exhibit’s examination of works by the institution’s namesake will help clarify their mission. “It bridges the gap between art and science,” she says. “Society could revisit some Renaissance values now.”

Brown cites Da Vinci’s line that “art is never finished, only abandoned.” Only 15 to 20 original paintings by Da Vinci are thought to exist. There may be more, though the figure is speculative because he didn’t sign his works. But what Da Vinci considered “abandoned” is still fruitful for us this far in the future, because of the timeless nature of his work and the acute intelligence that offered penetrating insights into so many subjects. The artist showed how so many things are interrelated, from machines to birds in flight, to the beauty of human anatomy, to the mysteries of a smile. Hesse adds, “This exhibit shows the breadth of the topics that Leonardo mastered. It puts the pieces together to see what kind of mind he possessed.”