New reinterpretation of liquor law could put kibosh on Oktoberfest, other events 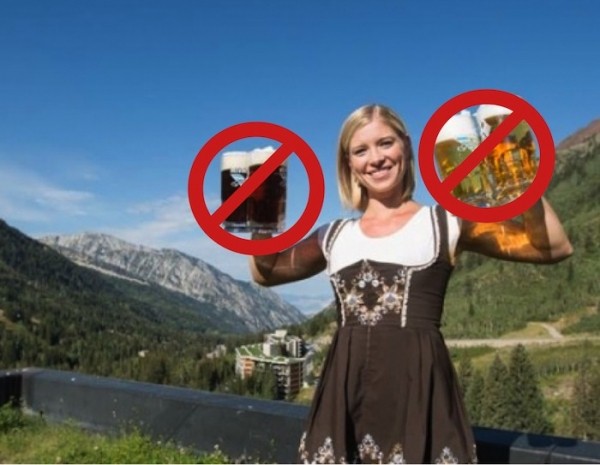 A new standard for granting permits to serve alcohol at special events recently adopted by the Utah Department of Alcoholic Beverage Control could leave Snowbird Resort without a permit to sell liquor and high-point beer at its annual Oktoberfest—meaning that the resort will have to hope that pretzels and sausages will be enough to bring the typical turnout of thousands up to the canyon during the month-long event.

The DABC raised the possibility at its May 27 meeting, explaining that the commission’s new standard for judging requests for a single-event permit is whether the event is a “civic or a community enterprise” that “brings members of a community together for the common good.” Though single-event permit applications currently don’t ask whether an event benefits the public, the commission has begun weighing in favor of charitable events and against those put on by for-profit organizations.

DABC Director Sal Petilos says the commission and department are just making sure that they approve permits in accordance with Utah law and rule.

But the news caused an outcry in the community, and Salt Lake County Mayor Ben McAdams, a former state legislator, says he worries that the DABC is not interpreting Utah law, but reinterpreting it.

“The DABC does not have authority to be setting or changing policy as it relates to liquor,” McAdams says. “What they do have is the power through rule to fine-tune the intent of the Legislature, but to me, this flies in the face of what the Legislature intended when they created the permit.”

According to Rule R81-7, a “civic or community enterprise” is to benefit the “common good,” but the same section also lists “business,” “social” and “recreational” functions as accepted temporary events.

Petilos, however, pointed to another section in the rule allowing the DABC Director “to consider” whether the event “benefits the community” or the hosting entity. This section of the rule, however, says nothing about whether events should or need to benefit the public.

When asked if the rule is vague, Petilos responded: “It is.”

Regardless, Petilos stands by his interpretation, but says that he wants applicants to know the commission will work with them if there is an issue.

“I think these concerns may very well be overblown,” Petilo says. “I also think you have to look at the arc of the decisions the commission has made recently in regards to single-event permits.”

In January, the Maverik Center sought one of the permits, which caused the commission to question what was “special” about the event, since it was requested for the same kind of function that the arena hosts with its on-site beer license.

That application was turned down, but a single-event permit was later granted to Peery’s Egyptian Theater in Ogden since it is a nonprofit organization. Ever since then, requests have been scrutinized for how they provide for the “common good.”

Scott Beck, the CEO of Visit Salt Lake, the Salt Lake Convention and Visitor’s Bureau, says the DABC is being far too restrictive in how it interprets what benefits the public and the “common good.” For-profit organizations, he says, “pay sales tax, payroll taxes and they contribute enormously to our community.”

Petilos also says the commission still examines applications on a case-by-case basis and welcomes for-profit organizations to explain the economic benefits their event could generate.

Petilos says it’s not yet time to bid auf wiedersehn to Oktoberfest. Snowbird has not been denied its permit, nor has it turned in an application, which, he says, leaves the DABC plenty of time to work with the resort.

He points to the example of Homestead restaurant in Midway, which was denied a special-event permit for a Memorial Day weekend crawfish boil. The commission helped it get a temporary beer permit, so at least 3.2 percent beer could be served on the lawn of the restaurant hosting the event.

Beck, however, is exasperated by the mindset of those lawmakers and others “who don’t understand the difference between a specially-brewed Oktoberfest beer, brewed at 6 percent, and a typical Bud Light in a can at 3.2.”

For Beck, it’s the kind of thing that makes or breaks a community celebration like Snowbird’s Oktoberfest.

“What’s most concerning for us is that several of these events that are iconic to who we are as a destination run the risk of not existing,” he says.