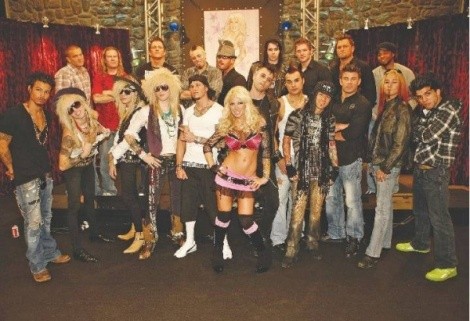 Stunningly, the biggest whore on the upcoming Daisy of Love (VH1; Sunday, April 26) probably isn’t titular star Daisy De La Hoya, the rejected cartoon stripper from Season 2 of Rock of Love With Bret Michaels. Nor is it any of the 20 Axe-soaked himbos vying to lavish their affections and/or DNA upon Miss Daisy.

Hell, it’s not even the producers and executives at Vile Horror 1, who keep recycling these reality-dating shows to the point where we’ll actually be disappointed if they don’t make Spector of Love when ol’ Phil gets out of jail.

No, The Only TV Column That Matters™ is declaring once-upon-a-time Headbangers’ Ball host Riki Rachtman as VH1’s new Alpha ’Ho. He only got his MTV job in the ’90s because he knew Guns N’ Roses’ Axl Rose (he was a rock star, kids), and everything Rachtman has done since then (from Hollywood club owner to NASCAR radio host—yes, NASCAR radio host) has less to do with talent than a limber gag reflex.

The Rachster’s induction to the ’ho new world of Vaginal Hubbub 1 came last year, when he hosted the “reunion” (read: “staged catfight”) special for Rock of Love 2; he then went on to co-host Rock of Love Charm School with Sharon Osbourne, as well as last weekend’s Rock of Love Bus reunion (read: “obviously staged catfight”). Apparently, he’s impressed/serviced someone at VH1 enough to land a sidekick role on Daisy of Love—a Big John to Daisy’s Bret, if you will.

The difference being, despite three seasons of mopping up after Bret’s Rock of Love skank spillage, Big John still has a modicum of dignity. Oh, and a real job in the music business—sure, he’s just body guarding a dwarf in a wigdana (wig bandana) against silicone amazons, but it’s still better than being a basic-cable gameshow host.

But enough about Riki: How promising are the Daisy of Love suitors? Oh my, what a supreme collection of douche-nozzles. VH1’s previous grouping of tribal-tatted man sluts, Tool Academy, was just foreplay; Daisy’s about to be staring down 20 of the most shameless shafts ever to “grace” Vacuous Hysteria 1.

Hearkening back to the original Flavor of Love nickname system, here’s 6 Gauge, 12 Pack (from I Love New York and I Love Money—make up your mind!), Big Rig, Brooklyn, Cable Guy, Cage, Chi Chi, Dropout, Flipper, Fox, London, Professor, Sinister, Tool Box, Torch and Weasel, not to mention a glamtastic set of blond Swedish triplets dubbed 84, 85 and 86. Who came up with the names? Daisy and Riki, the producers would have you believe … because they’re totally that clever. Totally.

The premise of Daisy of Love should be familiar to anyone who’s ever caught even three seconds of any of VH1’s reality humpers on The Soup: Contestants drink up and proclaim their undying lust for show star they’ve never actually met, show star puts contestants through ridiculous/ recycled challenges (Rock of Love was particularly repetitive, going to the same well as often as Bret Michaels whips out “Every Rose Has Its Thorn”), contestants take turns swapping spit with show star, show star tearfully eliminates a contestant every week, contestants fight with each other, show star picks a “winner,” everybody gets together for a reunion show, show star and winner split, rinse and repeat.

How does Vulgar Hubris 1 do it? These genius shows seem to just fall out of their ass every six to eight weeks, which leads me to consider that … brace yourselves … VH1 doesn’t really care about Love. I know! It’s like finding out Daisy’s tits (and lips, and hair, and motivations, etc.) aren’t real! Or that Riki Rachtman makes more money than you …