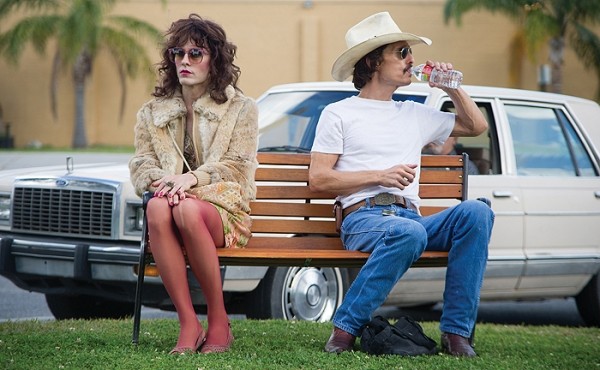 Ron Woodroof (Matthew McConaughey), whose real-life story inspired Dallas Buyers Club, is a rough & tumble Texas oil-rig electrician, small-time hustler and big-time bigot when he learns in 1985 that he has contracted the AIDS virus—which the proud heterosexual considers impossible. Given an initial prognosis of 30 days to live at a time when treatment options were few, Woodroof begins smuggling experimental, not-yet-FDA-approved drugs in from other countries, eventually turning it into a thriving quasi-legal business providing them to other AIDS patients—most of them gay men—with no other options.

So, if there’s one thing we can be sure of, it’s that Woodroof’s experience will result in an awakening of compassion and understanding where once there was hate and ignorance. Come on, we all saw Philadelphia.

That predictable arc is the one thing holding back Dallas Buyers Club, which draws nearly all of its energy from the ferocity of McConaughey’s performance. McConaughey lost plenty of weight to play Woodroof at his sickest, yet he uses the gaunt look to portray the character as someone simply too mean and stubborn to die. His self-absorption and disdain for decorum become the keys to his survival.

Of course, those qualities also provide the conflict in his personal interactions, whether it’s his antagonism with the medical establishment (including Jennifer Garner as his sympathetic doctor) or his business partnership with Rayon (Jared Leto), a transgender woman who helps find Woodroof’s customers. There’s a familiar hostility-to-respect arc between them, and Leto doesn’t always develop Rayon beyond one-note flamboyance. Yet whenever Dallas Buyers Club threatens to wallow in either underdog drama or redemption clichés, McConaughey brings it back down to earth. He takes a movie that might have felt like it’s pleading for awards and turns it into the story of a guy dragged kicking and screaming into human decency.