Life at High Speed: Salt Lake City entrepreneur Dan “The Laptop Man” Young likes music as high-energy as he is. 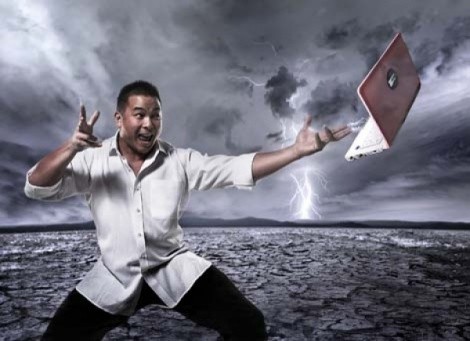 Any time you turn on local television, it seems you’re destined to see a commercial spot from Dan Young, better known across the state as “Dan The Laptop Man.” The ecstatically energetic founder and self-made pitchman for PC Laptops has come a long way from selling systems out of the back of his truck.

The transplanted Californian got his start with technology back in 1977 when he was just 6, attending a computer training camp for underprivileged children. Originally tutored on the old Apple II , learning BASIC before moving to Pascal, Young became fluent in video games to the point where he programmed his own and started practicing early hacking techniques, all before the age of 10.

As a teen, his first entrepreneurial effort found him selling T-shirts and novelty items along the Venice Beach shoreline, but being involved with “the wrong crowd” eventually led to him moving to Utah in 1988. He attended SLCC and the U and found a major that would pay off later for his business model: Family Consumer Studies. It taught him, as he puts it, “how to protect and value the consumer.”

While in school, Young worked several tech-related jobs, but when his last official 9-to-5 gig disappeared when the company went out of business, Young got the idea to ask his former manager for their customer database. He started his own business, and after the first year, he was $20,000 in debt. Soon enough, though, he was on solid financial ground, and he launched Elite Systems in 1992, opening a store in Salt Lake City after two years of working from home.

Young truly hit his stride a few years later when laptops became a necessity for an on-the-go workforce, changing the business name and turning himself into the company face with “zany” commercials.

“It’s a daily cycle of constant, never-ending improvement,” says Young about the business. “Just keep your hands on the steering wheel. Do your best and learn from your boo-boos.”

In 2006, when Totally Awesome Computers was dealing with financial and personnel problems, Young stepped in to employ most of his rival’s staffers and started up a line of desktop systems. This kind of fast action and quick thinking has led to Young’s company being recognized as one of Utah’s most successful and fastest-growing enterprises. Young was honored by SLCC in 2009 as one of its Distinguished Alumni, and has earned spots on advisory boards for Microsoft and Intel.

Home life for Young is a very different, less hectic story. A typical day includes a run on an elliptical trainer, chatting with the family for ideas, frequent visits to his Facebook fan pages for online Q&As, getting together with his team to organize, gaming on his Decimator computer, a sushi break—and then repeat that process again before the day is out.

Besides gaming, four-wheeling, paintball and target-shooting, Dan uses his spare time to go to schools to offer advice to children and lecture businesses owners about the values of social marketing. And he spends plenty of time with his family. “I love spending time talking to my wife and kids about life and what their aspirations in life are. My parents are the greatest in the world. My mom makes insane Chinese dumplings!”

We asked Dan to take a brief moment from his insane schedule to put all his music into one of those light-speed-fast laptops, shuffle them at blazing speeds and see what pops out first.