Dance | Babel On: Forty years after its creation, Tower still resonates with significance. 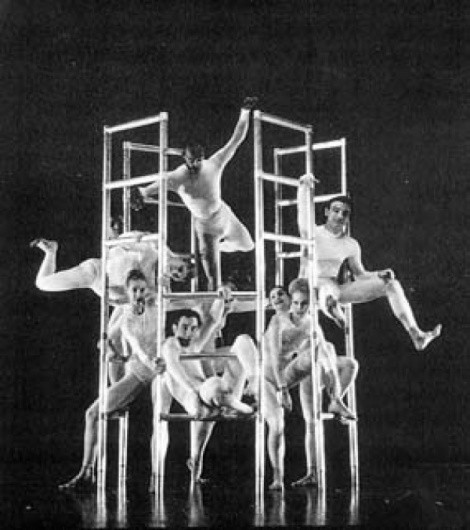 Imagine a world in which a civilization celebrates its grand achievements by constructing a majestic tower. This tower is meant to represent the beauty of the world in total, a nod to the brilliance of global humanity. Now imagine that tower falling, crashing down from the sky with such force that the Earth itself shifts and quakes.

Admittedly there is no way that choreographer Alwin Nikolais could have foreseen an event such as 9/11, a tragedy that is permanently embossed upon our collective psyche. But still, there is something eerily familiar about his 1965 work Tower. With such a powerful image central to the composition, there is no doubt that that a calamitous day in American history will be jarringly evoked as Ririe-Woodbury Dance Company (RWDC) reconstructs this classic piece of dance theatre.

“For me, it is prophetic because, before 9/11, who would have thought that those towers would ever fall?” ponders Joan Woodbury, RWDC co-founder and managing director. “But really, the piece is more about a different kind of tower. This piece has the sense of building this magnificent structure that becomes a modern-day Tower of Babel.”

Throughout the work, each dancer is speaking, ranting and babbling. For the most part, those various utterances remain incoherent, except for the periodic statement, question or command that breaks through all the communal noise, piercing the audience’s individual thought processes. Nikolais was making a statement that we all kind of live our lives alone; we may talk to our neighbors, we may casually engage acquaintances, but half of the time, we don’t even listen to what they say. Nor do we often recognize what we are doing and what profound effect it may have on everything around us.

”I think that’s just it. His point was that everyone is talking at the same time, so no one is listening to each other,” says Woodbury. “It is within that dynamic that they kind of blindly build this incredible tower. At first thought, this tower is this great thing of beauty. It is all so tall and wonderful that they decide to decorate it. Then they decide to throw a grand party inside of it. It is all just too exciting, too amazing.”

But like most cherished achievements within a society, imminent demise is inherently built in. In this piece, the dancers quickly realize that what they have erected is not a thing of beauty, but rather a total monstrosity. It is only then that the eyesore finally implodes upon itself and comes tumbling humbly back down to earth.

Ultimately Nikolais was exploring the loose underpinnings of a modern society that was rapidly abandoning its mores. Originally, the piece included flags that represented a Big Brother looming over a newborn burgeoning global society—acronyms such as IBM and CIA, mega-organizations that were beginning to take control of the world. When it was re-staged back in the 1980s, the acronym flags were tossed out in favor of flags bearing more symbolic messages promoting black power, gay rights, peace, etc.

“I don’t think that he started with the apocalypse in mind when he began constructing the work,” says Woodbury. “Remember, this was back in 1965. But what he was doing was beginning to deal with a more human subject matter in a very abstracted way. He also was dealing with human emotions. He was stepping out on a limb really by using human voices and very human themes.”

So certainly, Nikolais couldn’t have been consciously prophetic; he never claimed to be a choreographing Nostradamus. But what he did do was to create a work perched upon the cusp of all things modern. The fact that a 40-year-old piece of art can ring so contemporarily true is a testament to one man’s creative genius—even when it harkens to something so bone chillingly dark as those two collapsing towers.