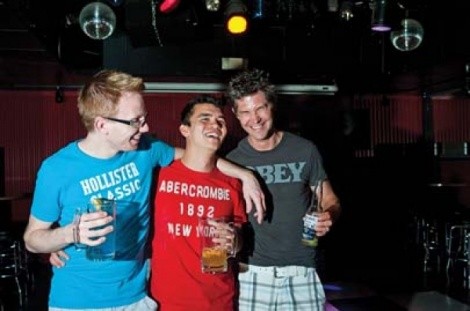 Dance Clubs & Gay Bars
Nothing like a heavy dose of dancing to conjure up a serious thirst, and while SLC’s dance clubs and gay bars might serve plenty of cocktails, beer is on the menu prominently, as well.

31.8 Club Try-Angles
Here’s an angle for ya: The third Saturday of every month at Try-Angles is Underwear Night. That’s fun for everybody. Play in the pool tourney on Wednesdays or dance to DJ BoyToy on Fridays and Saturdays. Adjacent sister-biz Off-Trax Cafe offers food, coffee, an Internet café and serves finger foods on Fridays and Saturdays, after Try-Angles closes. 251 W. 900 South, Salt Lake City, 801-364-3203, ClubTry-Angles.com

39.6 The Trapp
What appears to be the best-looking casa on the block is actually a little gay hole-in-the-wall with a loony side. On the day of our visit, City Weekly found everybody laughing at that viral video where the guy gets chased and mounted by a donkey—and who wouldn’t? It’s funny. Point is, it’s a friendly, mellow place where only the burro-boner-averse will feel out of place. Show up on Sundays for a barbecue that, Trapp staffers say, “is usually pretty huge.” 102 S. 600 West, Salt Lake City, 801-531-8727, TheTrappSLC.com

39.6 Area 51
Area 51? Isn’t that where they stash all the freaks? Sorta, yeah. It’s Salt Lake City’s best-known goth-metal-industrial hangout, so tats, piercings and gauges abound. And “freak” is a term this crowd embraces—even Area 51 staff described their seemingly incongruous karaoke night (Wednesday) as “freak” karaoke. Fittingly, the last Saturday of the month is fetish night. This is also the home of the Dark Arts Festival, a perennially popular local-band showcase. 451 S. 400 West, Salt Lake City, 801-534-0819, Area51SLC.com

39.7 The Bay
Did you know the haunted mansion on Fourth South and West Temple is actually a dance club? Most people do; it’s the O.G. of local booty-shakin’ establishments. Having said that, it’s all dancing and DJs, with Latin, reggae, hip-hop and house music varying with the night and the room. A cool twist is the pool party every Sunday afternoon, weather permitting. A limited food menu is available upon request. 404 S. West Temple, Salt Lake City, 801-471-9034

42.1 Metro Bar
The little big club across from Club Sound/In the Venue, Metro (formerly Club Edge) is a slick dance/live music club. Dance takes center stage, though, as the Metro bills itself as the “ultimate bar, lounge and dance club to hit SLC.” Most every night has a theme: Tuesday is Punk Rock Night, Thursdays are Dance Evolution with DJ/DC and Saturday is gay-friendly Fusion Night. 540 W. 200 South, Salt Lake City, 801-580-2491, Facebook.com/MetroBarSLC

42.4 The Hotel Bar & Nightclub/Club Elevate
Located in a restored Salt Lake City landmark, the Hotel boasts three floors and 32,000 square feet dedicated to your drinking pleasure. With nightly features such as Arcade Night, Ladies’ Night, Latino Night and weekend DJ dance parties, the Hotel has a club for everyone. Need to cool your heels? Head upstairs to the Opium Lounge, where low, comfortable booths and more bartenders await to serve your every need. Not chill enough? The third floor features hookahs and an above-it-all view of the Lounge. And, of course, more bartenders. 155 W. 200 South, Salt Lake City, 801-478-4310, TheHotelElevate.com

Next: East of Downtown/University District