Dangerous, The Shadow Prince, The Haven 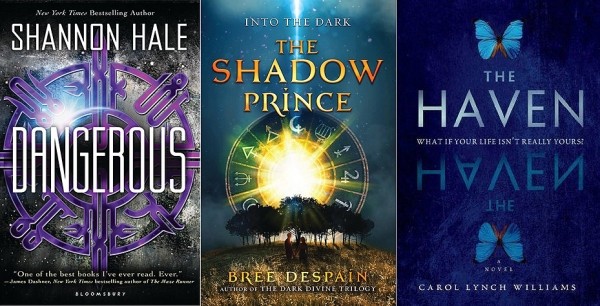 Maybe it shouldn’t matter that Shannon Hale’s new novel is a young-adult super-hero adventure whose protagonist is female, non-white and disabled. How lovely it would be to live in a world of faeries and unicorns where stories in this genre that were not focused around white boys just grew on trees.

There’s no question that Dangerous gains an added pop from a protagonist who’s coming at life-or-death scenarios from the unique perspective of someone whose self-talk might be that she can’t be the hero. There’s a dose of Fantastic Four to the set-up that finds 16-year-old Maisie Danger Brown—half-Latina, and missing her right arm as a result of in utero issues—attending a space camp, and, along with four other adolescents, gaining strange abilities when they make contact with an alien technology housed at an asteroid-based space station. And yes, those abilities may be needed to save the world.

Hale packs Dangerous full of plotting: a romantic triangle, shifting allegiances, extraterrestrial invasion, life-threatening action and an impressive amount of time devoted to the science and physiology of her protagonists’ super-powers. Indeed, it’s almost too densely packed, spinning Maisie through so many shifts in her situation and whom she thinks she can trust that it’s not always easy to keep up with where her head is at any given moment.

Yet Dangerous avoids getting too bogged down in its plot by delivering regular high-energy action beats, and by providing vivid characterizations, including the space-camp’s genius operator whose fascinating brand of self-interest makes her too slippery to peg as ally or adversary for Maisie.

Meanwhile, Maisie herself anchors the story with an appealing mix of simple adolescent insecurity, smarts and determination. It’s thrilling to find a satisfying page-turner of this kind at all, let alone one that risks giving a heroic voice to someone who doesn’t look like any other hero you’re likely to find.

THE SHADOW PRINCE
By Bree Despain
Here’s why it’s not prudent to make sweeping statements like, “Really? Another supernatural teen romance?”: You might wind up missing something like this terrific adventure.

Bree Despain’s Dark Divine trilogy was a perfectly satisfactory entry in the popular young-adult sub-genre, but to use a sports metaphor, she’s “made the leap” with The Shadow Prince. Grounded in the Orpheus and Persephone myths, it follows a prince of the underworld named Haden who is called to take on a regular task in his world: visiting the human realm to bring back a young woman to serve as queen. But his target—16-year-old Daphne, the daughter of a celebrated rock star—may be more important than all those who came before, offering the disgraced Haden an opportunity to reclaim his place as heir to the kingdom.

It’s not a particularly complex plot conflict—Haden has six months to convince Daphne to return to the underworld with him, of her own free will—but Despain fleshes it out with phenomenally rich world-building. The details of the Underrealm—its hierarchies, its history, even its petty in-fighting—provide fantastic depth for Haden’s quest, with the familiar mythological stories interwoven gracefully enough to provide a familiar foundation.

Beyond the unique universe she creates for the characters, however, are the characters themselves. It’s impressive enough that both Haden and Daphne are more emotionally complex than you have any reason to expect from most genre fare. But The Shadow Prince is filled with supporting characters nearly as vital as our heroes; it feels like every one of them could support a separate side novel.

All too often, the inevitability of a young-adult novel becoming a series feels like a threat rather than a promise. But when The Shadow Prince reaches its conclusion—with cliffhangers stacked upon cliffhangers—it’s more like you’ve been visiting a world too full to be contained by this one story.

THE HAVEN
By Carol Lynch Williams
Just a little tip from me to America’s publishing-industry publicists: If you’re going to describe a novel as one that “will resonate with fans of Never Let Me Go,” that shouldn’t be code for “it’s the exact same story as Never Let Me Go.”

Because that’s basically what Carol Lynch Williams has done here—transferring the identical premise of Kazuo Ishiguro’s 2005 novel to a young-adult framework. And to avoid spoilers for those unfamiliar with Ishiguro’s book, let’s just say it involves young people at an isolated boarding school whose purpose is somewhat unique.

Williams has crafted some terrific contemporary young-adult fiction (Miles from Ordinary), and it’s not as though she completely butchers this concept. It’s simply impossible to get past the page-to-page awareness that she’s taking it in a far less interesting direction—favoring suspenseful action over Ishiguro’s mournfully elegiac tone, and spelling out all of the premise’s subtext in the conflicted internal voice of Williams’ protagonist, Shiloh. Perhaps it can serve as an appetizer for teen readers, showing them there are better and worse ways to tell the same story.