Can music make you smarter? 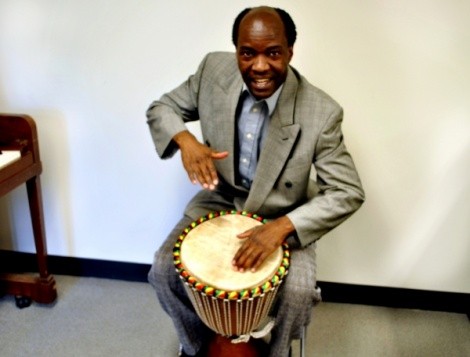 David Akombo is a professor of music education and world music at Weber State University who serves on the executive board of the Interdisciplinary Society for Quantitative Research in Music and Medicine (Weber.edu/ISQRMM). ISQRMM will have its first “Music and Medicine” conference June 2-3 at WSU, discussing the positive effects of music on the human body, soul and mind.

Music and medicine, what’s the relationship?
There is already some data to show that music affects the human body in a positive way. That has not been fully explored, but some kinds of music can lower blood pressure, lower heart rate, can stabilize the human body through homeostasis. We have some answers, but we don’t have enough answers.

There’s still more to do. I want data. I even want scholars to come out and prove me wrong if they have the data, and say, “No, music doesn’t have a positive effect on human beings. We are spoiling our kids with music. Eliminate music from K-12. It’s bad. It’s making our kids not score highly. It’s making our kids endangered. That’s why there are riots in schools and kids are carrying guns. Maybe that’s why their anxieties are high—because they are listening to Lady Gaga all the time.”


Does music make you smarter?
That’s the million-dollar question. What kind of music, and how long? Does it matter where the music is from? Does the background of the person listening to the music matter? Will Mozart’s music have an effect on a child in Zimbabwe? Or a West African chant song an effect on a kid in Salt Lake City? Is it the sound, or is it the quality of the sound itself, or is it the cultural phenomena? Maybe there are parts of the body that require different types of music—maybe every human being needs a little bit of classical, a little bit of drumming, a little bit of Australian aborigines, a little bit of singing, a little bit of chanting. Maybe some are better than other types of genres. But we want all this backed up with scientific research, which will give it some credibility, instead of just saying, “Music makes you smarter.”

Is there “good” and “bad” music?
Not all music is good. Some music is not good, but I don’t want to just say that some music is not good—it has to be backed up with data. You can’t just wake up and say, “Rap is bad.” How is it bad? We want quantitative data. Most people would be listening to good music—and “good” is broadly defined. Good music to one person may not necessarily be good music to another person. Music that brings positive emotions to one person maybe be completely devastating to another person because we call them extramusical associations. Consider a divorce situation, for example. Your ex-wife listened to that kind of music all the time, and you have so many bad memories of that marriage. Every time you listen to that kind of music, it brings up the bad memories, and you don’t want to go there. People tend to avoid that kind of music, or that genre completely, because they are trying to avoid the pain.

What led you to this research?
This was part of my Ph.D. dissertation research, the effects of music on the human body. When I see kids on campus, 97 percent of kids have iPods, and I’m always curious: What are they listening to? How long do they listen to that music, and at what decibel level do they listen to that music? How does it affect them, if at all, in any way—positive or negative? I haven’t gotten answers yet, and that’s why I want this society to champion that scholarship and bring to the light the effects of music, both positive and negative, to every human being who listens to music.

Does music have the power to alter your state of mind?
That’s speculation. I have studied music from both an anthropological and quantitative perspective and also from a qualitative perspective (which touches on anthropology). I have seen people go into a trance using sonic energy, which includes music. But I have just observed. I have not tested, and I have not quantified whether it’s music that really sent them into a trance or whether they were pre-exposed to some other psychological conditions and music simply was a catalyst to their condition. I think it’s very important for the present-day biomedical researches to find out if that’s a positive thing. If they go into a trance to eliminate some other ailments that otherwise would be very catastrophic to the being, then why not? They should encourage people to listen to music that sends them into a trance if that’s a positive thing.