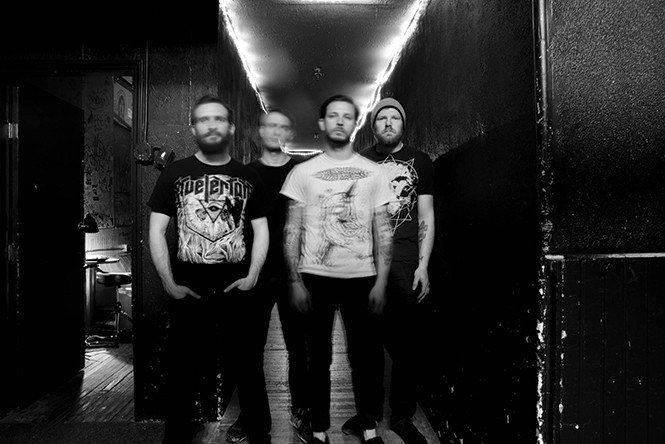 Cult Leader drummer Casey Hansen is awakened by the phone. "No," he doesn't need time to get his thoughts together. "Uh—I feel good," he laughs.

Perhaps a softball question to let him warm up would be a good idea. Or we can jump right in and ask if there were any particular reason Cult Leader recorded Mark Kozelek & Desertshore's "You Are Not My Blood" for their EP, Useless Animal. You know, the song where Kozelek—or, in Cult Leader's version, singer Anthony Lucero—tells someone, in crystalline terms, that they're not kin; they're not friends; they're not even of the same species and they should piss off to a richly deserved living hell ending in a lonely death. Kozelek must have had someone in mind when he wrote the tune. But, did Cult Leader?

"Interesting question," says Hansen through the morning haze. He knows that I, in fact, have someone in mind. As for the band? "Not explicitly. ... But anytime there's bitterness to be expressed in a one-on-one scenario, there's always something running in the back of, at least, my mind. But yeah, it's just a great song."

It certainly is. The seven-minute tune plods along as minor-chord arpeggios ring out beneath the bilious lyrics, which are talk-sung, as though this droning kiss-off were an incantation, a dispassionate banishment. Reading the lyrics is enough to reveal that their author or their utterer means what he says. The words aren't fueled by raw hatred—their power comes from the lack of emotion in Kozelek's and Lucero's deliveries, thrumming with finality.

Someone in Cult Leader's world may warrant what is, ostensibly, this open letter. It warrants mention, however, that Cult Leader is now two years old. They have two EPs and one full-length, the newly issued Lightless Walk (Deathwish, Inc.), under their belts. They deserve distance from their previous incarnation, Gaza, and the rape allegations against singer Jon Parkin that leveled a band in its prime. Parkin and his accuser have since agreed to disagree and move on. Maybe some sorcery exists that can banish memories as well as people.

If there is intent behind Cult Leader's choice of the song, it must be an expression of something wholly different. It's slower and more atmospheric than Cult Leader's typical crusty punk-metal blitzkrieg. You can actually understand the lyrics, and Lucero, for the first time, explores pitched singing. "Style in music ... doesn't have to be one-size-fits-all," says Hansen. "You can express the same types of things in all sorts of ways. Aggressive music—punk, metal, hardcore—all comes from the same place, so why not use all of them together as a means of expressing yourself?"

Cult Leader said back when their debut LP, Nothing for Us Here, came out in 2014 they were abandoning the humor—and political and anti-religious commentary—of Gaza in favor of more introspective, personal themes. "It's almost as if the words don't matter; [often] you can't even hear 'em, because there's so much going on." Hansen says. "I've not known what [some of our] songs are about for years."

On Lightless Walk, the politics and religion still factor in, but they're filtered through Lucero's dark stroll through halls crowded with personal demons. On album opener "Great I Am," Lucero ponders that hell is not only his own, it is himself. "A Good Life," Walk's closest cousin to "You Are Not My Blood," concerns one stumbling through a wretched, frozen existence, rejected by even his mother. It could be a reverse angle on "Blood," or simply Lucero's own expression.

But feeling alienated is universal, and Lucero's words aren't so murky that we can't apply them to our own lives and find catharsis in them. Just like Kozelek fans—or Smiths or Cure or blues fans—do with that music. And the purge leaves us feeling awake and purged and, ultimately, good.