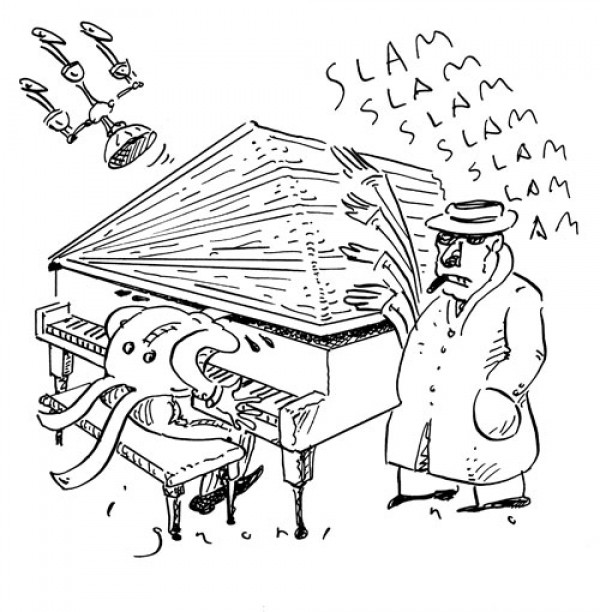 Pianos are quite deadly. See attached. The 1887 article is what your reader [of April 12] was looking for, I think. —Bill Mullins, Huntsville, Ala.

Every so often in this business, you have one of those weeks.

Reader Mullins sent us three e-mails, devoted respectively to newspaper reports of fatalities due to falling pianos, anvils and safes. The one about pianos contained 26 items dating from 1887 to 1989. Scanning the list for the referenced account, we found the following from the Jackson [Michigan] Citizen of January 11, 1887:

“A young man named George Snyder was instantly killed at Grand Rapids Monday. He was employed at Chase Bros’ [sic] piano manufactory, and as he was passing out of the factory on his way to dinner, a piano which was suspended by a windlass fell on him, crushing his chest and skull and causing instant death.”

Other than its lacking any mention of the Acme Company, this was undeniably the classic cartoon trope. I sent a quizzical note to the research department, namely Una and Fierra.

“We worked hard on this one,” they wailed. “We searched everything. This is mortifying. We’re going to go outside and hope a piano falls on us.”

Don’t despair, I said. A simple flogging will be sufficient. Then I looked at reader Mullins’s e-mail address, which ended in “.mil.” I wondered: Was he tapping into top-secret military databases in underground bunkers? It would hardly do to blame Una and Fierra if they’d been outsearched by someone with access to the resources of the National Security Agency.

Nope, replied Mullins, I’m a civilian engineer working for the military. We didn’t ask him what he did, but seeing as Huntsville is home to several U.S. space and missile facilities, we assume it involves rockets and stuff. In any case, he had used the GenealogyBank newspaper archive, which claims to contain a billion-plus articles published in the United States between 1690 and 2010. Accessing the archive required no security clearance. It did, however, require a credit card.

That’s outrageous, I said. Information wants to be free! Except, I conceded, when we packaged it in book form for sale at $10.95 a pop. On further consideration, I decided that the Straight Dope Research & Entertainment Fund, consisting of contributions from readers (and which is now a bit depleted, I might add), would in the future have to be devoted more to research and less to entertainment.

Back to our subject. Thanks to reader Mullins, we may now add the following datapoints to the sum of human knowledge:

Twenty-six piano deaths throughout the entire United States over more than a hundred years may not qualify as common, but they’re not rare either, contrary to our earlier claim.

What is rare is a piano falling from overhead, as large, heavy objects routinely do in the canyon country frequented by the Road Runner. Except for the Grand Rapids case, all reported instances involved a piano toppling over, falling off a truck or cart, sliding down stairs, or some similar mundane scenario.

Except for maybe this one: In Baltimore in 1905, Grant Bowman and several other men were in a wagon carrying a piano down a hilly street when a runaway streetcar plowed into them, knocking the piano into the roadway with the men evidently underneath it. Bowman was killed and the others were injured. Minimal detail was provided on the streetcar, but I’ll bet it came from Acme.

Now to safes. Mullins has turned up just seven cases, but in three, the safe fell from above, the purest example from a literary standpoint being the following from the 1943 New York Post: “An express company helper, Frank Draskovitz ... was crushed when the rope by which [a] safe was being lowered from a second-floor window ... broke.”

Finally, anvils. Mullins has provided six articles, of which three are of particular interest. A 1911 account from Syracuse, N.Y., reports that one John Vandusen suffered injuries expected to be fatal when someone dropped a 200-pound anvil on him from a landing above—a Wile E. Coyote-esque fate in my book.

More puzzling are the other two. Here’s the complete text of a November 1896 report filed from Middlesboro, Ky.: “In celebrating McKinley’s victory at Clintwood, Va., an anvil exploded, killing Pollam Colley and Preston Mullins [no relation, presumably] and frightfully injuring three other men.” One thinks: The anvil exploded? Next, a piece datelined Luling, Texas, November 12, 1884, which begins: “Yesterday afternoon the Democratic celebration over the election was turned to sorrow by the bursting of one of the anvils used. The force of the explosion showered particles of steel in all directions,” killing two men in a nearby saloon. Details of how celebration might cause an anvil to explode remain elusive; we can only suppose that the inexplicable pastime known as anvil shooting, described in our original column, goes back further than we thought.