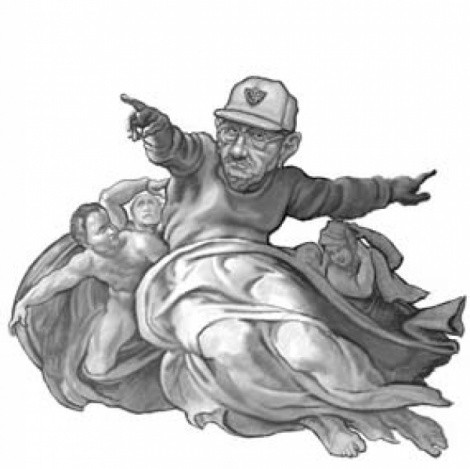 In what is considered a turning point in the affairs of heaven and earth, God has transferred power to his younger brother, Herb. Speculation is rampant as to how things will change with a new ruler of the universe. Some suggest that Herb might not be up to the job after years of playing second fiddle to his autocratic older brother. Still others say that Herb, known to be a down-to-earth kind of guy, wants to eschew media attention. “Herb doesn’t go in for the grandstanding and spectacular stunts that God is so famous for,” says a heavenly personage who is an acquaintance of both beings.

Only City Weekly has been successful in making contact with the successor to the throne of heaven. Through a lot of legwork and a fair amount of back-channel arm-twisting, we were able to submit a list of questions via e-mail, to which Herb responded almost immediately. Though Herb is comfortable with conversational English, he grew up speaking Spanish, so we have taken the liberty of correcting obvious errors in the transcript.

City Weekly: You are no doubt aware that critics say your brother has ruled the universe with an iron fist, much in the manner of Latin American dictators. Do you get mad when you and God are compared, for instance, to Raul and Fidel Castro?

Herb: Not at all, in actuality. It is flattery for me. As you may have observed, my brother bears a striking resemblance to El Grande Hombre, as close amigos with affection call God. But I consider myself to be a much better-looking gentleman than Raul Castro.

City Weekly: Is God really stepping down, or will he continue to rule the heavens and earth behind the scenes?

Herb: He has in totality transferred his powers of omnipotence and omniscience to me. Mortals who pray to him instead of me are plumb out of luck, as they say in French. But God thought he could still keep his fingers in the cheese (los dedos en el queso), as we say in my language. What I say? Hard cheese, as they say in England, on him! He is text messaging me around the clock and is furthermore leaving me Post-it Notes all over the celestial palace. But I just ignore him.

City Weekly: Speaking of cheesy fingers, it is well known that God was a notorious micro-manager. Will you adopt a different managerial style?

Herb: God’s nickname among the staff was The Meddler. He could never leave well enough alone. My style is a little more chill and lay-back. I have no problem to delegate. I wait until someone really screws up before I give him or her the bota or, as you say in Utah, the galosh.

City Weekly: Are you saying you would have kept someone like Lucifer hanging around the halls of heaven instead of kicking him and his gang head-over-heels into hell?

Herb: It is probable that I would have given him a do-over, or a mulligan, as you say. Look at all the damage my nephew has caused, just to get even with God! He has paid him back in spades, in my opinion.

City Weekly: What about your other nephew, Jesus? We understand he’s a little steamed about being passed over for the top job.

Herb: The boss’ son always feels stiffed when Pop picks someone else to take over. To tell you the truth, I think God got tired of all the attention Jesus has gotten over the millennia. People don’t realize Jesus is relatively young for the job—what is he now, around 2,000 years or so? But, God and I go way back. I’ve always been loyal, biding my time, doing all the dirty work. Jesus kind of rests on his laurels and basks in all the worship that comes his way. He even has religions named for him, for Christ’s sake!

City Weekly: Finally, do you have any predictions for the future? How long do you think you will hold on to power?

Herb: It’s my job for as long as I want it. Let me tell you a secret. We—and I’m talking about God and Jesus and all the cherubs and angels and powers and dominions—all of us exist because you human beings invented us. We are products of your fears and superstitions. So, given human nature, we’ll be around forever—however long that lasts.