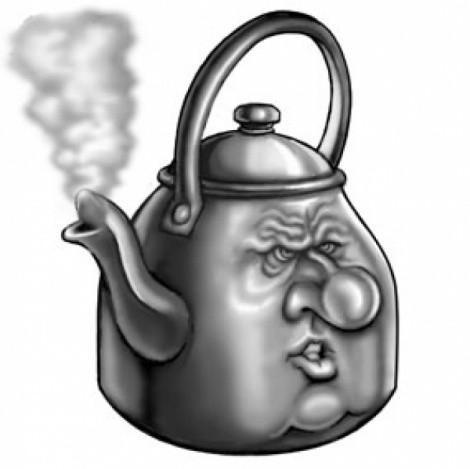 Back when Bill Clinton was running for president, a clandestine team of campaign aides was assigned the task of stopping the so-called Bimbo Eruptions—females coming forward from the chucklehead’s past with embarrassing tales of one-night stands, clumsy propositions, startling ass-grabbing or creepy invitations to pay homage to his oddly shaped expando-stick.

Now that Bill’s wife is embarked on her own noble quest for the White House, a secret team has been tasked with managing Clintonian eruptions of a different color: temper tantrums of Bill affectionately referred to as “red rages,” “purple fits” or “ape-shit apoplexies.” His face reddens, his neck bulges, his jaw juts, his eyes narrow, his finger wags, his saliva spumes.

When Bill was the Prez, no one could prevent these eruptions, as we all well know from having witnessed in living color his furious denial of having had sexual relations with that woman, Ms. Lewinsky. Now, however, Mrs. Clinton is afraid the Billbo Eruptions will so stain her campaign that she will be left all dressed up in her sensible pantsuit with nowhere to go. Already there has been damage: Just last week, spectators thrilled to the spectacle of Bill getting red in the face, narrowing his eyes (nearly detaching his retina in the process), and dismissing Barack Obama’s opposition to the war in Iraq as a “fairy tale.”

“Give me a break,” Hillary’s husband sneered, his face turning redder than a baboon’s bottom. He reprised his rage a few days later when a reporter asked an innocent question about a Nevada judge ruling against Team Hillary’s attempts to keep caucuses out of casinos, where, presumably, Obama, supported by the culinary workers, would have an advantage. Once again, spittle flew and furious blood engorged and empurpled the face of the outraged husband.

What happened next has become the latest YouTube sensation: Right in the middle of the former president’s tirade, just as it appears that his tumescent noggin is about to explode, a figure wearing goggles and a orange hazmat suit and wielding a shiny fire extinguisher bursts upon the scene and douses Mr. Clinton with a foamy flame retardant.

Contacted by phone a few hours later, the man in the hazmat suit, who for security reasons preferred to keep his identity a secret, reported that if he hadn’t acted when he did, the former president would have erupted in flames, causing damage not just to himself, but to onlookers as well.

“You probably couldn’t see it in the video, but Mr. Clinton was starting to emit steam through the cranial orifices, or, in layman’s terms, his nostrils and ears,” said the hazmat man. “Even more alarming to me, and I’m paid to notice such things, were the capillary microbursts occurring on and in the vicinity of Mr. Clinton’s nose. Whenever I see his nose start to swell, I say to myself, ‘Hello, microbursting capillaries on the way.’ Sometimes it’s just a slow burn and his nose swells and throbs and we can treat it with ice packs. But, when the dickhead experiences swelling and throbbing lasting longer than four hours we have to seek medical attention.

“But these latest eruptions are a nose of a different color. In fact, it’s not just his nose but pretty much his whole body that gets all red and swollen up. He experiences tumescence on a rather large scale. Lucky for us, he’s been campaigning out in Iowa and up in New Hampshire, so when he goes into one of his purple fits and is on the verge of bursting, we can grab him and roll him in the snow. He calms down pretty quick after that.

“I’ll tell you what we’re worried about. Once we get into some of these Southern states and the weather warms up a bit, and especially as we get into the summer, we’re going to be hard-pressed to keep the big fella cool. Personally, and this is between you and me, I think he needs some other outlets for all those bodily fluids pent up inside him. If you ask me, I think at this point Mrs. Clinton would be happy to get him out of her hair. He’s such a pain in the neck that Team Hillary would trade the Billbo Eruptions of today for the Bimbo Eruptions of yesterday.”

In other news, Mrs. Clinton continues her winning formula of smear, indignant innocence, accusation of distortion, grudging admission that the smear was “inappropriate,” followed by insincere apology after successful completion of smear.