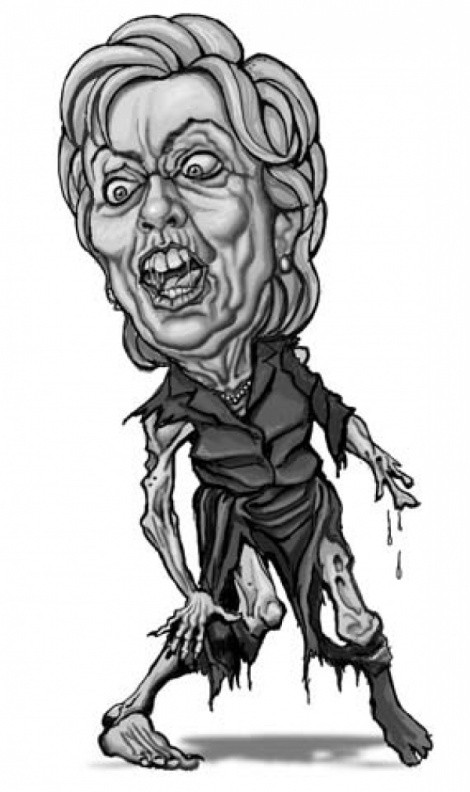 Once again, displaying her never-say-die spirit, a plucky Hillary Clinton, wearing her trademark flack jacket and steel helmet, announced yesterday that she will, if necessary, carry on her battle to become president from “beyond the grave.”

Describing herself as “seriously sleep-deprived, but not necessarily mentally unhinged,” the spunky candidate addressed the ever-increasing calls for her to demonstrate some class and abandon her futile and destructive efforts to win the Democratic nomination.

“Well, you know, these pundits have been declaring me dead for some time now, and, you know, what they don’t realize is that I’m, you know, one of those zombie gals whom you just can’t kill.

“By the way, you all must have noticed by now how I punctuate all my public remarks with the phrase, ‘you know.’ Specialists in the field of psycholinguistics have claimed that I say you know whenever I’m about to tell another of my lies, like the absolute whopper of a tall tale of me dodging sniper fire in Bosnia, but, you know, you can’t always trust video, even if it shows me and Chelsea hanging around with schoolgirls on the tarmac instead of, you know, ducking to avoid incoming ballistic missiles. As my low-life husband might say, it depends on what the meaning of the word ‘sniper’ is.”

Clinton’s reference to herself as a zombie gal already has experts on post-death existence speculating on the situation of the former first lady.

“I don’t think Mrs. Clinton meant to say that she was literally a zombie,” said Dr. Dale Doornail, who has lectured extensively on the living dead. “I realize she called herself, quote, ‘one of those zombie gals,’ but she seems to be speaking metaphorically. It would have been easier for us to decipher her meaning had she used a simile and said, ‘like one of those zombie gals.’

“Nevertheless,” continued Dr. Doornail, “it seems pretty clear to me that she is still alive, not in terms of being a viable candidate, but in terms of being medically alive as a human being, despite the fact that, due to the rigors of the campaign, a few unkind observers have quipped that she looks like ‘death warmed over.’”

Scientists who study the spiritual side of post-death existence say Clinton’s vow to fight for the nomination from “beyond the grave,” has several interesting implications.

“I take her at her word,” said Carlos Bernier, the world-renown Argentine psychic. “Mrs. Clinton looks to me like one of those people who, for whatever reason, do not go gentle into that good night. Now, her body will suffer the usual indignities of death, but her spirit will not be satisfied to flit around on the other side of the veil with the other celestial critters. Nor will she gladly make harmless mischief in earthly environs like Casper the Friendly Ghost.

“No, Hillary is fueled by a vitriol so deep in her being that she will haunt all the precincts of her former life, especially the White House, which she thinks is her personal property. If I were any of the multitudes of former Clinton friends and associates who have gone over to Obama, I would watch my back. Bill Richardson better shave his beard or else Hillary will come from the grave to yank him to an untimely death. Same goes for Senator Leahy and Governor Casey and Senator Dodd, even though they are beardless.

“Why do you think Al Gore is lying low? He was totally Hillary-whipped when he was vice president and so he knows if he comes out and endorses Obama, he’ll find his pet bunny rabbit boiling on the stove.”

According to the psychic Bernier, Clinton will likely haunt the White House. “She knows every nook and cranny of that place, because she was always trying to track down her husband, who was always trying to give her the slip. If I were President Obama, the first thing I would do when I got into the White House would be to call up Ghostbusters. If Barack doesn’t get kneecapped before the election, you can bet your bottom dollar he’ll encounter a tire-iron some night in the White House when he gets up to visit the toilet. Or some evening Michelle Obama will be lighting candles to take a nice bath and find Hillary in the tub with a knife.”

Meanwhile, Hollywood producers are optimistic that after Hillary is dragged kicking and screaming from the Democratic race, they can persuade her to play the scary new neighbor in Desperate Housewives.