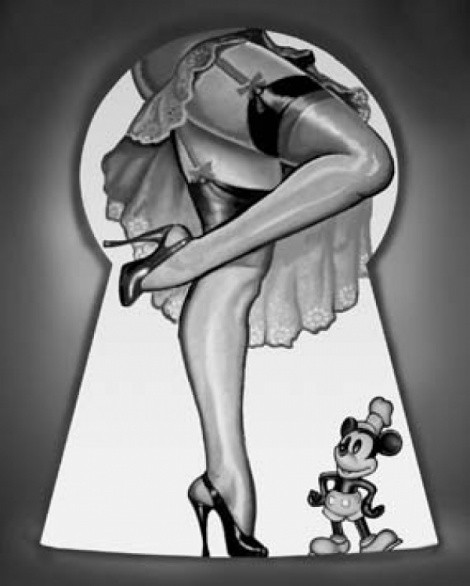 Hannah Montana was waiting for me on the Oasis café patio. The real Hannah Montana, not country-music has-been Billy Ray Cyrus’s daughter who’s now getting a lot of publicity for a sexy photo in this month’s Vanity Fair. People are upset because 15-year-old Miley, who plays Hannah Montana on TV, looks like she’s been captured by the camera in a moment of dreamy post-coital bliss.

Given all the ginned-up furor over the steamy photo shoot, I thought it would be instructive to visit with the real Hannah Montana, who herself experienced a few days of notoriety after appearing in a Playboy photo spread in the late ’60s. Ms. Montana was at first reluctant to sit down for an interview, asserting that she didn’t want to open up a chapter of her life that was long since closed. Married to a prominent local businessman, now retired, Ms. Montana has lived a quiet life in a leafy neighborhood in the upper Avenues.

“I had a long and fulfilling life as a stripper, but that’s all behind me now,” Ms. Montana said on the phone, adding, “of course, a lot of things are behind me now, including my big fat ass.”

Ms. Montana was exaggerating just a bit: She’s still an attractive woman, and her derrière, which during her heyday was widely admired for its callipygian properties, didn’t seem all that fat to me. She was wearing a well-tailored orange outfit and, though she ate her veggie burger with obvious relish, not a drop of sauce found its way onto her cream-colored blouse. After a few minutes of small talk about the Jazz, her fleeting friendship with Mitt Romney, and her interest in the latest science on the mind/body connection, we got down to business.

City Weekly: What did you think when Miley Cyrus stole your name and started calling herself Hannah Montana?

Hannah Montana: I was watching TV with my granddaughter, who knows nothing of my achievements as a stripper, and suddenly there’s this show about a girl called Hannah Montana. I damn near, well, since this is a family publication, I won’t say what I damn near did. But I did call my lawyer. He said, since she wasn’t a stripper, there was nothing I could do.

HM: A lot of people think it’s a made-up name, especially since I was often billed during my career as “Hannah & Her Amazing Montanas.” But Montana is an old family name. I’ve spent a lot of time at the church genealogy library, and we’ve been able to trace the name back to Michel de Montaigne, the famous French essayist. By the way, a cousin of mine, Bob Montana, played second base for the old Salt Lake Bees back in the ’50s. But Joe Montana, the quarterback, is no relation.

CW: What’s your opinion of the Miley Cyrus photos in Vanity Fair?

HM: Well, I’ll say this—at least she didn’t call herself Hannah Montana. But what’s the big deal? When I was 15 I was already touring the Midwest with Busby’s Lusty Burlesque. I came on right after Beverly Hills, who was already over the hill, speaking of hills.

CW: So you don’t think her seminude photo is one more example of the decline of Western Civilization?

HM: A couple of things: First of all, I’d say the photo is quasi-nude. Second, what I find a bit creepy is her posing with her dad—that’s really fraught with innuendo, in my humble opinion.

CW: What about the outrage from Hannah’s—excuse me, Miley’s, family?

HM: I would call it quasi-outrage. They obviously planned the whole thing. Look at all the publicity! It even got me out of retirement. The Cyrus clan figured it was time to make the transition from teenybopper to sexy virgin. After all, what’s her name, that Spears gal, is totally shopworn, and America is ready for the next sexy virgin.

CW: Are you implying that America is obsessed with sexy virgins?

HM: It’s a way to have their cake and eat it, too. Pretending to be shocked, outraged, by the sexy part, but secretly enjoying the titillation. It was a lot healthier in my stripping days when we were up-front and out-front with the whole business.

CW: Thank you for your time, Ms. Montana.

HM: I brought along some old photos. Would you like to take a look?