Deep End | Tortured Logic: Mitt’s embrace of waterboarding can be traced to a baptism in the Seine 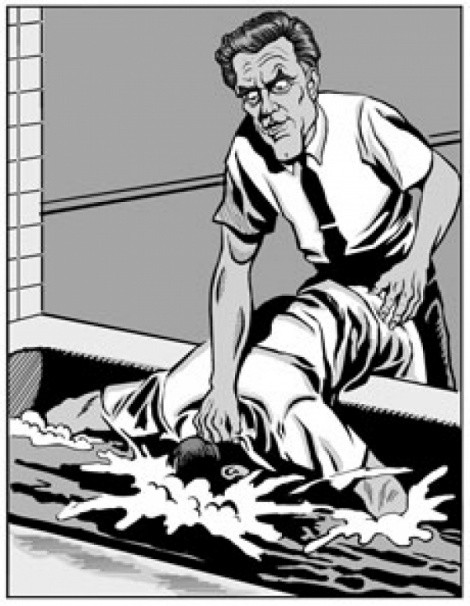 I’m getting tired of everyone beating up on my old missionary companion, Willard “Mitt” Romney. The latest example of how unfair everyone is to Mitt and how they misconstrue his every word, was the nasty criticism he got after the CNN YouTube debate in which he defended torture—specifically the very effective technique of waterboarding.

By now, everyone knows what waterboarding is, except for George W. Bush, who thinks it has something to do with catching a wave out in Malibu. Waterboarding is just a simple way of getting people to fess up by strapping them down, blindfolding them and then pouring water into their nose until they experience the sensation of death by drowning. It’s not really so bad—sort of like what happened when you were a kid and started laughing with a mouthful of root beer, and it went shooting up into your nose from the back of your throat.

Anyway, in that YouTube debate on TV last week, Mitt was very presidential in standing up enthusiastically for waterboarding torture. And he was not flip-flopping as he sometimes has a tendency to do—his defense of torture was consistent with his defense in a previous debate of “enhanced interrogation techniques.” (By the way, anyone who’s witnessed Mitt presiding at a bishops’ court, where wayward Latter-day Saints are subjected to loving excommunication, can attest to his skill at enhanced interrogation techniques.)

Just after he enumerated the virtues of waterboarding, that mean John McCain guy—he really needs to attend an anger-management course to get over the years of torture he suffered as a prisoner of war in Vietnam—challenged Mitt on the waterboarding question, accusing Mitt of not knowing anything about waterboarding. McCain is always playing the torture card, and in this case, by citing Mitt’s waterboarding ignorance, he was blatantly alluding to the fact that Mitt has no military service, and at the same time, calling Mitt out for his phony tough-guy persona.

McCain was also obviously engaging in Mormon-bashing, because everyone knows that Mitt didn’t fight for his country in Vietnam because he was dodging the draft by serving the Lord as my missionary companion in Paris. It was unfair that Mitt didn’t get a chance to talk about his own experience with water torture, based as it is on his extensive efforts in the field of baptism by immersion.

To give just one example: I can remember as if it were yesterday the time Mitt and I baptized our first convert, a shoe salesman named Blaise Pascal. We took him down to the banks of the river Seine and proceeded to wade in to a point deep enough to give him a good dunking. We should have known Monsieur Pascal would be trouble when he refused to remove his beret before the baptism. Then, when we started the usual, “Having authority,” etc., this damned Frenchman asked if we could just baptize him halfway.

I was ready to go along with his request, but Elder Romney, being what we call an Iron Rod saint, got pretty steamed and told the stubborn shoe salesman that if he didn’t shut his pie hole he would stuff his beret in his mouth. Even then, Mitt could be pretty persuasive, and our convert seemed to have got the message, though he did mutter a few French imprecations under his breath as we continued with the baptism.

By this time, we had drawn a few curious bystanders, a few of them laughing in their French way at three figures, attired in funny white outfits, waist deep in the muddy Seine. Because Monsieur Pascal had interrupted Mitt’s baptismal rap, we had to start over completely. Everything seemed to be going along fine but, just as Mitt pronounced “Amen,” all hell broke loose.

I don’t think any suspected terrorist ever struggled as hard as our cowardly French shoe salesman, who sputtered and struggled and screamed bloody murder as Mitt tried to get his whole head, along with that silly beret, under water. I’ve seen those tapes of waterboarding torture, and I know of a surety that our convert suffered a lot more than those guys having water poured into their noses. Mitt finally got him totally immersed and converted, and I know Monsieur Pascal is thanking Mitt at this very moment up in the Celestial Kingdom.

So I don’t want to hear any more nonsense about how my old missionary companion is just talking into his hat when he testifies of torture.